Trump is beating Hillary in the General Election in latest polling

posted on Mar, 7 2016 @ 08:39 PM
link
Georgia, Ohio and North Carolina are all showing Trump beating Clinton in the general election.

This is something that has not been widely seen and is showing that there is no ceiling for the GOP. The GOP needs to pull together behind one candidate but they are instead continuing to fracture the party with their rhetoric.

If the GOP train was stopping we would see falling polling numbers and although they lose to Bernie the gap is also closing there.

originally posted by: matafuchs
Georgia, Ohio and North Carolina are all showing Trump beating Clinton in the general election.

But a Republican has not polled that high. That was the point. This is not so much a Trump post as a GOP post.

posted on Mar, 7 2016 @ 08:51 PM
link
Honestly that's not saying much. A two years' expired can of the cheapest brand knock off of cream of chicken soup ought to be able to beat her, she's that flawed as a candidate.

I know what that says about the GOP that we even worry about whether or not we can field a candidate who could beat her, but honestly, I blame the GOP for not playing an effective media relations game. They've let their own brand get so tarnished that when Hollywood needs stock villains, the "Republican" card sits right next to the "Nazi" one, and it isn't because they really are that bad.

They've just let the Big Lie get told often enough that too many people are convinced it is.

posted on Mar, 7 2016 @ 08:51 PM
link
I'd rather have Trump over Hillary but that's not saying very much, at least Trump is entertaining but that hardly makes a good president. We're screwed either way though, the establishment wins no matter which one gets elected.

posted on Mar, 7 2016 @ 08:54 PM
link
If I am not mistaken RealClear also has Cruz pulling within striking distance of Trump.

After all the Anti Trump snip Cruz just might beat him out.

He is, but a lot of the next states are winner take all. There are very few opportunities to garner points for second place from here on out, so unless this past Saturday was an indication of some kind of groundswell shift in the primary electorate, he better get some game and fast especially with both Kasich and Rubio hanging around just to make things difficult.

posted on Mar, 7 2016 @ 09:01 PM
link
a reply to: neo96 That's true. But Florida will kill Cruz and if Trump wins Ohio which he probably will then its gonna be real hard for Ted. Ted cant beat Hillary anyway, the head to head polls are irrelevant, history shows that pretty well. Florida and Ohio are the kickers with all of the delegates. I think Kasich will last longer than Cruz. Trump has this one and the general in the bag unless he gets shot or dies another way. As long as uncool stiffs like Mitt Romney come out and bash Trump he will do well. Does Mitt know that he is offending millions of people and pissing them off ? I have to wonder. These are just my opinions, glad someone is looking at the delegates. Now they are focusing on the high delegate counties in states, every state is kinda different so its too complicated for me. We shall see !

If Trump maintains his lead after tomorrow I will say he's will be the nomination.

IF Cruz cuts more in to his lead. Trump needs to worry.

posted on Mar, 7 2016 @ 09:08 PM
link
The funny thing about all these polls, is that regardless of what the data says, positive or negative for anyone or against anyone, things can change OVERNIGHT, and there is still a lot of time before November.


originally posted by: matafuchs
Georgia, Ohio and North Carolina are all showing Trump beating Clinton in the general election.

Ohio is very much a PURPLE state. It goes either way come election time and for Obama in the last two. Get your facts straight.

Yeah, well, there were polls that showed Trump up in Kansas by 10 to 15 points prior to Saturday too. I think one solid given this year is that there are no real givens.

What makes a state Red or Blue ? 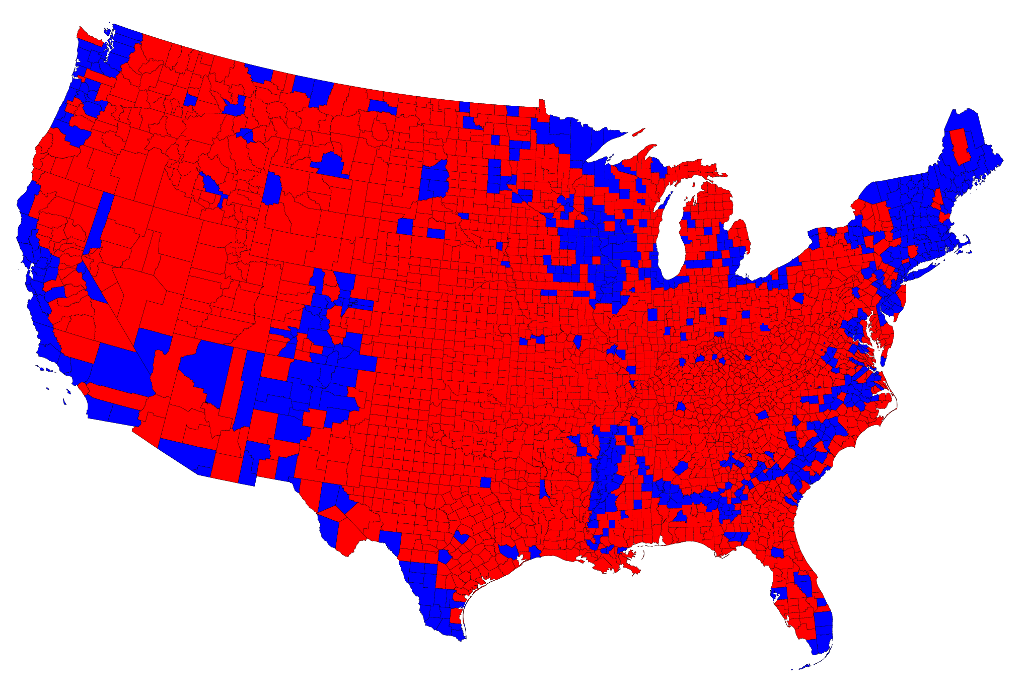 Who holds the 'majority' in the state legislators ?

Most of the country is RED.

With pockets of BLue.

That graphic doesn't at all represent the size of the populations though, so saying most of the country is red isn't very accurate. Which is exactly why we need strict popular vote. Electoral college & delegates to an extent are merely ways to abuse the dispersion of the population.

The areas in Red represent 'Republicans', That do 'control' the largest area of land mass.

The areas in blue represent 'Democrats', That do 'control' the least area of land mass.

At any given time. Only a hand full of States determine our elections.

Which is a very flawed system.

I'm not sure I understand you. Control of land mass is irrelevant (or at least should be). If you took half the democrats in California & spread them into a bunch of red states they would still vote the same. The electoral college is what corrupts the actual votes of the people based on where they live.
Population size of a certain area/state shouldnt matter in the least. There are still dems living in red area & reps living in blue area. Electoral college only forces people of alike ideologies to clump together & to deter people from moving to a new state because their vote may matter less.

Also I have a question, why do you Trump supporters use polls to show Trump winning , yet polls put out by the same people you tout as evidence of his winning, say he CANNOT WIN against Hillary one on one...

"Trump is beating Hillary in the General Election in latest polling"

Please explain how you can honestly feel justified in making that statement? You cherry picked older polls from three states and completely ignored more recent polls from other states and two national polls — which all show both Clinton and Sanders leading Trump.

I can't tell if this analysis of yours is delusional or disingenuous.

I think you've confused democracy with the board game Risk.