A fable is "a short story devised to convey some useful lesson, an apologue". A distinctive feature of the fable is that it contains a moral truth.


Aesop, also known as Phrygian. c. 620 B.C.E. - c. 560 B.C.E. Thought to have been Ethiopian in origin. Possible point of origin could have been Turkey as well. ( and a few other places, I guess it's still up for debate) Scholars are unsure if Aesop actually existed or was a pen name for another writer, although he is mentioned in early Greek writings by Aristotle, Aristophanes, Athenaeus, Plato, Callimachus, Lucian, Philostratus, Pliny, Plutarch, Seneca, Strabo, and Zenobius. The first mention of Aesop himself being 100 years after his death by the Greek Scholar Herodotus.

Aesop was/is one of the more popular fable tellers. He never wrote his fables down, they were always told orally. The earliest mention of the collection was by Demetrious of Phalerum, an Athenian orator who compiled the fables into a set of ten books. A follower of Aristotle, he simply cataloged all the fables that earlier Greek writers had used in isolation as example, putting them into prose.

Aesop was known to have a speech impediment which has been described as slow, inarticulate, and obscure, it could be construed that because of his origins, he was just not familiar with the language. Believed to have been a taken from his birthplace and brought to Greece as a slave, he would've had a language barrier to overcome. Thus the slow and inarticulate speech. One of the tales about him refer to how he was freed from his speech impediment later in life by a deity. Which also adds credence to the possibility that he was just trying to learn the language and finally was able to do so. (personal thought) 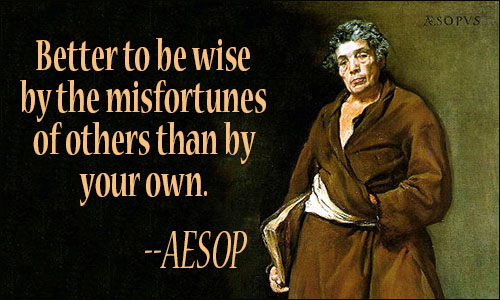 He was thought to have severe deformity of his body. Descriptions of it include "in every part so very deformed, as to render him the lowest object of contempt." "A thing that nature in a merry humor has made half man, half monkey". The anonymously authored Aesop Romance begins with a vivid description of Aesop's appearance, saying he was "of loathsome aspect... potbellied, misshapen of head, snub-nosed, swarthy, dwarfish, bandy-legged, short-armed, squint-eyed, liver-lipped—a portentous monstrosity." Another reference to his appearance is by Himerius in the 4th century, who says that Aesop "was laughed at and made fun of, not because of some of his tales but on account of his looks and the sound of his voice." Some more references to his appearance have been noted within other areas of literature. All mostly portray him as undesirable in appearance.

So, now I have this picture in my head of a person of some intelligence that was trapped within his own body. (Not able to speak, undesirable in appearance.) But yet, he was able to somehow overcome these things and get his name and fables forever captured within the pages of our literary history books. Albeit a few hundred years after his death..but still, how many of us will be able to say that?


So, I wanted to speak a bit about him before I took a few fables and placed them here. There is a lot of conflicting information about him out there. His birthplace and aliases, whether he is the author of all these fables is still up for debate. But, the fables themselves, whether or not he wrote them, are well worth the read in any event... 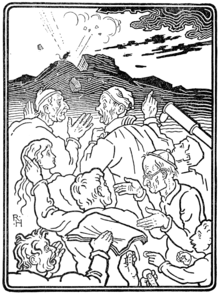 The Mountains in Labour -

One day the Countrymen noticed that the Mountains were in labour; smoke came out of their summits, the earth was quaking at their feet, trees were crashing, and huge rocks were tumbling. They felt sure that something horrible was going to happen. They all gathered together in one place to see what terrible thing this could be. They waited and they waited, but nothing came. At last there was a still more violent earthquake, and a huge gap appeared in the side of the Mountains. They all fell down upon their knees and waited. At last, and at last, a teeny, tiny mouse poked its little head and bristles out of the gap and came running down towards them, and ever after they used to say: ‘Much outcry, little outcome.’ 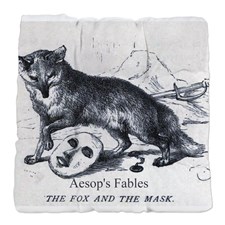 The Fox and The Mask

A Fox had by some means got into the store-room of a theater. Suddenly he observed a face glaring down on him and began to be very frightened; but looking more closely he found it was only a Mask such as actors use to put over their face. ‘Ah,’ said the Fox, ‘you look very fine; it is a pity you have not got any brains.’ Outside show is a poor substitute for inner worth.

The Hares and the Frogs

The Hares were so persecuted by the other beasts, they
did not know where to go. As soon as they saw a single
animal approach them, off they used to run. One day they
saw a troop of wild Horses stampeding about, and in quite
a panic all the Hares scuttled off to a lake hard by,
determined to drown themselves rather than live in such a
continual state of fear. But just as they got near the bank
of the lake, a troop of Frogs, frightened in their turn by
the approach of the Hares scuttled off, and jumped into
the water. ‘Truly,’ said one of the Hares, ‘things are not so
bad as they seem:

‘There is always someone worse off than yourself.’