That's an interesting report from 2009. They've been analyzing this failure scenario for some time. The worst case scenario in that report was 54% of Mosul completely flooded. In the news article those engineers speculated it may be as much as 75%. Estimate of casualties range from 100,000 to over a million.

Here's some interesting data for the worst case scenario as predicted in the referenced report: 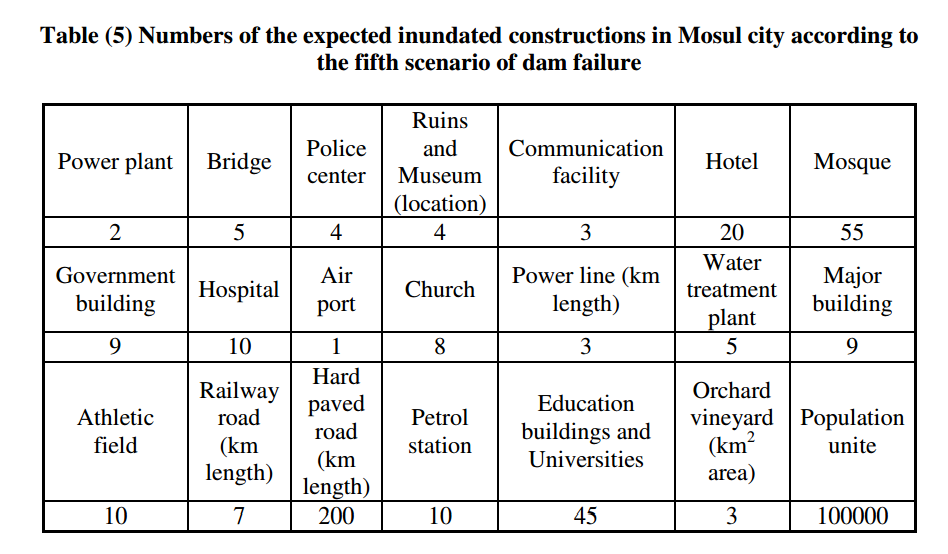 And some of those facilities will be inundated by 25 meters (82 feet) of water or more. Mosul will be slammed with a flood of biblical proportions. It will look like the apocalypse. Video footage of the destruction of Mosul will become standard fare for apocalyptic edutainment for generations.

One final takeaway from the news article I found interesting:

“We used to have 300 people working 24 hours in three shifts but very few of these workers have come back. There are perhaps 30 people there now,” "The machines for grouting have been looted. There is no cement supply. They can do nothing."

That's 2400 work hours per day dedicated to maintaining the dam. It has been 567 days since the dam was retaken on August 18, 2014. For a total of over 1.3 million work hours of missing maintenance time.

The Iraqis have finally brought in a contractor to address the problem. But it will take several more months before they can start doing any work at all. With the coming Spring floods, the dam may not last long enough for them to get started.

It's hard to imagine a government that is so incompetent that it would take the chance of this dam's failure, given the consequences of massive property damage and loss of life.

This being a conspiracy website, I can't help but put on my ol' tinfoil and wonder, could the dam's collapse be intended? The CNN video refers to an ISIS-controlled Mosul, that would be inundated. I also notice the CNN video blames corruption, instability, and bureaucracy for the dam's disrepair, but not military occupation.

posted on Apr, 8 2016 @ 09:51 PM
link
I recall reading about it (the dam) when ISIL had taken control of it. They were using it like a WMD to gain leverage. Supposedly if the dam collapsed it would result in a catastrophe of biblical proportions, with deaths exceeding a million. It was considered a significant victory by Iraq when it was taken back.

Somehow I have a feeling that this wouldn’t be an issue if Saddam Hussein was still there and in power. I don’t want to derail the thread or send it off on a tangent, but I can’t help but think the U.S. is somewhat responsible for setting the stage here. Personally, I think when they pulled Saddam Hussein out of that hole in the ground over in Iraq they should have brushed him off, said, “Sorry about blowin’ your kids away”, given him back the keys to the Kingdom, and then got the hell out of there. They, and we, would be so much better off today had we not meddled in their affairs back then.

Unlike what we were being told back in ’02/’03, Hussein hated the likes of Al-Qaeda and did not permit Islamic terrorist groups to setup operations in his country. In his mind they posed a threat to his authority. But, in our infinite wisdom we launched a pre-emptive strike anyway, and then proceeded to decimate the country and dismantle it’s social/political structure. I still believe it was a Bush/Cheney/Rumsfeld vendetta.

At any rate, I believe it was the bad choices we made back then that inevitably led to the chaos and mayhem we see today in the ME. In a more stable Iraq that dam would probably have been more adequately maintained. If it’s breached it might lead to a disaster like humanity hasn’t seen in modern times. I’d be very nervous right now if I lived in it’s kill path.

And like a good sociopath, Dick Cheney won’t see the link from what’s happening today in Iraq to the cowboy, shoot ‘em up tactics he advocated for back in the day. What a piece of work; he won’t even lose a wink of sleep over it.

So much for my rant. Didn’t mean to get too far off-topic.