posted on Mar, 6 2016 @ 12:05 PM
link
Recently i've been playing Far Cry Primal a lot so i decided to lur karound for Plestoicene cryptids like the infamous Siberia Wooly Mammoth. So this is when i came across a famous, but not well know Cryptid know as "Ennedi Tiger." In Sumarry, the Ennedi Tiger is a Cryptid from the Ennedi Plateau (thus it's name), located in the east of Chad, in Sub-Saharan Africa.

According to scientific orthodoxy the African sabre-toothed tigers, such as Megantereon and Afrosmilus died out 500,000 years ago. However, in certain African countries such as the Central African Republic and Chad, sabre-toothed tigers have been seen by the locals in modern times.

There are reports of two different species, one that mainly inhabits the mountains (called Hadjel, Gassingram, or Vossoko), and a Water-inhabiting one (called Mourou N'gou, Mamaimé, or Dilali). According to the natives, it's in fact, a living saber-toothed cat or Machairodus, a genus of Saber-tooth that went extinct 10 million years ago.

This legendary creature occupies a typically mountainous north-south geographical area which extends from almost the Tropic of Capricorn (Tibesti) to just south of the equator through the regions of Bahr-el-Ghazal and Mount Kenya.

The area follows a ridge formed by the Saharan highlands of Erdébé, the Mourdi depression, Darfur, the mountains of the Bahr-el-Ghazal, and finally through the mountains of Uganda to Mount Kenya, therefore forming a continuity of habitat covering thousands of kilometers.

The Ennedi Mountain Tiger is a cryptid reported from the Ennedi Plateau in Africa.

An aquatic form, the Water Tiger or Water Jaguar, is also reported. The Tiger is calle tigre de montagre by the French people of Ennedi.

The Ennedi Tiger is an aggressive predator, and very powerful - strong enough to carry a whole antelope. It makes howling noises, if some reports are to be believed. Allegedly, it sometimes kills hens and other livestock, slitting their throats but not eating them. Both the mountain and aquatic varietys are said to be nocturnal and cave dwelling. It's said by natives it's easily able to kill a Hippo.

The ennedi Tiger is described as being an indredible rare animal, avoid humans and often living on mountains and caves, not leaving tracks behind and being bigger or slightly bigger than a Fully adult male lion. Although it is also larger than a lion, about 2–4 m (8–12 feet), very fierce, and has protruding teeth. The animal's color pattern is red with white markings (comparable to mountain cats), to leopard-like with stripes, to uniform brown. Its teeth are always described as "walrus-like" and the tail is always long in reports. Some have suggested an otter as a candidate. Its habitat extends into the Central African Republic. There are also tales of water lions in folklore in Congo, Angola, Zimbabwe, Kenya and Sudan. A cave drawing that illustrates a walrus-like creature with a long tail exists in South Africa.

the last lions in the Sahara also survived here, until they became extinct before mid-20th century (the last lion was seen in 1940) 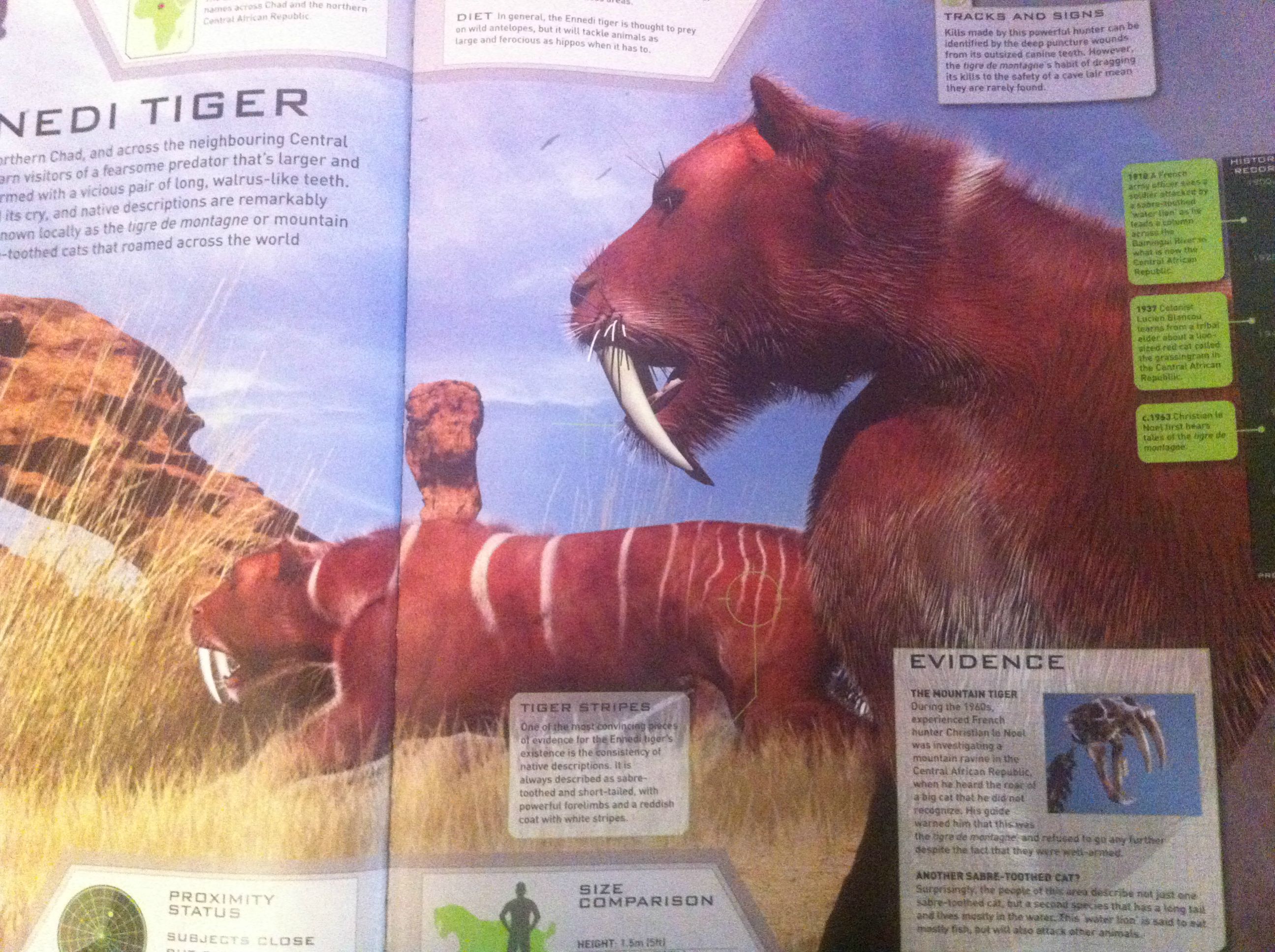 A meganize featuring the Ennedi Tiger

“Among legendary animals, the "Mountain Tiger" has a special place, because its story is common to different tribes and races, which have never come in contact with each other.”

Natives and other people living around the mountains of Ennedi have seen the Tiger for generations - it features in the legends of people for miles around. These people are illiterate, and could not know about sabre-toothed cats if they had not seen them. They are also excellent trackers, familiar with all native big cats, and so would know if the Tiger were a known animal.

In the Bamingui Prefecture in the northern Central African Republic, along the Bamingui River, we have a visual and written testimony of a European that dates back to colonization, in 1910, It seems a column led by a French officer and a subordinate officer, and escorted by Senegalese tirailleurs (literally "skirmishers"; a corps of colonial infantry in the French Army), went back to Chad to punish the rebel Rabba Chadien who had just slaughtered the administrator to Bretonet Niellim north of Fort Archambault.

To cross the Bamingui, it was necessary to do it on pirogues (large canoes) being able to contain about ten people, is at the minimum 700 kg. Under the eyes of the officer that oversaw the crossing, a "water lion" attacked one of the pirogues in the process of crossing, and seized itself of a tirailleur that it took below the water. The officer did a complete report on the incident that remains to this day in the military archives

Marcel Halley, a hunter of Gabon in the 1920s, witnessed a strange fact: hunting in a vast marsh, his attention was attracted by groans from the reeds, he came and found a female Hippo slaughtered by an unknown beast. It had gaping wounds that had not been made by another hippo, because only the males of this species fight among themselves, and their wounds are characteristically identifiable. The animal also had several big, long and deep wounds, which could not have been done by the tusks of a hippo. The beast also had a huge hole under its neck and another on the shoulder.

In the mountainous Tibesti region of Chad the sabertooth is known as "nisi" or "noso." It is said to attack hens and slit the throats of goats without eating them. There are completely black specimens. In 1975, Christian Le Noel was leading an eland hunt from Derby near the river Ouandja, 15 miles from Tirongoulou on the Chad-Sudan border, when he heard a howling from a cave like nothing he had heard before. His tracker refused to go any further, saying that it was the sabertooth.

The ennedi Tiger has a very interesting LORE. Looking for more info o nthe Ennedeau Plateau i actually found that the region is vastily unexplroed and bastly unhabithed, possesing inumerous paradisiac locations whitin due to it's remotness and size. Animals like the Scimitar oryx which are tought to be extinct in the wild are belived to still lurk in the region. Even tought i find pretty slim the chances of sabered-tooths being alived today. It's nice to check out.

What do you think about this cryptid?

posted on Mar, 6 2016 @ 01:46 PM
link
Good thread. Thanks for the info, as I hadn't heard of this one before. Strange coincidence, I was was just playing Ark Survival Evolved running around the island on my sabretooth causing mayhem...

Great thread !! It amazes me how much we really don't know about this planet. Always loved tigers they are badass.

originally posted by: cavtrooper7
Simple to catch if it lives in a cave.
Is the terrain cavernous?

Many caves, the Ennedi Plateau posses many mountains and is a simillar landscape to Savanah mixxed with the mountains of Arizona.

Thanks for notifing me, i will use next time

which means a nightmare to hunt for any critter.