Everyone I know thinks McGregor needed a loss to bring him back to reality.

originally posted by: haven123
the prick got humbled he has zero ground game. i laughed

even more ironic is the name of the club he had booked for his after party when he won.

He did you are correct...I knew he didn't want any part of being on the ground with a Diaz, who have mad Jiu Jitsu skills.

I didn't laugh, although I agree McGregor needs to realize any man can be beaten any day. He realized that last night! Thanks to a street kid from Stockton, CA.

It was a good fight regardless!

OMG Haven123...I am laughing so hard I'm crying! Surrender is what he did! If that's not insane!! Thanks for that info.

I agree...I have no idea WHY he would attempt to fight at that weight. He's a force at 145! But 170, is probably almost his natural weight causing him to be slower. I noticed he got tired so quick.

posted on Mar, 6 2016 @ 11:46 AM
link
You guys are looking to deep. For a million Conor would have fought close to anyone even if guaranteed to lose. This was a win win win/lose.

Conor needed this fight to lay the foundation of work to come.. He simply tested his future.

As for the fight...
This is how I expected it to go. The weight jump hurt but you have to give it to Diaz. He is much better than given credit to.....much better.

His chin is close to unmatched. However Conor was cocky and dropped his hands trying to show he can take the punches. This led to him being stunned and finished.

I agree with this. Diaz is so hard to finish, for anyone. Being a McGregor fan, I just hated seeing him lose. As much as I did not want to bet against him, I predicted the fight the same way. Still didn't like it, but Diaz was a better fighter at that weight. He deserved and got the W. Hopefully Diaz will now get more opportunities at top 10 fighters. He is deserving of that!

if he won he would be hailed a genius, he takes risks thats what i like about him his assholness is what i dislike
plus welter is his natural weight he cuts to much to fight smaller guys he looks emaciated in his lightweight fights especially the weigh ins
edit on 6-3-2016 by haven123 because: (no reason given)

Conner did drop his hands and showboat to much....but some things were working very very well for him....like the uppercuts....but Conner was kicking the wrong leg....he should have kept his distance and planned for a longer fight and chopped the left leg down...not the right leg......and those uppercuts didnt have to be his primary weapon so early they would have been there all night long because Diaz couldnt defend them.....so patience was not present....the tactical foresight was there.....so in a nutshell had Conner kept his hands up and tagged Diaz with a few solid dangerous uppercuts BUT THEN used his left hand as his primary focus and kept further out of range during the first 2 rounds and chopped the LEFT LEG DOWN not the right leg planning to benefit in the 3rd and what should have been the final round.....well then stick-legs Diaz would have had a hematoma the size of his heart on his LEFT LEG and been desperate and vulnerable and he would have been planting his feet even more than normal and those UPPERCUTS if doubled in volume in the 3rd round might have ended the fight if used in the 2nd or 3rd sequence of a combonation.The way I saw it Diaz was broken up BAD...and had the fight gone into deeper rounds he would have fallen apart or it would have been stopped.....patience and a bit of planning was missing from Conners gameplan.....those were the only things wrong except for the major error of chopping on the wrong leg IMHO.

Conner erred in standing back where he thought he was out of range where he was on his heels like Silva has been caught doing.......it was only when Conner was far out where he "thought" he was safe that he let himself get caught flatfooted and that is where Diazes punches hurt him.He hadnt worked the LEFT leg chops long enough and hadnt waited for the hematomas to take effect and as a result Diaz had the energy and ability to stretch out and lean forward to land those very long range punches which changed the entire fight.

posted on Mar, 6 2016 @ 01:30 PM
link
Mcgregor was used to featherweights crumbling at his left hooks and had no plan B. At featherweight he has height, strength and reach advantage. He gave that all up moving up from 147Ib to 170Ib. He was getting jabbed in the face from a guy with a longer reach with his hands down. That extra 23 pounds was not all muscle it was dead weight, he obviously skipped a bit of cardio to put that weight on. The result was that he was gassed out. Instead of being knocked out, he took Diaz down to submit.

originally posted by: Debunkology
Mcgregor was used to featherweights crumbling at his left hooks and had no plan B. At featherweight he has height, strength and reach advantage. He gave that all up moving up from 147Ib to 170Ib. He was getting jabbed in the face from a guy with a longer reach with his hands down. That extra 23 pounds was not all muscle it was dead weight, he obviously skipped a bit of cardio to put that weight on. The result was that he was gassed out. Instead of being knocked out, he took Diaz down to submit.

even at lightweight he is # on the floor, i dont know the guys name of the top of my head but he was getting destroyed on the ground with elbows

You don't have to be too hopeful, Dana said a matchup with Lawler is probable. That heat in Conor's left marked up Nate's face; Lawler's left-handed heat will put him to sleep. I hope Dana pays the man if he's gonna toss him in the cage with Lawler next - Nate earned and deserves a shot at a the LW strap - because there's no conceivable path to the WW strap (e.g. it's his brother's division, Rory already beat him pillar-to-post, etc.).

If Nate was gonna ever step out of his brother's shadow, last night had to be it. I think a confident and focused Nate can beat anyone at 155. Khabib is the one guy Nate has to avoid and Dana White and Joe Silva and Sean Shelby have to throw him a bone: catch RDA pissing hot and vacate the belt with a 4-man, one card show. Build hype around a known commodity (Nate) and toss in some intrigue (Conor moving up for a potential rematch after Nate beats Ferguson for LW strap). Nate gets paid and is champ. It'd be nice. Wishful thinking. Just hope Nate enjoys this for everything it's worth.

Sadly, Dana White is probably about to make a very profitable move and match Nate up with Robbie (UFC 200?). I hope not. Nate could effectively parlay his confidence at 155. Could grab the belt and successfully defend it a few times at 155. Could use this win as his golden ticket by cashing in for a lifetime (it is alleged Conor pulled down $10 million last night) on a champion versus champion rematch. None of this is possible at 170 and Dana knows it. A Diaz as champion? Dana would stroke out. This isn't Chael Sonnen logic, it's the truth. No way Dana even lets Nate's future simmer, he's gonna extinguish his fire before it even starts to smoke. I'll hope against hope that it doesn't happen, but you shouldn't worry whether Nate gets "more opportunities at top 10 fighters ". He's about to get what he doesn't want. Or deserve

originally posted by: subfab
a reply to: angryhulk


getting tagged was what effected his speed this guy thinks he could beat mayweather in a boxing match i doubt he could beat any pro boxer at boxing, floyd would box his head off

posted on Mar, 6 2016 @ 03:43 PM
link
McGregor is good for the UFC and I just had this feeling that Diaz was gonna make him eat his words. Once Diaz rocked him in the 2nd McGregor couldn't recover. I think it was too much on little time. I did like seeing him get beat as well but he'll be back.

McGregor kinda lost hes cool and Diaz played very well, whole fight McGregor tried to prove hes words from some trash talking but Diaz is not easy one to knock out or shut up and McGregor burned hes arms and legs trying to do so. Very good job by Diaz for the finish, he took some serious hey makers and still kept hes cool waiting and baiting, its not even new thing with Diaz brothers how they make their opponents overly emotional and then use that against them selfs.
edit on 6-3-2016 by romilo because: (no reason given)


Gotta say that if McGregor keeps hes cool in the fight and follows hes gameplans bit more, he will do just fine in the weight class, also ground work might need some escapes etc.
edit on 6-3-2016 by romilo because: (no reason given) 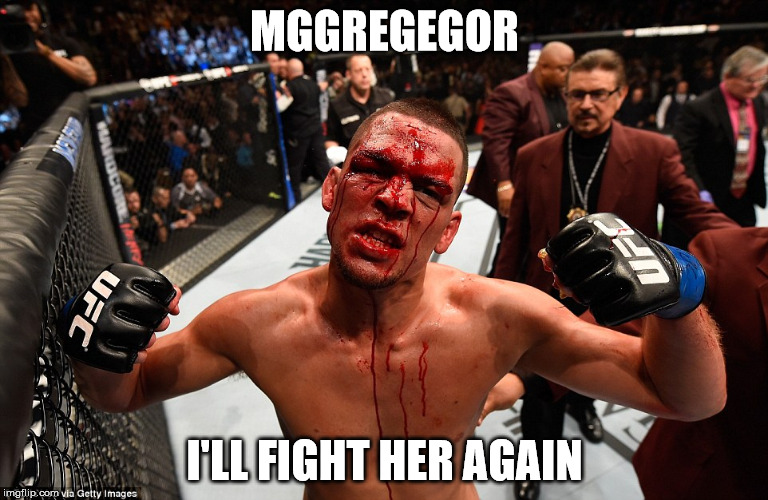