Woodpeckers are actually drumming rather than just feeding study finds

posted on Mar, 5 2016 @ 09:04 AM
link
It makes sense to me that a bird that spends most of its life banging its face against a tree is a drummer , researchers at Wake Forest University say that Woodpeckers are actually drumming when we hear them pecking at trees rather than as most people like me think just looking for food.

Wake Forest assistant professor of biology Matthew Fuxjager says their drumming is also used as a social device to communicate or to assess the potential danger of threatening rival males , if a rival has a short drum he's seen as less threatening than a rival with a longer drum , kinda makes sense really.


“Partners will actually coordinate or cooperate with how they fight depending on who they are fighting. They size up their opponent and decide whether they need to work together,” Fuxjager said. “In short, it means an intruder woodpecker with a short drum is perceived as wimpier, while a long drum signifies a tough guy intruder.”


What they found is that if you present a breeding pair of woodpeckers with a longer drum from a more aggressive intruder, the pair begins to coordinate their territorial defense behavior and coordinate how they attack the intruder; whereas, a shorter drum from a weaker intruder meant that the resident pair didn’t bother to coordinate a response.

Overall, Fuxjager said these findings, recently published in the journal Behavioral Ecology and Sociobiology, provide insight into aggressive behavior in birds in general and how individuals coordinate behavior to accomplish shared goals or tasks
news.wfu.edu...

I like Woodpeckers and welcome them it to the drumming fold , I like their bright colouring and the way they look but I also like that they've been known to give lifts to their friends. 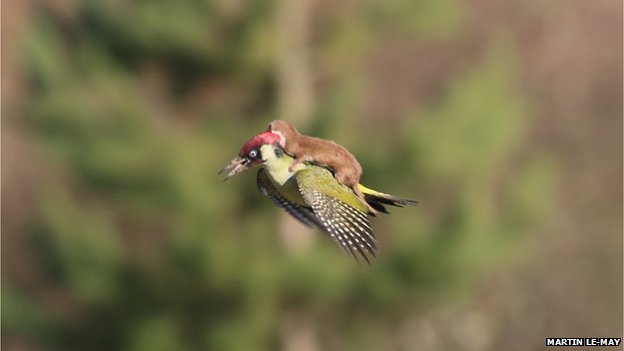 
Wake Forest assistant professor of biology Matthew Fuxjager says their drumming is actually used as a social device to communicate or to assess the potential danger of threatening rival males , if a rival has a short drum he's seen as less threatening that a rival with a longer drum , kinda makes sense really.

I can believe that they drum to communicate.
But I believe that they also use their beaks to drill holes into trees to extract insect larvae with their very long tongues.
If the beaks were intended only for drumming, they would have evolved to look like a drumstick instead of a chisel.

posted on Mar, 5 2016 @ 09:19 AM
link
A surprising amount of women seem to be attracted more to the drummers in a band at a live show, from my anecdotal evidence.
No, I am not a drummer.

posted on Mar, 5 2016 @ 11:06 AM
link
Well, my study concludes that they are actually storing and stashing food. Just this week I removed and replaced several trim boards on a home with extensive woodpecker damage. I kid you not, upon removing these damaged boards, hundreds and hundreds of acorns came pouring out, exactly like hitting the jackpot on an old slot machine. It was amazing how many acorns those woodpeckers were able to stash! There is no doubt that they pecked this house up in order to store their food. Very cool picture, btw. I had no idea woodpeckers offered their friends rides.
edit on 3 5 2016 by Tuomptonite because: (no reason given)

posted on Mar, 5 2016 @ 11:30 AM
link
Just a few weekends ago, I was visiting my Mom and there was a woodpecker banging on the top part of a telephone pole. In between 2 or 3 series of bangs, it would make this weird yell. I couldn't catch enough of a pattern to say for sure that it was a "song", but it definitely wasn't doing it for food. My Mom said that woodpecker and another one will do that at random times through the week, sometimes for a really long time.

On the other hand, there are woodpeckers that attack my Dad's house every summer. It turned out they were doing it to get the carpenter bees that making burrows in random segments of wood in the neighborhood (including his deck).

In short, I agree that they do it for multiple reasons. I actually respect them a lot because of their persistence and the weird way they "climb" trees. Plus they look really freaky up close.
edit on 5-3-2016 by enlightenedservant because: misspelled "pole". smh...

I'm surprise to here that some professor has discovered that tactic of woodpeckers. If he had asked me years ago I could have told him that I figured that out when I repeated heard and observed woodpeckers doing their number on the tops of electrical power poles that are treated against insect invasions. Those poles make a far better, more resonating drum than any ol' tree.

And between the noise he makes when he is in a drumming mood and the mess he makes. I would like him to go away.

This winter I saw something odd looking on the ground, I go into the woods and discover, this thing is just tearing up the top of this dead tree. He has pecked off large pieces of the top, and when we get a good North wind that tree top is coming down.

Is there any way to get rid of these birds?

I have been told it is illegal to shoot them.
edit on 5-3-2016 by crappiekat because: forgot link

IIRC Pileated Woodpecker's favorite food is carpenter ants. Get rid of the ants the birds will move on. Unless they have decided to nest there and then welcome to the new neighbors!!

While we have some smaller woodpeckers here they haven't fixated on one area, this could be your heads up into a bug infestation that could eventually affect your home? Maybe a good thing this got your attention?

Thank you, never thought of that.

I actually do have alot ants. Well I guess I have some ant study to do.

I really think it is cool how one animal effects another animals habitat.

And a big Thank You to Gortex for making this thread.

I did want to add. I think woodpeckers are a beautiful birds. They Just don't make good neighbors. LOL!!!
edit on 5-3-2016 by crappiekat because: (no reason given)

I agree with Caver78 about insects luring them in. In a way, it's a good thing that you know about the woodpecker because you may be able to stop things w/the possible insects before they get worse.

I've found that the ones here absolutely hate shiny things. I placed a thick, clear, shiny tape over 2 areas they "attack" on the deck and they left the entire deck alone. In fact, they don't seem to come back as long as the shiny tape is there. I used to go outside and scare them off (it was one male in particular), but eventually it stopped worrying about me. Now there are several males and at least 1 female, but they go everywhere except our house.

Here's a pic I took several years ago of the main male. He actually came around the back of the house and was looking at me from the porch. I only had time to get one pic before he flew off. This was a few days after I first scared him off lol. He had come back each day, got tired of getting run off, then it seemed like he went out back to size me up. 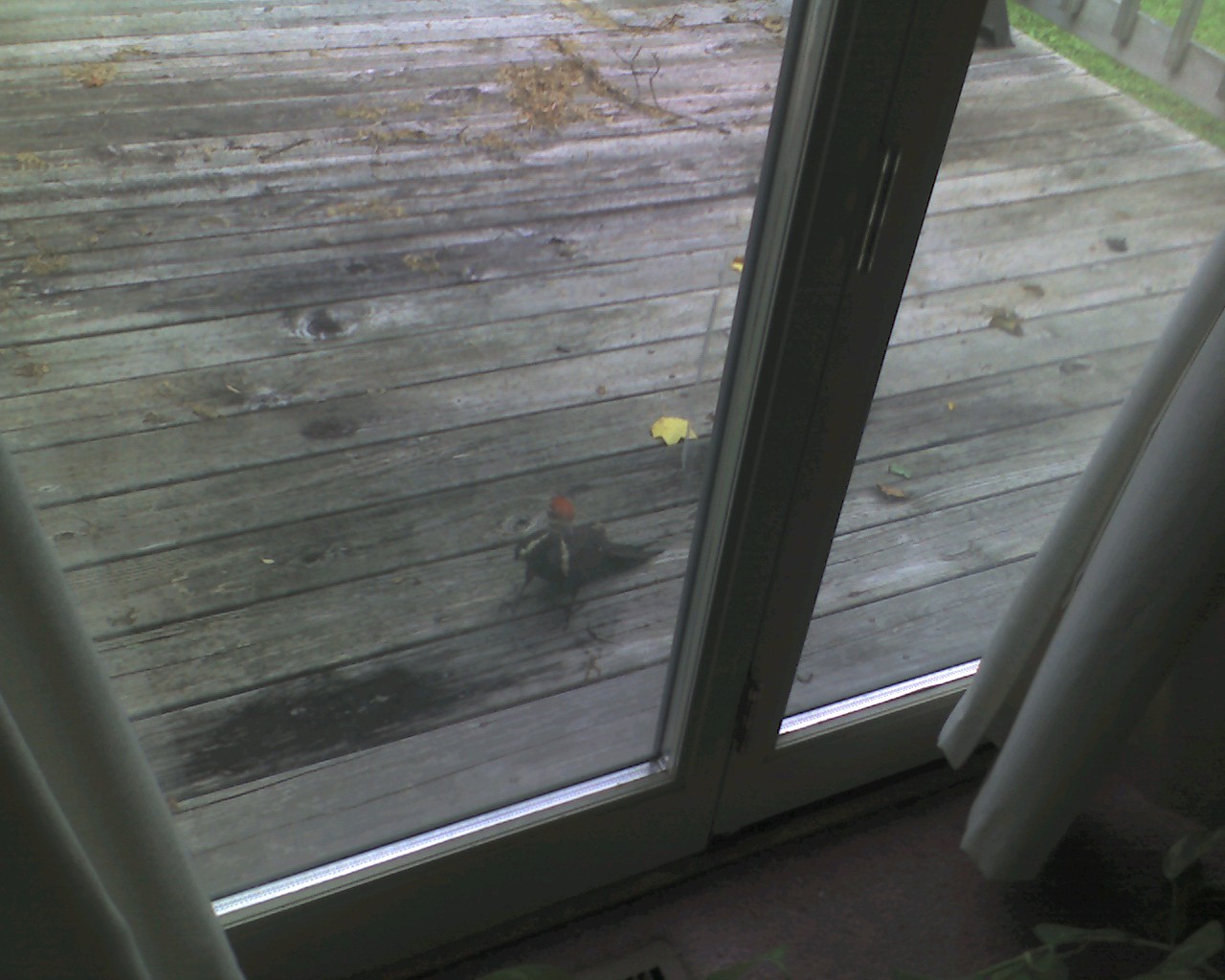 That's one thing that's makes me alittle nervous. I am afraid this thing is gonna challenge me. pileated woodpeckers are large birds, and if he felt myself or my pets were threatening him he might try and come peck my head.

The shiny thing is something I heard from others. This spring I do plan to put out shiny wind chimes. The tape sounds like a good idea too.

Every time I "scared" it off, it would fly into a nearby tree then watch me. I think it realized that I wasn't actually trying to kill it or eat it since I never chased after it any further. But I've never heard of one attacking people (not to say it can't happen).

I was surprised when it came to the glass like that. It was seriously curious about me lol. It would hop from one side to another to see me better, and as you can see, it let me get relatively close. Maybe it knew the glass was a safe barrier? I just wish I could've gotten my phone out quicker because it was there for around a minute.

Oh yeah, I heard that the wind chimes work well, too.

Short post warning...anyone mention the internal shock absorbers that woodpeckers have between their skull and their brain?