posted on Mar, 4 2016 @ 02:54 PM
link
When I first watched the movie, I had what I would call an unrealistic fear of it coming true. I shrugged it off, but can no longer pretend its not happening.

I see it everywhere, Trump (I honestly think he is a great guy but did he just wake up one day and think "im going to run for president"), Trump supporters are even worse, I see it here...calling any political figure who does not hold posters exact beliefs the anti-Christ.

Its not Trump, its the people. If he wins or not, there are still the dumbed down people, they will always be there and they are spreading, taking office, making America dumber, its an ongoing night-mare of mine.

posted on Mar, 4 2016 @ 03:04 PM
link
Ya i've been watching this happening for a long time now..and please do not blame it all on politicians,however odious those creatures are. When shows like Jersey Shore has enough viewers to keep it financially feasible thus on air..you really cannot blame Any politician.They can do a lot,but they cannot physically be in so many homes to put a gun to all those heads to force them to watch that kind of contemptible drivel-just ONE example. 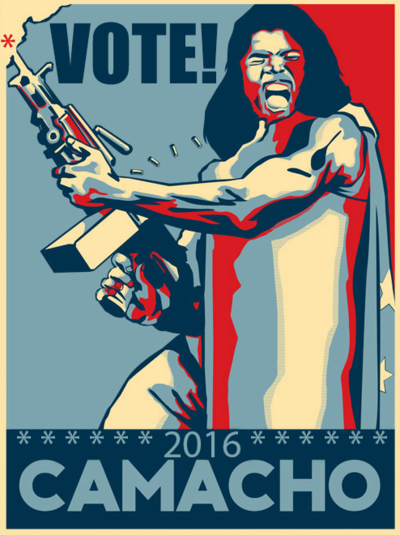 Yes, I agree, however, these Jersey Shore viewer types are running for political seats (ex. Trump). I have good friends that watch Fox News as if it were the only news source on TV. I try not to think about it but its mesmerizing in the most uncomfortable way possible.

Where did you get this "woke up one day..." nonsense?

You should at least do a minimal amount of your own research before starting a thread on a subject you clearly know absolutely nothing about.

Trump has stated his intention to run for president since the 80s and actually did enter the 2000 race as a Reform Party candidate. This is all very well documented and easy to find.

Sure there are idiots around in all guises. However, in the main we are an intelligent breed.

Maybe it will happen, but give it until a catastrophe to occur and I am almost certain that this is what we will be left with.

exactly, he woke up one day and thought "man, I have enough money that I should just run for president"
He took a reality show detour and got back to it.

I don't even Have tv service,for quite some years now. Well we have the set,we need the screen for playing PS games on.My daughter likes Two Broke Girls but she downloads episodes and watches it on her laptop.Or the Big Bang Theory,that show with Sheldon the cute brainbox About as good it gets,TV-wise,these days. I loved Frasier,but we could buy the series on dvd if i Really NEEDED to see it again. But we were paying like 700 ZAR for something only my daughter watched only now+then,so the hubby bought her a laptop and said download what you want.

Here's a better use for a TV set:

Things usually start small..so as not to spook the herd.

"Woke up one day" is commonly used to indicate an arbitrary or whimsical decision, with little to no forethought and that is clearly the intention in the op.

Since everyone wakes up and starts new ideas or plans while awake, your literal interpretation of that phrase would apply to absolutely everyobody who ever started a plan.

Idiocracy happened when a junior senator from Chicago who used to be a community organizer became president.

lol, YES, I mean it as a "whimsical decision"

We are being separated and disadvantaged as the years progress, we've allowed the dumbing down of our youth. But, only in certain quarters.

I would suggest you are part of the idiocrocy by bringing this ridiculous claim to ATS.

posted on Mar, 4 2016 @ 04:10 PM
link
this a good little video that shows we are actually very close to that movie already

posted on Mar, 5 2016 @ 06:42 AM
link
I finally got to watch the movie Idiocracy a while back. It was a typical comedy with middle school humor, but I have to admit that at the beginning, where they showed how people became stupid, was a theory of mine already. Quite funny how they portrayed that one.

The people with greater intellect will tend to over plan and over react to their personal situation and chose careers over breeding or perhaps they will adopt or only have a single child. Where as the less intelligent and under educated will tend to be more aggressive, have bigger nuclear and extended families and will out breed the smarter ones.

Also, the idea of a future using a broken English language based on popular slang was one idea I pondered on before. However, the idea of the idiots gaining positions of power in the government seems unlikely, unless the power had completely shifted over to the shadow government making the official government offices impotent. Undoubtedly, a small minority of intelligent people would still exist in power over the idiot masses.

Plus I'd imagine that the basic infrastructure would be intact due to the availability of robots or a large pool of unskilled labor.

Overall it wasn't a serious dystopian plot but a situation comedy loosely based on one. Still worth watching at least once to know what people are talking about.