Now an alien hunter claims to have found MH370: Conspiracy theorist believes he has spotted missing

A UFO hunter claims to have found the missing MH370 plane in an eight-month-old Google satellite image.
Scott Waring believes an outline of a Boeing 777 can be seen beneath the water off the coast of Cape Town in South Africa.
He makes the claim almost two years since Malaysian Airlines flight MH370 disappeared killing 239 people on board.


Now an alien hunter claims to have found MH370: Conspiracy theorist believes he has spotted missing plane near Cape of Good Hope ‘while looking for an old UFO’

A You Tuber has found what he thinks is the wreckage of an airliner floating in shallow water off the Cape of Good Hope. The image he saw was on Google Earth from 7/26/2015. The video maker demonstrates how to find the correct photo with the aircraft image in it.

Interesting,im South African.Tried to s+f to thread but it won't do so from my cell,will give ya when im by my pc later.Then i can watch the vid too.That would put the doomed flight half a world off its flightplan though,not so?

Did you watch the video? He does address that to some degree, although he acknowledges measurement issues.

posted on Mar, 4 2016 @ 09:43 AM
link
I'd be shocked if it was even close to that intact with a flaperon and horizontal stabilizer being found.

Yes, the plane would be a long way from home but the video presenter thinks that it was capable of a long flight. He thinks it crashed somewhere off the coast of Africa.

I agree. The video presenter thinks the nose of the aircraft is missing. One would think that would send it to the bottom, but for it to still be floating, air must be trapped in it.

posted on Mar, 4 2016 @ 09:49 AM
link
The Youtuber in question posted a video the other day claiming that a man-made structure was actually a UFO parked in one area for many years.

After the media and people on his page made it clear that his UFO was actually man-made, he promptly removed the ability to comment on his particular video featuring the above.

I would take anything this guy says with a grain of salt.

posted on Mar, 4 2016 @ 09:50 AM
link
seen as somebody believed to have found some debris in mozambique, guessing south africa isn't the worst.
however, it isnt anywhere near its flightpath so its high unlikely.

It wouldn't be capable of the full range. They don't load up with a full load of fuel. The 777-20pER has a range of 7200 miles, but the flight that day was only 2700 miles. Because of weight restrictions they wouldn't have a full fuel load, even if they didn't refuel in China.

Fascinating.At least now the s+f is working.My son+friend is using the pc's now but i'll for sure watch the vid later.

You have a point, but in fairness Mr. Waring himself says the chances of this being MH370 are very small. He is simply pointing to what I think is a very interesting image, that should be looked into.

We have to remember that the people who looked in all the likely places were astonished that they hadn't found it, and then wreckage turned up off Africa.

I don't see any possible way that it would still be floating. The pressure hull isn't water tight. There are access panels and portions of skin that would be severely damaged in a water landing. Did you ever see the bottom of the Hudson River aircraft? That was a soft landing and it suffered major damage.

The plane may have gone down in the ocean east of Madagascar, and drifted. 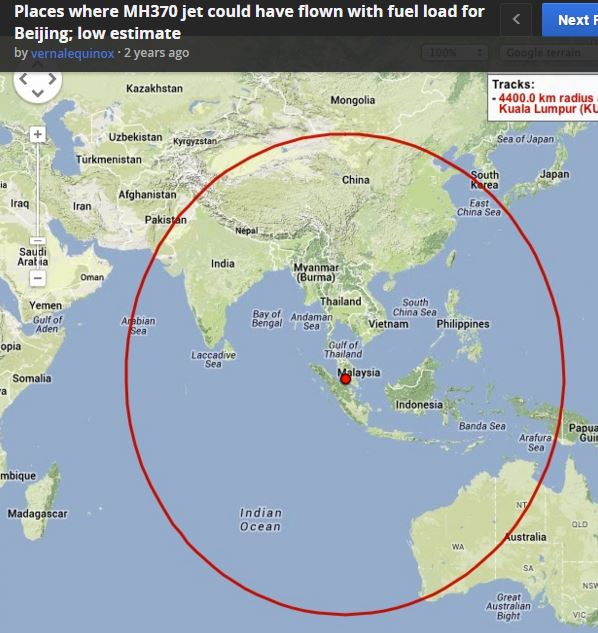 You're probably right, but the image is very intriguing. Worth a look. Maybe South Africa coast guard aircraft will take a peek.

It's possible, but it should be on the bottom not floating around mostly intact.

posted on Mar, 4 2016 @ 10:07 AM
link
a reply to: ipsedixit
Surf/Waves would have ripped it to pieces, also pretty likely there would be eye witness's.

Just as an oddball idea, suppose that the inflatable escape slides on the aircraft were somehow deployed inside the fuselage.

I don't know if that is even possible. Maybe it is.

It is, but they wouldn't provide enough buoyancy compared to the weight of the aircraft, and incoming water, and they deflate over time.

I'm off to the pub. Back later.