SALT LAKE CITY (AP) — In an extraordinary display of Republican chaos, the party's most recent presidential nominees, Mitt Romney and John McCain, lambasted current front-runner Donald Trump on Thursday, calling him unfit for office and a danger for the nation and the GOP.

"His is not the temperament of a stable, thoughtful leader," Romney declared. He called Trump "a phony" who is "playing the American public for suckers," a man whose "imagination must not be married to real power."

The vicious feud marked a near-unprecedented scenario pitting the Republican Party's most prominent leaders, past and present, against each other as Democrats begin to unite around Hillary Clinton.
Romney, McCain: Trump a danger for America's future


Possibly most ominous of all...

That's a little ambiguous. But, coming from someone like George H.W. Bush, I would be concerned about it if I were Trump.

At least politics are entertaining in a substantial way for once. Just as long as nobody gets killed.

Here's a related conspiracy theory that may be playing out right in front of us:

The Secret Plan To Nominate Mitt Romney From The Convention Floor

National Review: The Republican Nomination Will Be Decided at the Convention
edit on 4-3-2016 by Profusion because: (no reason given)

posted on Mar, 4 2016 @ 12:13 AM
link
What Romney and McCain think is VERY important to most Americans. With every thing we do, we ask ourselves, "Would Mitten and Johnny approve of this???"

I have just witnessed Romney do the biggest flip flopping i have ever seen on Trump.
The man has no Honour and zero integrity, he has gone from boot licking endorsement of Trump to an about 180 degree turn in an unabashed shameless display of political chess.

It shows how the establishment is clutching at straws,from asking him about 20 times why he won't disavow David Duke when he clearly has done countless times to a failed candidate nobody throwing in his hypocritical establishment fed view point.
And as for McCain he's a war mongering sniveling little toad whose anti Trump views will only lead to trump gaining more credibility in the long run.

What they really meant to say is Trump is unfit to be the Presidential puppet of the Globalist New World tyranny that they wish to continually perpetuate at the spiritual, social and economic cost of the everyday American.

originally posted by: TerryMcGuire
a reply to: Profusion

Just sayin', when the world's most senile POW, an extremely liberal east coast "Republican," and the godfather of the modern 1984-esque inward focusing US intelligence community all come out against a Conservative candidate, shouldn't that speak volume to those of us paying attention? The message is clear: Trump has ideas that will obstruct most of the things Conservatives hate about the modern GOP.

posted on Mar, 4 2016 @ 01:12 AM
link
Support of Trump is oddly like the "grassroots" support for BHO. imo, this is what America wants, in my best Ross Perot voice; a "firecracker" or whatever McCain said a "" damn I can't remember the term now... going against the grain or whatever.

Easy call that Hillary would annihilate any of the lesser Republican candidates, so maybe Trump is being underrated by his peers. I can't believe this is coming down to an EPIC debate, and I'm not a politico person.

Given this, anyone who can put their foot down between Bush and Clinton and make them knee at the yoke MUST be doing something right. As simple-Simon as he is, ATS might want to give him a serious look as the only *quasi* independent candidate with this degree of success. 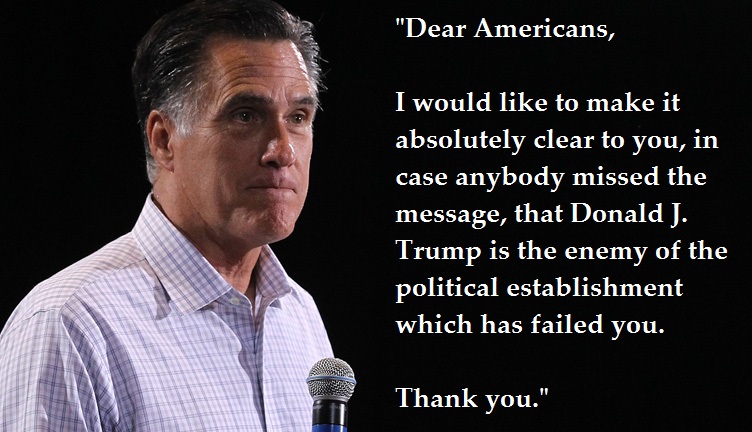 As much as I can't trust or stand Trump, I find it telling how our political system in no way embraces Lincoln's belief of "government for and by the people." We have a conservative party who doesn't like a particular candidate so they're trying to stop him from being nominated. This flies in the face of what our country is all about. Right now, the majority of conservatives want Trump to represent them as a presidential candidate. The final election in November will decide if the people really want this man to become president of the United States.

We have a system of checks and balances in our system of government. If Trump is elected president and is proves to be bad and dangerous for the U.S., or if he starts to over-step his authority, I'm sure congress wouldn't hesitate to immediately impeach him. The media is responsible for showing the inconsistency and lies of all candidates. Let the people weigh the facts and decide who they want to represent them.

This election clearly shows why the "party system" should be eliminated because it clearly doesn't allow the "will of the people" to decide who they want to represent them.

posted on Mar, 4 2016 @ 06:35 AM
link
If Romney and McCain are saying trump is a threat to the American future, it's only a threat to their future not everybody else's

Not important to me.

I couldn't care less what Romney and McCain have to say.

They had their shots, and lost.

The only thing they look like is sore losers.

posted on Mar, 4 2016 @ 09:02 AM
link
The political leadership of all parties needs to recognize that this is the majority of the citizens invoking total SCORCHED EARTH upon them.

They don't care who wins as long as the current leadership are all politically executed.

They don't care what's going to happen when the smoke clears and the ashes settle as long as the current leadership of all parties are politically executed.

What the executioner believes or puts in replacement is of no concern at this time. He then screws up, he's next with his head on the block.


Romneys a snake that makes The Donald look like a philanthropist.
I wonder about Mcain. I believe he's a good man although scarred deeply from his brutal confinement In NV. But surely he must know how it works. They used him and his forced running mate to ensure that globalist stooge Obama would be elected. While Americans were suffering from $4-5 gasoline and home heating oil prices, Mcain's platform became "Drill baby Drill". Within 5 minutes the globalist's pulled the plug on oil and before Election Day gasoline was $1.69 at the pump. Which, of course, went right back to $4-5 right after election. He has to know that was no coincidence.

So, let me get this straight. Two fantastically wealthy, inhuman, compassion deficient lumps of monstrous dung, lambast a fantastically wealthy, inhuman, compassion deficient lump of monstrous dung, citing the reasons that also forbid either one of them from holding the office that the target of their aggression seeks.

Well... That pretty much redefines the idea that the kettle may make an ill advised statement against the pot.

posted on Mar, 4 2016 @ 09:29 AM
link
a reply to: Profusion
Trump is Exactly what the Republican Party has become, with the help of the hyperbolic Fox News.

originally posted by: neo96
a reply to: ugmold


What don't you understand?