Republicans had their chance in 2012 to vote for Ron Paul as their anti establishment guy but they didnt.

That's damn funny, because as I recall when they DID vote for him the RNC thought it would be a great time to change some rules along with plenty of other highly unethical tactics. Paul let them do it without putting up much of a fight.

Many voters know Trump isn't going to lay down like Paul did, so it's just another reason he's appealing to voters. I don't want Socialism, I sure as hell don't want someone who's irresponsible enough to think that "Highly Classified" information is appropriate to send unsecured around the web. (This is just one issue of many swirling around Billary.) Sorry but that is a huge critical thinking error that should really be taken into account.

That leaves Trump. Easily the best choice of the three EVEN WITH all his baggage and shortcomings.

ETA: Since your thread has the feel of a one sided viewpoint you may want to take a look at this: Agent Provocateur

But the BLM movement could never stoop to such low standards...
edit on 3-3-2016 by Nucleardoom because: (no reason given)


This makes absolutely no sense whatsofreakin ever. So your going to ignore what you saw in the video? No its not trumps fault. Its nobodys fault but the racist a$$holes in the crowd. Would you see that at another candidates rally?

posted on Mar, 3 2016 @ 03:16 AM
link
i expected for people to post, maybe they shouldn't have been treating anyone like that. you dont know if that woman is disabled, handicapped or whatever. id never just start pushing someone like that for any reason. if someone pushed me like that, they'd better knock me out because there'd be consequences. theres certain things you dont do to another person ever, and that is assault them like they did to her. if it was a trump supporter in a Sanders rally, i very much doubt things would have played out the same.

originally posted by: Vector99
a reply to: muse7


Why do you think it happened? (And admittedly none of us have the full story only the result).
edit on 3-3-2016 by Jason88 because: (no reason given)

To me that's the crux of it... 'hoping this would happen'. Logic says then that at a Trump rally one is more likely to experience violence more so than at any other candidate's rally. Regardless of her motivations she believed - rightly - she could cause this outcome. Doesn't that worry Trump supporters? That violence is easily triggered at a presidential candidate event. (I'm no peace lover, but this is stupidity).
edit on 3-3-2016 by Jason88 because: (no reason given)

What happened prior to that? Wouldn't you like to make an informed judgement of the situation?

Would you feel the same if she was there yelling kill whitey?


Logic says then that at a Trump rally one is more likely to experience violence more do than at any other candidates rally.

Attackers? Victim? She was smiling and taking selfies the whole time. After getting thrown out, she said it was because she was black. She got exactly what she wanted, just like the other protesters—to disrupt a Trump rally and make as big a show of it as possible, so folks like yourself can use it for race-baiting and political purpose.

No; she is not a victim. She waisted everyone's time, she disrupted the rally, disrespecting the speaker and everyone there, and got treated in kind.

So because she was being disruptive and smiling out of some sense of defiance or more likely because of her satisfaction at having exposed on camera, these moronic assholes' willingness to assault her — she's not being assaulted?

You appear to be arguing that her mere presence was incitement and that it somehow stripped her attackers of moral agency, thereby absolving them of responsibility for their actions.

"so folks like yourself can use it for race-baiting and political purpose."

How better to follow up an asinine argument than with a personal attack? To answer in kind — blah blah blah and you're a fraud who pretends to have deeply held liberal convictions.

Logic says then that at a Trump rally one is more likely to experience violence more do than at any other candidates rally.

As surely as the sun rises this tactic of protesting will be employed much more often to test the results for violence and Trump's response to it. I'd wager it becomes logic as these techniques increase.

From one ATS'er to another, I got no horse in this race, I only know what I don't like, my candidate doesn't exist. But you're possibly right as well.
edit on 3-3-2016 by Jason88 because: (no reason given)

posted on Mar, 3 2016 @ 04:03 AM
link
This is not a Presidential election, it's a IQ test for America and sadly they are failing the test miserably. Never seen a bigger collection of numbnuts in the same room in all my life.

I'm pretty much the same, I just like to follow the motto of the site. deny ignorance. We have 1/2 a story, yet people here run with it like gospel.

It's NOT common for these things to happen at rallies UNLESS you provoke the situation.

NO-ONE is reporting the WHY this happened. Till then I'll stick to the opinion it was probably deserved. Sho me otherwise I'll change my tune.

You must have missed the last 4 elections then.

posted on Mar, 3 2016 @ 04:52 AM
link
It sounds more like a setup, by your unfriendly neighborhood competitor such as Rubio Cruz or their cronies. Sorry it's obvious this is politics, dirty play always applies, you just have to have a eye for it.

anyways, things like this happen during election time, it's a given. The more the opposition can deflect from what's going on in the 'NOW', the more attention they receive, like the Kartrashian Series on TV. They don't call it PROGRAMMING for nothing do they? 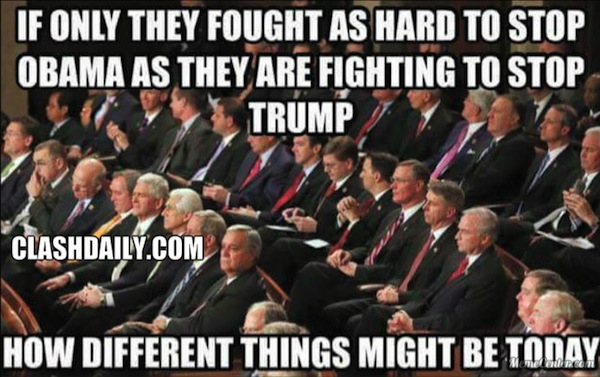 So let me see if I got this straight.

Trump is running for president, but he has to alienate every voter you decide you don't like?

Stfu, that is dumb.

It is a popularity contest, racists get to vote just like the idiots that want open borders.

Well excuse me for not liking the KKK and white supremacists!

But the fact that a politician is empowering these People and encouraging them to act like this, by not calling them out is scary and tells a lot about the current state of the Republican party