This thread is for all those that took part in the thread about the beheaded child in Russia.

originally posted by: skyblueworld
I completely disagree with this thread, she should go through what that child went through, she should be beheaded and paraded around just like that child was. Simple as that.

A normal person would feel rage and possibly even fantasize about doing the woman great violence, but not actually do it or call for it. The only answer is for the woman to be dealt with by authorities. I can't understand how someone can think that way, it brings one to the level of the psychotic woman. Whether just psychotic or psychotic due to years of programming through propaganda, there is only one answer.

Your answer will lead us to televised executions and government sanctioned mob justice.

Because "authorities" have done such a wonderful job on keeping this world safe for our children..

originally posted by: Tulpa
a reply to: skyblueworld

I'm not sure that this was presented to try and garner sympathy for the perpetrator.

That was merely the context in which to demonstrate the reaction to the event.

No one is applauding her. But we don't all have to join in and state the obvious (that we disapprove) and join a gang of snarling wolves trying to out do each other with revenge fantasy fiction.

Particularly from the media.


Yes!!!
So many have missed the whole point.

originally posted by: gosseyn
But this experimentation shows (if I understood well) that there is some sort of feedback between the muscles of the face and the neurons.

I am not a word smith and often struggle to get the info out in a way that others can understand, but yes, that is exactly what is happening.
There's more in the docu to back this up, I'm going to see if I can find a link for it, if I can I'll post it in another thread for those who have an interest.

originally posted by: intrptr
Whomever made those 'witch burning' comments in that other thread are giggling. It best to let it just roll off you like water off a ducks back. The more upset you are by their trolling the more they like it.

Its not so much their comments that winds me up, its the fact that they are being used. If just one of them has caught on then it was worth it.

originally posted by: SlapMonkey
Really interesting post--I love learning about how the brain works, so thanks for posting this. 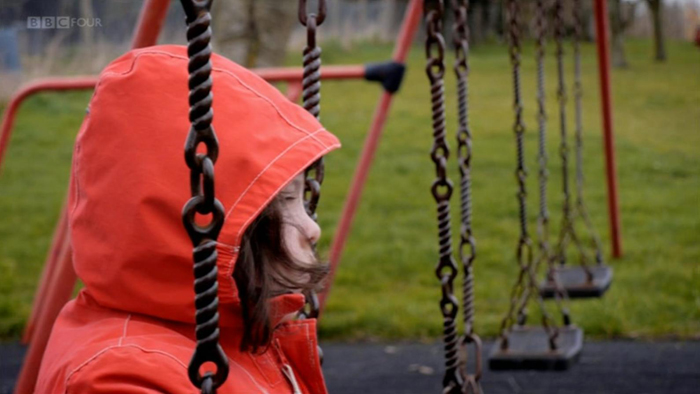 How are your empathy levels when you take a good look at this poor child? Put yourself in her place!

In this instance, I think emotional reaction depends on subjective interpretation of what we're looking at. You talk about revealing how we're being manipulated, and in the instance in the photo above, you posted it immediately after talking about being excluded from social groups. In doing so, you manipulated the reader into assuming that this little girl has been excluded from playing with others, and therefore deserve our empathy-driven pity.

But I see it another way--I see her as being the lucky child whose parents were willing to take her to the park on a cold day when all other parents kept their children at home.

I refuse to let you manipulate me!


Its clear this thread didn't need to be aimed at you

As for the little girl - I don't see any parents present, but I do very much agree with the point you make.

originally posted by: woodwardjnr
Nice thread void hawk. The dehumanisation process has been used again and again as a strategy to help killing other human beings to make the process easier. It's used by militaries in wars and governments who want to get rid of enemies.its why I don't like immigrants and refugees being described as rats or animals or when Cameron used the swarm word. Humans are not normally described as a swarm. It's a word used for things like insects or locust. Not human beings. It suggests we are better than the immigrants superior in some way, when nearly all of us are the descendants of immigrants somewhere along the line. Semantics and words are powerful and it's clear from the immigration debates, dehumanising language is becoming more acceptable, which is a dangerous president that many fail to realise

Yes! its everywhere, and its not just about immigration.
Just take a browse through the TV listings and you'll see titles such as "Benefit scroungers" - "The great british benefit handout" - "Single mums on benefit" etc etc etc...
With an onslaught of such programs that keep the nation hating those on benefits; Cameron and his buddies have been able to cut benefits to those that need them so severely that since 2014 thousands of disabled have been driven to suicide, more than 100,000 have died from the cold because they cant afford to keep their homes warm......but that for another thread.

originally posted by: NateTheAnimator
S&F for the psychology/neuroscience lesson!
Though I'm sure much of the information in your posts will be ignored unfortunately.

but some neurons deep in our brain can’t tell the difference!

I believe your referring to mirror neurons here,no?


No, the neurons in the pain/emotion matrix. Its those neurons that cause us to weep in sad movies, to flinch when we see something violent, because those neurons do not realise its not real.

OP this makes so much sense on ,my practical experience .I see a kid fall hard ., I get a pain shoot through my body .Its instantaneous .

I know that feeling to well. sometimes when I see a person fall it feels like ice cold water has instantly shot through my veins. Its quite odd really, because if they were to fall and land hard on their elbows for example, I'd feel that ice cold feeling rush down my arms, and yes its instant and almost painful.

posted on Mar, 5 2016 @ 03:29 AM
link
a reply to: VoidHawk
Well - It looks like your theories, and the excuse provided by the Russian government - are all wrong:

originally posted by: CharlieSpeirs
You can allude to group think and propaganda...
And it's an amazing thread...

But the bottom line is a lot of people want it (Bosnia) to happen again.

They're itching for confrontation with the "Muslim hordes".

If it's apparent on ATS, a bastion for intelligence online, just imagine what you're missing among the, ahem, far right websites/allegiances and "group thinkers".

I've seen it, and I've been prepared for a while.

Here is an example as subtle as the facial twitches in your post.

originally posted by: jimbo999
a reply to: VoidHawk
Well - It looks like your theories, and the excuse provided by the Russian government - are all wrong:

originally posted by: VoidHawk
As for the little girl - I don't see any parents present, but I do very much agree with the point you make.

Well, someone took the picture, didn't they?