page: 1
95
<<   2  3  4 >>
log in
join
share:
SkepticOverlord
+57 more
posted on Mar, 1 2016 @ 02:04 PM
link
One thing I dislike more than Donald Trump is voting fraud, and there are dozens of reports of some serious issues in Texas, a Rubio "MUST WIN" state. Twitter is seeing lots of activity, under the search for "voting fraud," about votes being switched from Trump to Rubio on the electronic voting machines. 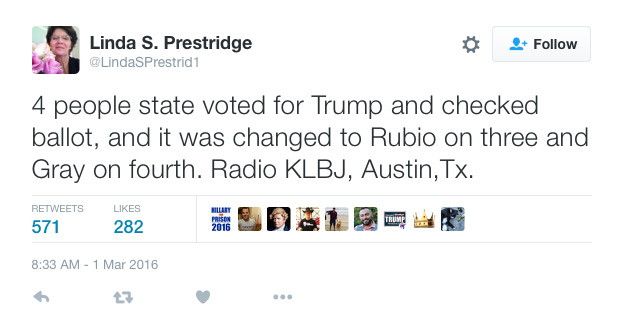 What's even more curious is some apparent Twitter suppression of this. Just one hour ago, the hashtag #votingfraud had hundreds of tweets today, with several new tweets every few minutes. Now, it only has five for the day. 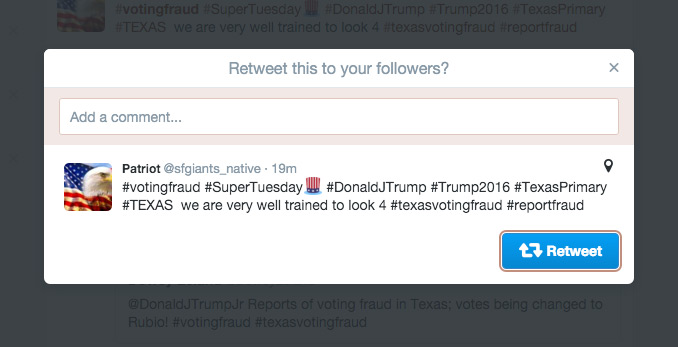 It didn't appear in our timeline.

But less than a minute later, I retweeted this, that didn't have the hash tag. 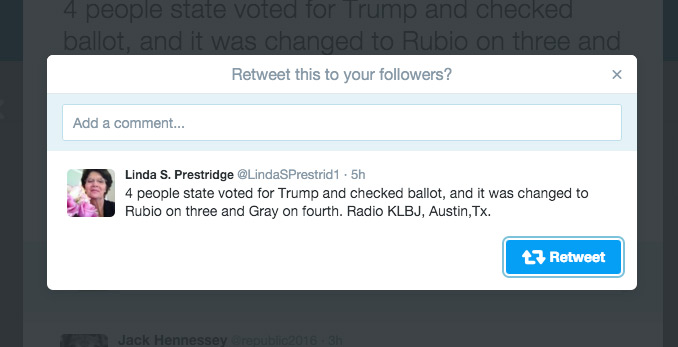 It showed up in our timeline just fine: 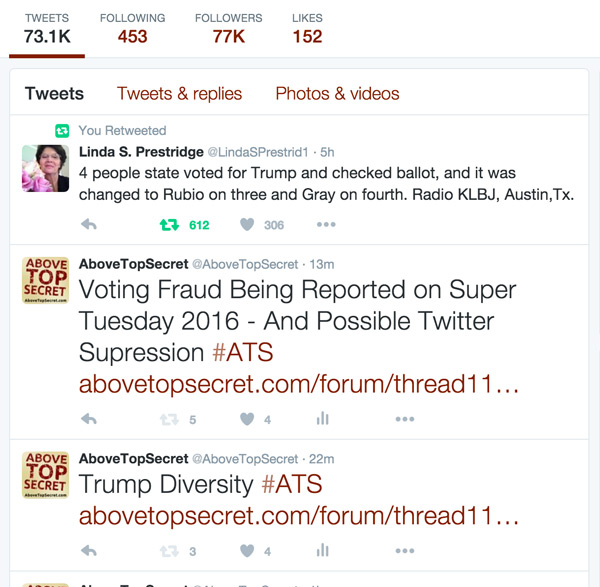 It will interesting to see how Trump does today.

Perhaps a "test" area for the main election in November?

Twitter for months now have been shadow banning people left and right, and they instituted the "trust and safety council" a week or two ago along with changed their algorithm to bury and/or hide "low quality tweets".

This is one of the biggest information suppression conspiracy realities going on and its barely being discussed outside of right wing fringe places like breitbart and crap.

Raise a concern and people simply say..dont use twitter...
not realizing how impactful this is going to be. twitter can, and has, flipped nations.

Every trick in the books going to be played to get a establishment candidate on the throne.

Hell I think Trump is part of the con.

DBCowboy
+6 more
posted on Mar, 1 2016 @ 02:19 PM
link
well, if the establishment can't get the sheep to obey, then they'll just game the system so their boy wins regardless.


Easier to blame the "Glitch" on a programming error! I recall things like this happening in past elections with touch screens.


What was it blamed on then? Calibrations were off in some of the machines. How convenient it is coming up again in this fraudulent election.

I would not vote for Bernie Sanders but it became very transparent early on in this "Selection" process that Hillary was already chosen, by the disorganization/fraud in Nevada.

When those in power are so blatantly obvious in showing their corruption towards the people who vote for their so called Government Leaders, it should be enough to bypass ALL BARRIERS regardless whether you support that ideology or candidate!

It is a direct assault on everyone who participates in the corrupt system and also validation for those who choose NOT to participate in the fraud.

Best we can hope for is we finally realize it isn't about racism, religion, sexuality nor any other type of division we are bombarded with by a desperate regime becoming so obvious by openly mocking the system they pretend to hold sacred?


I confirmed the suppression, and revised the opening post.

So....someone needs to create TEETER or something that is a clone of Twitter that does pretty much the same thing. Maybe have it coded and produced in China so copyright/patent/trademarks can be skirted. Have it owned by the people who buy the app. They all get a say in how the development goes, things go up to a vote of the user base. A democratic social media system, paid for and owned by the users.

They say it was changed, do they have the documentation for that or is it just hearsay?

Every election, there's a smattering of reports of misrecorded votes that are presumed to be part of some grand conspiracy to rig elections.

In all the cases I've read about, it sounds like a calibration error — "I clicked *this guy* but it recorded *the other guy*!" — which in my many years of experience with resistive touch screens in industrial applications (mostly in the form of Symbol/Motorola/Zebra & Datalogic handheld data terminals) is a common occurrence.

The other thing that makes me skeptical is that common sense dictates that if somebody where to hack the voting machine's firmware, they'd certainly be smart enough to make the rigging invisible. That is, the voting machine would show the vote the voter intended to cast and record whatever the tamperer wanted.


All a voter needs is a computer, an electronic card reader, their ID card and its PIN, and they can vote from anywhere in the world. Estonian e-votes can only be cast during the days of advance voting. On election day itself people have to go to polling stations and fill in a paper ballot.

It is too easy for a 'hacker' to manipulate votes as they register.To then get the desired outcome.

How seriously are we to take what people on twitter are saying? Isn't that just some anecdotal evidence?

Wonder how many are user error turned into a rant

Interesting but not very scientific.

Why don't you try another tweet with less hashtags and less overlap? It could be that you're tripping some sort automated spam filter. 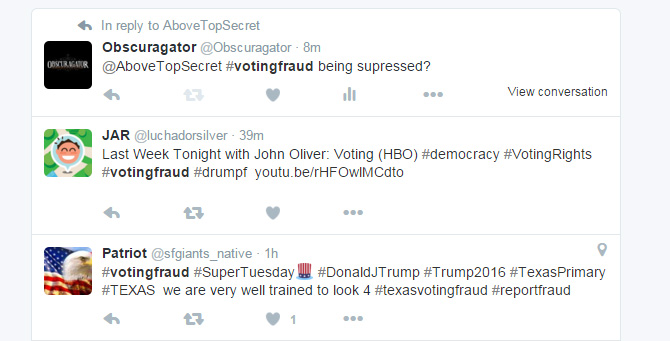 I for one had no problem using the hashtag. Deleted and tried another tweet (with suppressed spelled correctly lol): 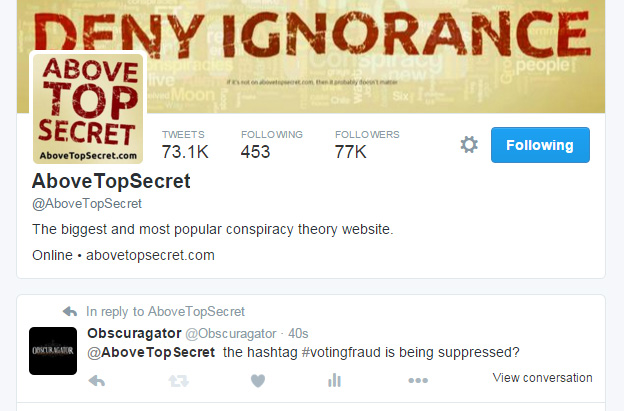 originally posted by: EightTF3
Whole system is bull#. Why people are voting for Trump to begin with

Star for answering your own question!

Trump or Carson are the only 2 non political candidates. If Carson had half a chance I would vote for him, but he doesn't. So I will as usual give my middle finger to the establishment by my protest vote for Trump. He had the balls to not apologize for saying something offensive. In a world where anything you say can offend someone, that is refreshing as hell in by book!

As some people have already touched on, Trump very well could be a plant to shake things up for Hillary, but either way, other than Ben Carson, the Republicans have NOTHING to offer other than more of the same ole players. So rather than volunteering to bend over for another four years, I am going to play hard to get!


How seriously are we to take what people on twitter are saying? Isn't that just some anecdotal evidence?

just how did the tweeter know for sure the 4 votes for Trump were changed?

are not the votes unidentified, secret as-it-were... the 4 votes cast were actually for the candidates named... It is possible that the later 4 votes for Trump were still in the system and not ready for release at the time... dozens of possibilities can be conceived


someone is yelling FIRE in a darkened, fully seated Theatre, imho

originally posted by: manuelram16
So Rafael Edward Cruz is cheating to get the nomination ?, maybe he's learned from the best (HRC)