CO2 burst seems to be from San Andreas

In an effort to locate another source to corroborate the high Carbon Monoxide levels sensed by the GEOS-5 Satellite, I checked the Air Quality Index levels for California. I didn't find anything that really stood out, but something else caught my attention in another part of the country. 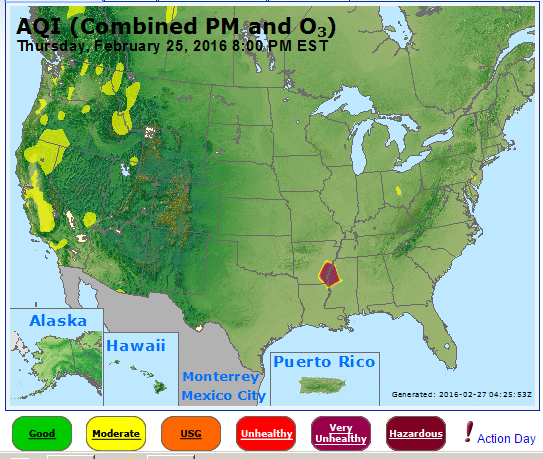 This is a map of the AQI for the US at 8:00PM EST on February 25th, 2015. Notice the purple splotch along the Mississippi River, just North of Louisiana. This represents an extremely high level of Ozone and particulate matter that is essentially off the scale. I checked several days before and after this, but I didn't see anything similar in any other part of the country. Note that this event unfolded over the course of less than 2 hours before it disappeared.

While I know of no direct correlation of the presence of O3 in Arkansas with the other gases sensed in CA, I found the timing interesting.

Some people will also notice that this extreme AQI event is located in the general area of the New Madrid Fault.


originally posted by: ThickAsABrick
In many ways I hope I'm wrong because I have family in the area and do wish the best for all people.

You do know it's inevitable, right?
I mean, there will be an EQ in Cali, and a massive one, and probably in the next ten years.


Yeah, I know, it's difficult because within my family they are the most financially successful ones, but for where they've brought property? They have a "beach house" a bit south of Santa Cruz, built up against a sand Cliff and low enough that winter storms are a flooding concern. I've been there once, it is a nice place. But to me it was quite obvious that this place will end up a pile of rubble. Plus they bought it before 2008 at about $2 million and after 2008 it's worth maybe $1 million but they're still paying that mortgage.

posted on Feb, 29 2016 @ 09:28 PM
link
Is it possible this could be related to the Aliso Canyon natural Gas Leak (methane)? From what I understand, this has been going on for awhile now.

There is no "internal Sun".

Concentric objects are inherently unstable in orbit. A "sun" in the center of a hollow world will not stay put. It will, in short order, drift into the inner wall and bob's your uncle.


It cancels out. The math is a proof you do in maybe second semester calculus based physics.

Also, unless you're invoking some sort of planet-sized monopole, you can't have a sphere with a singular magnetic polarity suspended inside another with the same. They'd torque around until attracting poles "saw" each other, and bang.

Nope, you can't have a stable orbiting sphere-in-sphere. It go boom.
edit on 1-3-2016 by Bedlam because: (no reason given)


Spin it that fast, and it just drifts into the wall anyway.

Hollow Earth has way too many basic flaws. There's a reason no one's taken it seriously since the 19th century.

posted on Mar, 1 2016 @ 08:22 PM
link
Well apparently the CO2 reading was due to an algorithmic error. mobile.twitter.com... Wow. Didn't expect the inner earth bit to pop up in all this.
edit on 1-3-2016 by ThickAsABrick because: Added commentary.

originally posted by: VoidHawk
Who's going to pay the carbon tax?

The Big One goes Morgellons in just a single post, ATS!
I'm doing my best to find a video of a UFO in that CO2 and CO1 spewing area, and one of dark matter, so we can unite the fields in one thread.


I counter that the Earth mantle, suddenly super-hot, is the cause all along the Fault-riddled Terrain of CA/OR/WA
where the sudden out-gassing is taking place
the hotter than usual mantle, the additional hot-spots under this whole west coast expanse is causing the out-gassing and the resulting destabilization of deeper strata layers which CAN lead to a mega EQ

the hot Mantle below the Earth Crust is causing displacement----which causes an outgassing--- with an EQ to follow;;;


Magma could and would be the ONLY possible culprit capable of producing this large of a gas release — the nail in the coffin on the “cause” falls upon the fact that these large releases of gas are centered around volcanoes and man made crust puncture points.

Upwelling pressure from below the Pacific Plate must be placing a large amount of pressure underneath the North American Craton.

The pressure has already displaced multiple dormant volcanoes over the past 1-2 weeks, most of the volcanoes being in California.

perhaps a gathering number of credible voices will get on-board with the Theory I-have-been-pushing for quite awhile here on ATS and among my circle of friends/peers...

the Magma is causing the outgassing which in turn increases the destabilization of the lower strata...resulting in potential EQs....
the prevailing thought is plate movement itself causes outgassing & EQs... in the normal case that's 95 % true... but in this instance it is the overheated Mantle/Magma initiating the problems we will be experiencing soon abd beyond just the West Coast of the USA

the 'internal Sun' is a descriptive Metaphor...not a illogical/fringe idea of a Orb inside a hollow Earth


the 'internal sun' was the 'myth' conveyed to the local, under educated peoples of, say, around 50,000 bce when the last advanced civilization flourished in the Mythic Atlantis... the scholars of that age knew of the cyclic undoing and Chaos the Earth Core would do to the Surface world so they packaged the Meme into the 'internal sun' myth so the indigenous peoples could pass along songs & stories in the oral tradition... concerning their future beyond maybe 500-1,000 generations

This has confused the fracking out of me.

I originally posted this in Quake Watch, and then last night I saw NASA had said it was due to fire's or the particulates in the fires.
gmao.gsfc.nasa.gov...

I posted this article this morning.

St Udio, can you please set me straight on this. I am not a dutchsinse subscriber. And if your "dead on correct" why is USGS and NASA saying something totally different.

Well that's what I also read. I am very confused.

Unless that's what they are trying to do.....

I thought I had posted some credible sources. Here is one of them.


I just wanted to add, that I would NEVER purposely post a link that I thought was BS or fear Mongering.
edit on 2-3-2016 by crappiekat because: to add