I'll give three examples, though, of fatal domestic violence that occurred around me: I went to school with Samantha Jean Russ, only lived a few blocks from her. She was murdered by a close friend of her father's. I went to school with a pair of identical twin sisters, one accidentally shot and killed the other while playing with a hunting rifle. The local guy who cut everyone's lawn in my neighborhood went to prison for manslaughter at a very young age, he shot and killed his best friend during an argument over a girl (he said his friend pulled the gun, they wrestled over it, and it went off accidentally).

These acts of violence all occurred in a small suburban town with a very low crime rate. I can't really think of anyone I knew personally that was shot, or grievously harmed in a random act of violence - but I can recall plenty more acts of domestic and interpersonal violence. Even most shootings in poor neighborhoods are acts of domestic or interpersonal violence - friends/acquaintances feuding, boiling over to violence.

There are random acts of violence, but it is astronomically dwarfed by domestic and interpersonal violence.

I appreciate your facts. But the only thing that ever saved my life, was instinct. I'm going to go with that in this time of hate and violence.

originally posted by: MOMof3
a reply to: Syyth007

Well, no one in my family so far has shot one another.

And i'm sure, up to this point, the same was true of the family in the news article.

Are you a doctor? If you don't like the idea fine. But I am perfectly sane.

But you don't need to be one to know that constant paranoia is not a normal state.

Paranoia gave us the Japanese internment camps of WWII, McCarthyism, and the current fear of Muslims. Not really a positive thing, paranoia...

Your fears are unfounded, because they are exceedingly rare, due to current regulations. Additionally, one has never been used in a school shooting. I find a lot of times that fear is born out of ignorance. There is nothing wrong with being ignorant, it's when someone is WILLFULLY ignorant, that you end up with problems.

Remember: An error doesn't become a mistake, until you refuse to correct it.

You sir, are why God made grandmothers.

I will not continue debate with you and the abuse of calling me paranoid,ignorant.

Which were not produced by an automatic weapon.


You sir, are why God made grandmothers.

I'm not quite sure what you mean by that.

My grandmother was a very wise, very smart woman...brave, strong, kind, and knowledgeable about a great many things.. She was one of the best human beings i ever had the honor of knowing, and the world is a bit dimmer without her in it.


I will not continue debate with you and the abuse of calling me paranoid,ignorant.

I meant no offense. I was only making observations, and stating facts.

No, you are trying to muddy the waters.

Yeah, the results of people withdrawing worries me too. But, better than being an open target.

really, a wiki cause it's fast. if you want you can go and find even more details in a google search.

Murder
Around 49 people are murdered in South Africa each day.[5] The murder rate increased rapidly in the late 1980s and early 1990s.[6] Between 1994 and 2009, the murder rate halved from 67 to 34 murders per 100,000 people.[7] Between 2011 and 2015, it stabilized to around 32 homicides per 100,000 people although the total number of lives lost has increased due to the increase in population.[5] There have been numerous press reports on the manipulation of crime statistics that have highlighted the existence of incentives not to record violent crime.[8] Nonetheless, murder statistics are considered accurate.[9] Homicides per 100,000 from April to March:[10][11]

Footnote 5 is from Sept of last year.

chart is from here, Death Penalty Information Center
i dare say that if SA had the same amount of people, the rate would be at least 6 times higher. i wouldn't feel safe.

so i think that i'll stay in the U.S., and leave you to your chances in the ghettos of south Afrika, (said in my best Afrikaner voice )
the South Afrika that mandela dreamed of, the home of the tire neckless his wife iircc winnie said as she stuck her match.


In 1986 Winnie Mandela, then-wife of the imprisoned Nelson Mandela, stated "With our boxes of matches and our necklaces we shall liberate this country"
Necklacing

posted on Feb, 28 2016 @ 11:49 PM
link
Didn't Washington just pass strict gun control laws and does anyone have any info on when the gun used was purchased?

I think you should take note of this fact graphic I am "retweeting" which I am sure you saw on the last thread which you also had a similar opinion on:

This is the only statistic that matters 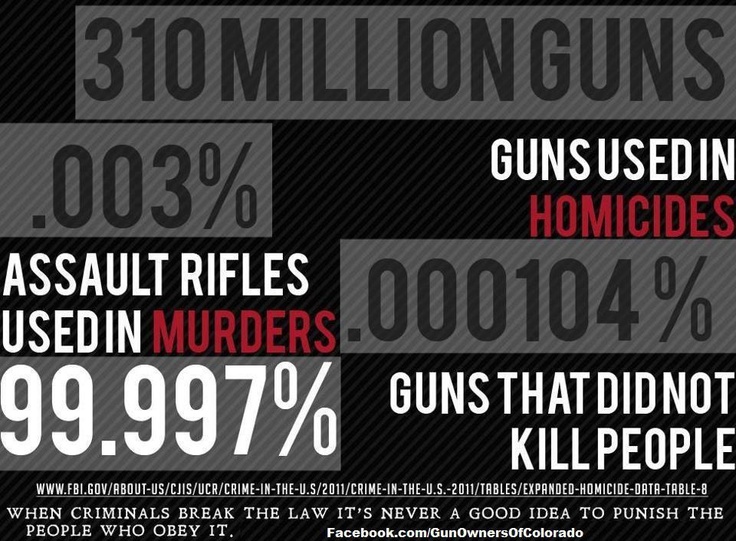 Less than one percent of the population breaks that law that says 'thou shall not kill'.


My elementary age kids go to a school with an armed guard. He used to only carry a taser. After Sandy Hook, and a law passed in Florida, he is now armed with a real pistol. Thank goodness. He is a retired officer, with his own family, and a stand up guy. I thank our legislators for having sense to make it possible.

This domestic incident in the OP was just not preventable by anyone outside that family. There were clearly some issues that were not being dealt with which unfortunately blew up the way it did. What shame. 1.5 million CWP's (Florida Department of Agriculture and Consumer Services Division of Licensing Number of Licensees by Type As of January 31, 2016)

The only rare mass shootings we ever have are typically domestic attacks such as this. A damn shame some families and couple don't seek counseling for their issues and end up taking the kids down with them.
edit on 2/29/2016 by AmericanRealist because: (no reason given)

Let's see if those levels continue the next 10 years. My instincts say they are going to increase. The anger, the tribal divisions, we be the ME developing.

I rest my case. People need to underground. Get our kids out of target practice arena:

So you believe people should go "underground" because of mass shootings, do you also not let your kids ride in a car, swim, and use the stairs because those all have more deaths each year than mass shootings?

Hey, you want to put your kids out there during this time of violence go for it. I am taking the position that we are prey and time to get out of the open.

We are at a time when homicide, gun deaths, and violent crime is way down compared to the 90's/2000-10. If you look at the stats the numbers have consistently been going down. You didn't answer my question though if you are that worried about your kids being killed in a mass shooting do you also not let your kids ride in a car, swim, or use stairs because they have a better chance dying those ways then in a mass shooting? I thought liberals were supposed to be all about the facts and not be paranoid.
edit on 29-2-2016 by nancyliedersdeaddog because: (no reason given)