Is that the case though?

So it seems that the Julian is always ahead of the Gregorian and not behind it.

posted on Feb, 26 2016 @ 01:06 PM
link
Even at the start of the 13 baktun Mayan Long Count calendar, the Julian calendar was ahead of the Gregorian calendar.

No. of days Julian dates are
Years ahead of Gregorian dates.

posted on Feb, 26 2016 @ 01:17 PM
link
a reply to: neutrinostargate
There is a simpler way of working things out.
First, it's recorded in history that when Britain switched from the Julian to the Gregorian calendar, the official date "jumped" by eleven days, leaving out the days in the interval (causing a protest among the uneducated of "give us back our eleven days!").
Similarly the "February" and "October" Russian Revolutions of 1917 are named after the months of the Julian calendar, and actually took place in the following months according to the Gregorian calendar.

P.S. I think you are also missing the point that the Gregorian calendar was intitiated in the sixteenth century by Pope Gregory, and is defined by that operation. There's no point in calculating it back before then.
Since Gregory's time, both calendars have been continuously in use by one society or another, and those societies are witnesses for the difference between the two systems.

posted on Feb, 26 2016 @ 01:38 PM
link
My calculations show this that the Julian calendar has a leap year at the end of a century and the Gregorian doesn't.

I have also clearly shown that the Julian calendar always drifts further away from the Gregorian, not gradually falling behind.


In the Julian calendar, named after Julius Caesar, every fourth year had 366 days rather than 365. Roman astronomers calculated that a year — the time it takes the Earth to revolve around the sun —had a duration of 365.25 days. This method of adding a “leap day” every fourth year averaged out to this determined value. Except, a year’s length isn’t 365.25 days; it’s actually a bit shorter. This only became noticeable as the centuries passed and the calendar drifted out of sync with the seasons.

By the 16th century A.D., people noticed that the first day of spring had drifted 10 days ahead of the intended 20th of March. Basically, history had used a leap-day year 10 more times than was useful. Recognizing the 10-day error, Pope Gregory XIII had a scholar (Aloysius Liliusa) devise a new system that would keep the calendar in sync with the seasons. This new system changed which years should be considered leap years based on what numbers divide the years evenly.

www.livescience.com...
edit on 26-2-2016 by neutrinostargate because: (no reason given)

originally posted by: neutrinostargate
No. of days Julian dates are
Years ahead of Gregorian dates.


Right, I think I can pin down the problem to the fact that the site quoted is using the word ahead in a confusing way.
It says exactly the same things as everybody else on the difference between the two calendars, but it describes as "being ahead" what everybody else calls "being behind".
edit on 26-2-2016 by DISRAELI because: (no reason given)


originally posted by: neutrinostargate
No. of days Julian dates are
Years ahead of Gregorian dates.


Right, I think I can pin down the problem to the fact that the site quoted is using the word ahead in a confusing way.
It says exactly the same things as everybody else on the difference between the two calendars, but it describes as "being ahead" what everybody else calls "being behind".

Never does the Julian calendar drift behind the Gregorian. The calculations prove otherwise. That is a fact.

If you can show me how the Julian calendar drifts behind the Gregorian and not ahead, please fill me in.

originally posted by: neutrinostargate
Never does the Julian calendar drift behind the Gregorian. The calculations prove otherwise.


Forget the calculations for a moment.
The true witnesses are the societies which have been continuously following the two calendars since the time of Pope Gregory.
One set of societies, including the modern West, have been following the Gregorian calendar. They testify what the Gregorian calendar says.
The other witnesses, now primarily Russia, have been following the Julian calendar.They testify what the Julian calendar says.
If the date given by the first group is X days away from the date given by the second group, that tells us what the difference is.
My other reply explains how it works.
edit on 26-2-2016 by DISRAELI because: (no reason given)

I still don't see your point.

There was a 26 day difference between the gregorian and Julian at the start of the Mayan Long count. Look it up. Sept 6th 3114 bc Julian or August 11th 3114 bc gregorian. The Julian was ahead of the gregorian by 26 days. So are you saying over time, the Julian and the Gregorioan date became the same day and then the Julian date started drifting behind the Gregorian date? It doesn't work out that way.

posted on Feb, 26 2016 @ 02:12 PM
link
a reply to: neutrinostargate
The Gregorian calendar did not exist at the time when the Mayan "long count" began, so that issue is irrelevant.

originally posted by: DISRAELI
a reply to: neutrinostargate
The Gregorian calendar did not exist at the time when the Mayan "long count" began, so that issue is irrelevant.

My calculations are on point and correct and includes everything you just said above. So I don't get your point. Did I not show you there is 9 or rounded up 10 day difference from the Julian to gregorian on 1582. The Julian was 10 days ahead of the gregorian. Your agruement somehow says that the Gregorian calendar would be 10 days ahead of the Julian calendar? Um no
edit on 26-2-2016 by neutrinostargate because: (no reason given)


It was Pope Gregory's decision to add ten days to the Julian calendar to establish the Gregorian.
Most people refer to this as the Gregorian calendar being ahead of the Julian.
As I pointed out in an earlier post, one of your sites is confusing the issue by using the word "ahead" the wrong way round, when describing exactly the same thing.

The Gregorian calendar, ever since its inception by Pope Gregory, has always been AHEAD of the Julian calendar, in the sense that days have to be ADDED to the Julian date to arrive at the correct Gregorian date.
Check any history book for the period when both systems are in operation.
edit on 26-2-2016 by DISRAELI because: (no reason given)

posted on Feb, 26 2016 @ 02:40 PM
link
The mistake is you don't freaking add the days, you subtract them. At that time , the Julian was ahead of the Gregorian calendar. So subtract day 10 days from the Julian to get to the Gregorian. Simple as that but apparently they goofed.

posted on Feb, 26 2016 @ 02:49 PM
link
a reply to: neutrinostargate
No, what Pope Gregory did was to ADD days, in the sense of increasing the day-number attached to a particular date. He decided that the day following January 1st (or whichever day he chose) should be called January 12th instead of January 2nd.
Over the few centuries which have passed since then , the number which needs to be added has gradually got larger, and is now 13 instead of 10.
The only people who goofed are the second site you quoted; as I now point out for the third time, they confusingly used the phrase "Julian calendar ahead of Gregorian" when what they were describing was the other way round.
All this head-scratching is arising out of that badly-chosen wording.
(This is what happens when people get their information from websites instead of from real books)

The Julian and gregorian calendars use a different amount of days a year so obviously one would read a later number than the other.

Then take out the number 5.

As you can see its one less.

Not exactly some major breakthrough.

posted on Feb, 26 2016 @ 04:06 PM
link
Also, the Russian Orthodox use the Julian calendar. They hated the Gregorian and didn't adopt it. To this day they still use it.

They celebrate Christmas on January 7th (Julian date), because 13 days before Christmas in the Gregorian calendar.

www.slate.com...
Since Russian Orthodox observe the Julian calendar and rejected the Gregorian, they celebrate Christmas on January 7th (Julian) or Dec. 25th (Gregorian).

If the Russian Orthodox weren't observing the Gregorian calendar, it wouldn't make sense to observe Christmas on January 7th Gregorian, or the Julian date of Dec. 25th.
edit on 26-2-2016 by neutrinostargate because: (no reason given)

"While Christmas trees and decorations have been taken down in many countries, celebrations are just beginning in others. In Russia, Ukraine, Greece, Israel and several other nations, Orthodox Christians, Greek Catholics and Coptic Christians will celebrate Christmas Wednesday 13 days after the well-known Dec. 25 festivities. 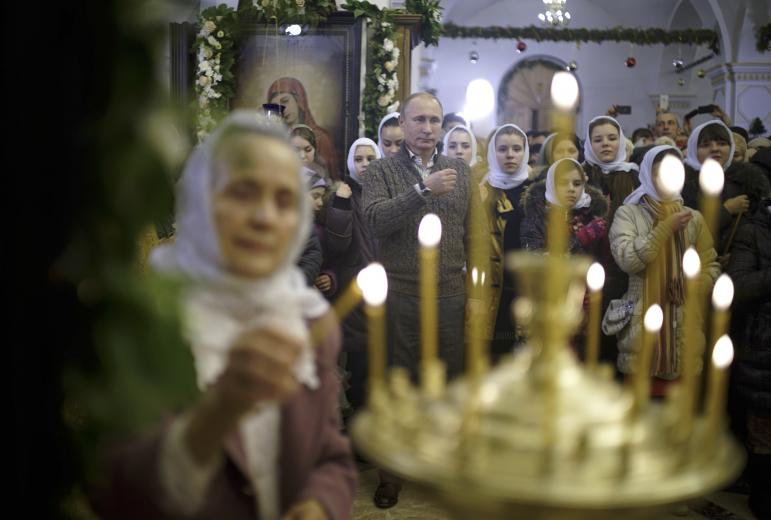 "Russian President Vladimir Putin attends an Orthodox Christmas service at a local cathedral of the village Otradnoye in Voronezh region Jan. 7, 2015. Most Orthodox Christians celebrate Christmas according to the Julian calendar on Jan. 7, two weeks after most western Christian churches that abide by the Gregorian calendar. Photo: Reuters/Alexei Druzhinin/RIA Novosti/Kremlin "

originally posted by: neutrinostargate
First lets go back to this article.


Their basic statement is the same as mine. That is, Pope Gregory in 1582 decided it was necessary to make the calendar "jump" ten days, so that the spring-equinox would re-gain the date which Julius originally assigned to it.

I've already explained how the difference arose and continually increases, so all I can do now is repeat the explanation;

All your calculations about what the Julian calendar date ought to be are invalidated by this one simple fact; the Orthodox churches have been following the Julian calendar continuously, and they know what the current Julian date is. They will tell you that today's date is February the 13th. Ask your nearest Orthodox priest.

Forget websites and silly calculations, and try to understand for yourself how the system works.
By having more leap years than was necessary, the Julian calendar was moving through the year too slowly, and so its date for the spring equinox was falling behind the date Julius set for it.
Therefore Pope gregory had to speed things up by adding ten or so days to the day-number which the old calendar was using.
Just take your time and think it through.