Donald Trump and Berlusconi: Repeat History in the Making 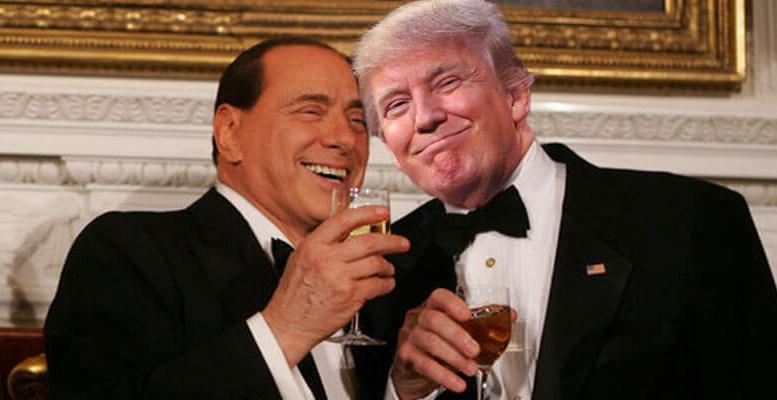 The Donald Trump phenomenon (shall we call it that?) is taking America and the world by storm. Presumed pundits are beginning to take him seriously despite their initial misgivings and continuing bias. Is this really happening? they seem to ask themselves, disconcerted. Could this really be? What is surprising is that, from the height of their alleged competence, they would not be aware of a recent historical precedent, which has occurred in another western democracy: that of Italy’s self-made billionaire and three-time prime minister Silvio Berlusconi. The similarities, if not outright parallels, between Berlusconi and Trump are so many and so apparent, what is currently taking place is more than a déjà vu: it’s history repeating itself.

For those of you who are not familiar with Berlusconi, I shall draw a partial comparison with the enormously wealthy newspaper publisher Charles Foster Kane, the hero in Orson Welles’s film Citizen Kane — hailed by many critics and filmmakers alike as the best movie of all time. The comparison is only partial because, in real life, Kane has been outdone by Berlusconi, a self-made media tycoon who owns the largest broadcasting company as well as the largest publishing company in the country, with their ancillary periodicals and newspapers, plus the financial services firm Mediolanum and, I must admit for my own pleasure, too, A.C. Milan, one of the world’s most successful soccer teams. Indeed, he puts Kane’s material accomplishments to shame. And there’s something else: in the movie, the magnate’s famous dying word is “Rosebud”, inspired by a snow globe he is holding. “Rosebud,” it is revealed, is the trade name of the sled the eight-year-old Kane was playing on the day he was taken from his home in the mountains. There is, in that final scene, all the regret of a lifetime: his fortune has made him become immensely rich but morally bankrupt and corrupt. He dies alone, surrounded by a staggering amount of chattel. “Rosebud” symbolizes the regret for what his life became when he gave up his sled, his family, his values.

But, hey, that’s a cliché—the fully paid-up Berlusconi, now eighty years old, is far more like Scrooge McDuck: the former wallows in his possessions much like the latter takes his signature dives into money. No Rosebud for either in the foreseeable future…

The self-made Berlusconi got his start as a real estate developer and progressively branched out, eventually becoming such a hugely influential media tycoon that he has been constantly flirting with antitrust laws. When he decided to engage in politics, Berlusconi’s great rhetorical ally was the “external enemy”: the specter of communism, which he invoked constantly in his speeches, and which his electoral basis feared as much as he did. The left and the workers’ unions had not realized, or it was in their interest not to realize, that postwar Italy had changed; it had become a more affluent country, with as many small entrepreneurs and shopkeepers as factory workers, if not more. These small entrepreneurs and shopkeepers detested heavy taxation as much as Berlusconi; communism, in their view, meant outright confiscation of everything they had fought so hard to earn.

While Trump’s external enemy can no longer realistically be communism, xenophobia is an excellent stand-in, be it radical Islam, illegal immigrants from Mexico and elsewhere and, in trade, China, Japan and the “bad deals” they force America to accept. Berlusconi originally named his own party “Come on, Italy” (Forza Italia); Trump’s main slogan is “Make America Great Again.” Needless to say, both are populists and, despite both being well educated, they speak in plain terms, a direct and effective language that greatly differs from “political-ese”.

Another common denominator is the implicit and often explicitly stated theme: “I’ve made myself rich, I’ll make this country rich. I am the best dealmaker around, and I know the best businessmen in the country.” Rumormongers said about Berlusconi back in the early 1990s what they say now about Trump: that he has entered the political arena to boost his brand or even to save his companies.

Both are outspoken, liberally dispensing outrageous statements and/or gaffes. Actually, it’s most of the media that, naïvely, interprets them as gaffes: in fact, they are most probably calculated and deliberate, though they are made to appear offhand and spontaneous, and they get a lot of mileage in terms of controversy and, consequentially, publicity.

Both men are perceived as sexist, though they probably think of themselves as gallant. Berlusconi is notorious also for his “bunga-bunga”: sex parties with a variety of young women from all over the world (sometimes very young, but not under the age of consent, which in Italy, as in other European countries, is sixteen). That is parallel that, at present, cannot be drawn with Trump, at least to my knowledge.

Both have a very high opinion of themselves that borders on vainglory; both present themselves as their country’s savior.

posted on Feb, 26 2016 @ 12:49 PM
link
Ugh another disinfo click bait. Is there anything to this piece besides the usual disinfo opinions (like how great satanism is!) ? I didn't see anything to support the "claims" made int he article.

originally posted by: NihilistSanta
Ugh another disinfo click bait. Is there anything to this piece besides the usual disinfo opinions (like how great satanism is!) ? I didn't see anything to support the "claims" made int he article.

It's interesting that they chose to compare Berlusconi to the fictional Kane instead of the actual Hearst.

posted on Feb, 26 2016 @ 12:56 PM
link
Trump is just part of the growing trend of Billionaire Businessmen taking over countries and dumping the middle-man (lobbyists) along the way.

Once they make it in to power, they owe nothing to nobody and they immediately start cracking heads.

Makes sense, I could totally see doing that if I had the money and power. F u I'll just become president, I don't have the time to wait on this bureaucratic traffic jam, I'll do it myself.

I want results now, I'm tired of waiting on these losers!

Well I doubt they want people to understand yellow journalism...

Ummm...I couldn't agree more...this experiment of Skeptics is sure one big let down after another...every one has been nothing but hit piece opinion...No facts...just drivel...

I'm going to have to learn to keep away from this place...it does nothing for me...it offers nothing but leftist partisan hyperbole...

you mean the Hearst family of the Patty Hearst- Symbionese Liberation Army stint?