The endorsement came a day after Mr. Rubio, in a withering debate performance, turned his guns on Mr. Trump for the first time, and followed up this morning, calling Mr. Trump a “con artist.”

Mr. Trump welcomed the endorsement with warm praise for the New Jersey governor.

“He’s been my friend for many years, he’s been a spectacular governor,” said Mr. Trump, standing with Mr. Christie at a press conference in Fort Worth, Texas, for the endorsement.

“I am proud to be here to endorse Donald Trump,” said Mr. Christie, noting they have been friends for a decade.

Mr. Trump “will do exactly what needs to be done to make America a leader around the world again,” said Mr. Christie.

It's genius really. Not only is it a GREAT endorsement but the timing is perfect. No one is going to talk about Trump's lackluster debate performance in Houston - he's forced a news cycle pivot to his own narrative, that he can control.

No way. Too northeast elitist. He has to tap someone from another region or a woman or an African-American as a veep.

The Republicans across the board are going to start coalescing around Trump. Super Tuesday is the last chance to try and stop him and it doesn't look like it's going to happen. If Trump wins the the vast majority, it won't matter if Rubio or Cruz drop out, you're going to start seeing them all coalesce, and the debates are going to be much more of a love fest than you saw last night.

This Christie thing is big. Together they look like no BS.

The left ask for this. They wouldn't stop... 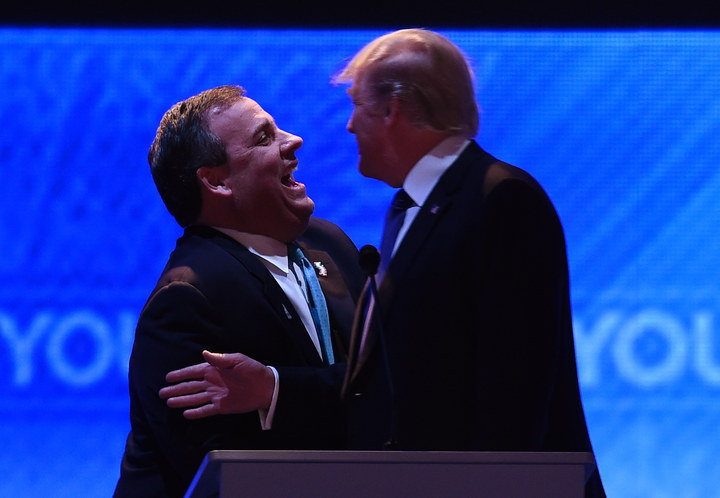 The first question from reporters for Christie was about Marco Rubio calling Trump a “con artist.” Christie said “desperate people do desperate things.”

“Listen, the fact is that desperate people do desperate things,” Christie said. “And I’ve seen it throughout politics and so have you. And so the idea that Marco Rubio can get inside Donald Trump’s head is an interesting proposition, but one that’s really for the D.C. parlor game.”

Trump, responding to a reporter’s question about Rubio’s comment that he may have wet his pants backstage at the debate, said, “I’ll tell you about backstage, I mean, if you like. I walk back there, and he’s with a pile of makeup putting it on his face. I said, ‘Marco, easy with the makeup, you don’t need that much.’”

This is going to be funny.

I don't whether to laugh or cry, it's all just a little too surreal at the moment.

Plus Christie just gave a pretty rousing lead-in to Trump at a rally. The crowd was fired up.

This is going to get off the chain.

It really is theater.

I actually like Christie, way more than Trump, who I will be FORCED to vote for.
edit on 26-2-2016 by BatheInTheFountain because: (no reason given)


He wants to be Trump's vice president. Trump might so Jersey can be in play


The thing is the Jerseyians despise Christie.


He's been a terrible governor

posted on Feb, 26 2016 @ 12:53 PM
link
Folks, this was planned before NH. Christie knew he was going soon. He ATTACKED Rubio who everyone knew was going to take Jebs scepter. This is what friends do. No payback...just an atta-boy.


I think Newt might have said it better.
The GOP should have started thinking about what was blowing in the wind A WHILE AGO.

So your a NeoCon?
People of NJ hate the governor with a passion.

posted on Feb, 26 2016 @ 01:30 PM
link
What a dream team this would be, Trump with Christie as VP? The 2 best candidates joining forces. Or, Christie as Attorney General, at least! He would be the best attorney general we could ever have. And, why not Carson in charge of U.S. Health? Let's do this!