posted on Feb, 26 2016 @ 03:14 AM
link
Recently a dog caused near chaos on a busy Welsh road at three in the morning. Vehicles travelling at high speed swerved to avoid it. Police tried several times to catch it. A policeman was bitten. The decision was made to run it over and kill it. The driver is himself a dog owner and did his best to make it quick. If you look up the story you'll find local, national and international outlets covering it, mostly in an anti-police fashion, calling them cowards and stressing that it was a deliberate act. It was unfortunate, but what would you do, seeing cars and lorries swerving and knowing the dog will bite to avoid capture?

Then search for this story of a successful rescue. Half a dozen local stories. 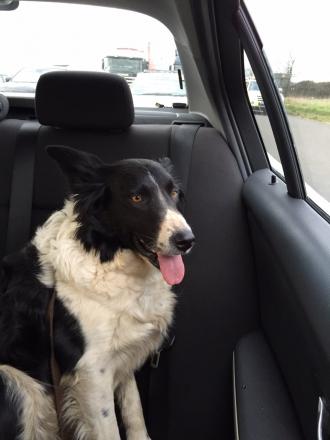 Do they not have animal control?? Odd they would decide to run the dog over at the very least shoot him that would have been more humane. But we have people in tje US who are very good at catching strays and avoid being bitten. Im surprised they dont in the UK.But the other story you posted is nice he looks like he's very happy on the back of the police car and hopefully be reunited with his owners. I bet the dog is wondering why the windows don't roll down though.
edit on 2/26/16 by dragonridr because: (no reason given)

One killed in a collision in Cardiff this morning as well.
www.walesonline.co.uk...

I think the police go out of their way to avoid killing animals. The propensity for US police to shoot dogs has been covered on ATS previously.

It was dark and the traffic was travelling at up to 70 mph then swerving to avoid the dog. It had to be done quickly. Firearms can take a while to arrive here and then pose obvious dangers.

An example of the dangers posed by loose animals on the road.

When the people present can't handle the situation they call the police. Then the police are expected to act with magical efficiency while behaving impeccably. High expectations.

originally posted by: Kester
but what would you do, seeing cars and lorries swerving and knowing the dog will bite to avoid capture?

Tranquilize it... put one of those noose neck control things on it to stop it biting?
You know, just control it and get some people who know what they're doing to catch it.

Close the motorway and armed response team, sorted.
It's an aggressive dog, no tears from me, shoot the thing, I'm sure a round or two from a police firearm is cheaper than the repairs to the police car.

posted on Feb, 26 2016 @ 02:26 PM
link
Police firearms teams would not normally be called for such a problem and the k9 units normally don't have those long range grappling collars as these days its a local council job for lose animals (depending on the person dispatched they may have firearms but i'd imagine getting permission to use them on a motorway would require waking up a lot of people in the supply chain) as some do have firearms for dispatch of animals in distress but do you fancy some guy popping shots down the motorway and possibly hitting cars a good way away as it would depend on the actual location of the problem.


The decision was made to run it over and kill it. The driver is himself a dog owner and did his best to make it quick.

WTF point are you trying to make here? That's messed up if true. I didn't see it in the link.

We just had a Unicorn on the loose in the US. Link

The police statement in full from Chief Inspector Darren Wareing:
Shortly after 3am on Monday 22nd February, several calls were received in the North Wales Police Control Room concerning a dog which was running loose on the A55 at varying locations between the Llanfairfechan roundabout and the Conwy tunnel.

Officers from the Roads Policing Unit attended and attempts were made to try and catch the dog.

Despite several attempts to catch the dog, it continued to run in and out of traffic. At one point an officer tried to take hold of the dog but was then bitten. Further attempts were made to catch the dog, which was by now running in the middle of an unlit carriageway with approaching traffic having to take avoiding action at speeds in excess of 70mph. One car and a HGV had to swerve to avoid the dog whilst the officers remained on foot in the carriageway.

The potential for a serious collision was present throughout . . .

An armed response is going to cost public money, perhaps more than repairs to the car. Possibly the delay would be fatal before traffic was stopped. The collie on the motorway was in a much more convenient location for quickly stopping the traffic, though from the wording of some reports the traffic may still have been clearing the area when the dog was caught.


Cymru gave us the link that shows what could have happened without prompt intervention. "Two dogs on the loose caused a serious accident on one of the main link roads into Cardiff this morning." www.walesonline.co.uk...

"The potential for a serious collision was present throughout, and in the circumstances there was no alternative way that officers could contain the dog and minimise risks to motorists. The only safe option was to run the dog over at sufficient speed to ensure that it was destroyed and would not suffer. Other methods of destruction were considered, but were ruled out on the grounds of public safety.

"Fast roads such as the A55 present inherent risks, and to have vehicles including a HGV having to swerve in the dark was deemed unacceptable as the officers witnessed a number of near misses, and were highly concerned about the potential aftermath of a high speed collision.

"Both officers have their own dogs and did not take this decision lightly. Due to the seriousness of the incident it needed bringing to a conclusion quickly for the safety of all concerned."


Thanks for the Unicorn story. At least that one has a point.

You're helping God save common sense as well as the Queen.

I'm dreading Sir Bernard taking too much interest in this story. I can just see him rubbing his chin thoughtfully and muttering, "We're going to need a bigger eagle". www.abovetopsecret.com...

Oh I didn't think it was police policy to send an armed response team to shoot stray and aggressive dogs on the motorway, I was just suggesting it as an option.
...and they are called dog units in the UK, not that silly contrived cooler sounding 'K9' label US cops use, who the # actually calls dogs canines in normal discussion anyway lol

originally posted by: Kester
a reply to: blupblup


You stated that they closed the motorway and stopped the traffic??

It's two stories of two events. Surely you can read the OP?