Where Does Authority Come From?

Unfortunately, concepts like society, the state, government, or "We the People" are not living, breathing entities, and by ascribing to them a thing that only real objects can possess (in this case, authority), we are committing the reification fallacy:

Ambiguity in this form is a tool, used either by the ignorant doing "good" even if their premise is naive at best, or the manipulative who strive for power over others.

Society can be defined as some arbitrary number of humans, greater than one, living in close proximity to one another. That alone does not lend itself to us to be able to deduce the derivation of authority. To do so, we have to define authority: 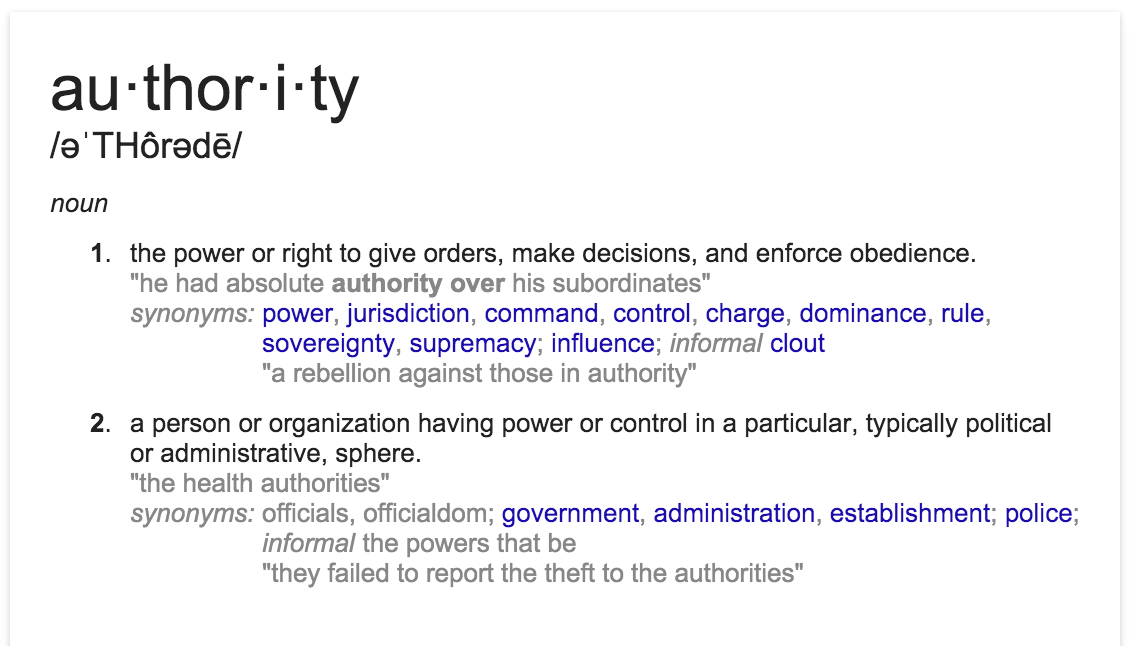 The first part of the definition deals with what authority is: having the absolute sole right to exact obedience from another.

But, how do we gain authority?

For instance, let us imagine that three people--person A, person B, and person C--are living within close proximity of one another.

1. If person A gives his explicit consent to person B, to allow person B to hold authority over him, does person B's authority also extend to person C?

2. If person B and person C began trading goods and services with one another, does person A automatically gain authority over 1 or both of them (or neither)?

3. Does person A, person B, or person C have some qualifying, natural characteristic that automatically ascribes the right of authority to them over the other two?

Remember when thinking about these questions: we are discussing the right of a person to both make rules and to force others to obey said rules.

posted on Feb, 25 2016 @ 04:43 PM
link
Having the 'power or right to give orders. In that nobody will step up and stop even if abusive or harmful. Thats from power not from being in the right.

I just watched parts of Schindler's List again. Within the confines of the Camp the Nazis had complete authority. One misstep and you're dead.

Consent is the only moral justification for gaining authority over another human being.

If person A consents to be governed by person B, person B's authority does not lend itself to exacting obedience from person C. It can't. We could deduce that authority is derived from the individual.

Having the "power" to hold authority is an immoral argument in the sense that authority is being justified by one's ability to beat people up who may disagree with your authority. It is a "might makes right" argument and is inherently circular logic:

There does not have to be any relation. They just have to live close enough to one another to count as a "society." In the same sense that someone living in California can agree that person A (whether Hilary Clinton, Donald Trump, or Bernie Sanders, etc) may hold authority over them, and somehow that authority extends to people living in Ohio, or Tennessee, or Florida, etc.
edit on 25-2-2016 by CharlestonChew because: (no reason given)

originally posted by: NthOther
Authority is derived from a monopoly on the use (or potential use) of force.

I mean, for our current use of organizational powers that is the most honest argument for what we actually do.

There is no justification for the use of power to force people, who do not consent to your authority, to obey you.

My argument is that someone who uses that justification has no authority.

What about the 1st question:

If person A gives his explicit consent to person B, to allow person B to hold authority over him, does person B's authority also extend to person C?

Do you think that person B's authority extends to person C?

Except that using your definition it is still authority.

Depends on power relations. I am taking both a liberal and realist view of the world which is how it really works.

Look. Im just answering as IR theory has it and how the actual world works and using your definitons.

That explains so much about the 1930s.

Seems to be part of our genetics that we have to "follow" or "obey" somehow.

Thus, I love Loki's quote in the first Avengers movie:


Is not this simpler? Is this not your natural state? It's the unspoken truth of humanity, that you crave subjugation. The bright lure of freedom diminishes your life's joy in a mad scramble for power, for identity. You were made to be ruled. In the end, you will always kneel.

Oh, I forgot then the old man stood up and said: "Not to men like you."

But in my version, there's no Captain America and the geezer gets turned to dust.
edit on 2/25/2016 by truthseeker84 because: (no reason given)

posted on Feb, 25 2016 @ 06:01 PM
link
a reply to: CharlestonChew
It might be useful for you to go to the older philosophers like Hobbes and Locke and read up on the concept of the "Social Contract".
This is a corporate agreement among the members of a society to accept a source of authority to provide order amongst them.
It is best to think of this original "contract" as something implied and only half-conscious, rather than explicit.
Hobbes was responsible for the statement that human life without some such arrangement would be "nasty, brutish, and short" (as it might be again if the anarchists got their way).

You beat me to it. I would throw in Roseau.

Locke and Kant disagreed about Hobbes state of nature comment. They all were part of different revolutions. Some 'bloodier" than others.

Personally I like Roseau and even Spinoza on the social contract and freedom.
edit on 25-2-2016 by luthier because: (no reason given)

South Park even has a bit on it.

If I'm attacked, I have the right to fight back. So, natural rights can be a source of authority in addition to consent. I have a right to fight off an attacker whether or not the attacker has granted me consent to do so.

Have you read my signature by chance?

The social contract is complete make believe. A contract requires review, counter-offer, and acceptance/rejection by all parties involved. Did you read that? A contract can be REJECTED.

The social contract implies that authority is derived from the consent of the governed, but in practice it is used to excuse enslaving person C when person A consents to be governed by person B, when person C gave no such consent.

The only reason to use a "social contract" is to excuse any evil done to a person under the guise that said person "tacitly agreed" to the mistreatment.

It is an intellectually dishonest argument for abusing other humans while pretending any alternative would result in chaos (without being able to see the chaos it causes).

Want organization? Build a society on the concept of explicit contracts according to contract law. Psychopaths would rather stick to the ambiguity of the "social contract," though, because it gives them the power necessary to abuse others with impunity.

posted on Feb, 25 2016 @ 08:17 PM
link
Person B has the potential to exercise some authority over C by using A as a proxy. The extent to which B gains from any trade between A and C is dependent on the level of authority granted by A to B and the level of autonomy C is able to exercise when dealing with A.

Both A and C should cut B out completely.