posted on Feb, 25 2016 @ 12:52 PM
link
As Hillary counts on the black vote, BLM strikes questioning her flip flops with the question which Hillary. Now to make things worse is there is video going viral on youtube and #WhichHillary Hashtag is currently trending on twitter!

“Hillary Clinton has a pattern of throwing the Black community under the bus when it serves her politically," Williams said in a statement before the event. "She called our boys ‘super-predators’ in ’96, then she race-baited when running against Obama in ‘08, now she’s a lifelong civil rights activist. I just want to know which Hillary is running for President, the one from ’96, ’08, or the new Hillary?”

The Clinton campaign didn't immediately return a request for comment.


Which Hillary? Why Clinton Needs To Answer The Question


Today, the question on everyone’s mind is “Which Hillary?” The question refers to Hillary Clinton’s wavering stance on a number of current issues, varying statements about historical events, and conflicts between her positions on important matters and her campaign’s financial reality. Conflicting statements made by Clinton over the past few months have left many American voters viewing Hillary’s platform as anything but solid. As a result, many are quickly losing faith in Clinton’s ability to stand firm on important issues.

The most recent incident to raise the “Which Hillary?” question took place on Wednesday during a Clinton campaign rally in South Carolina. According to Huffington Post, the event’s interruption was caused by two activists representing the Black Lives Matter campaign. They asked Clinton to apologize for a statement she made in 1996 and for policies enacted during Bill Clinton’s presidency that led to increased mass incarceration of blacks. Their view of the candidate contradicts the image Hillary Clinton has tried to promote during her campaign through words of support for black justice. The activists apparently view Clinton’s words as nothing more than a ploy to win the African-American vote

American-made F-15s are being used by Saudi Arabia to destroy Yemen, killing thousands, including children.

She is a terrible candidate, but every candidate we have is unelectable.

My only wish this year was for no Cllinton or Bush. We're half way there.


I am shocked that HRC is doing as well as she is, it was fun seeing all the #WhichHillary tweets.


Ashley Williams says no to Hillary! 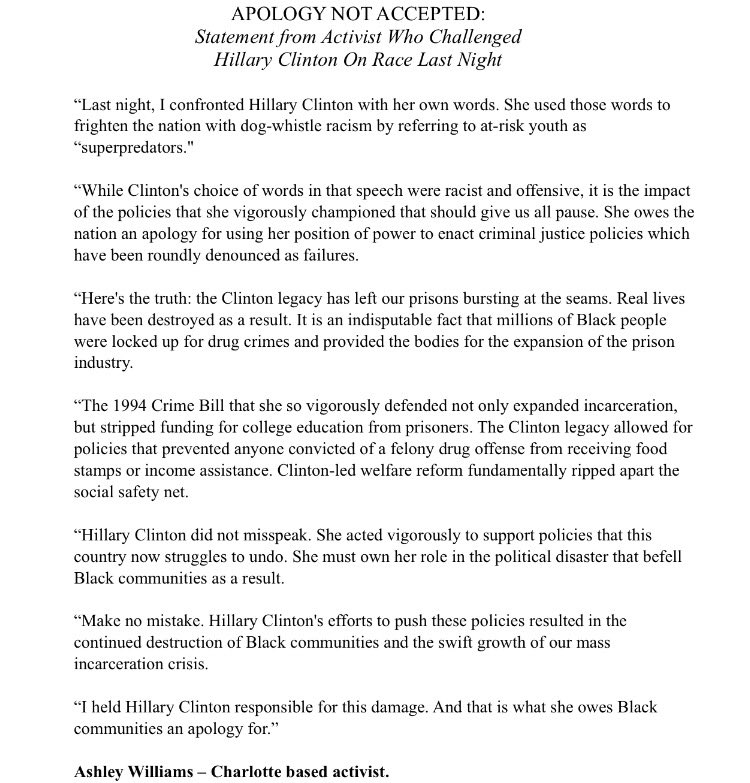