lightedhype
+15 more
posted on Feb, 25 2016 @ 12:01 AM
link
Does anybody else get SO creeped out simply by the sight of old men standing around in ritual robes?

Good lord. I feel like I am in Assassin's Creed! Is this real life still?

The following is worthy of its own thread.


WTF is going on in the world of the global elite bloodlines? It's almost as if they are having a private civil war among themselves and we are seeing snippets of this emerge in news like this.

Im thinking the internet has impacted their ability to fool the people as easy as they use to with sites and commentors like we have here.probably lots of finger pointing

Also I think their is infringement from new oligopolies versus old. For example the net neutrality ruling fight between comcast,verizon,att old oligopolies versus new tech oligopoly google,amazon,Netflix . The two oligopolies have differing business models which negatively impacts eachother based on how the Internet is regulated.

posted on Feb, 25 2016 @ 12:21 AM
link
I dont know who did it or why, but that was a hit if ever there was one. The child sex slave thing could be real, or it could be made up to attack his character before the perpetrators are exposed, or even trolling. It looks to me like a lot of different groups had motive, from secret societies and the vatican to obama and drug cartels.

All i know is this assassination is nearly as big of a deal as kennedy and 911. More subtle to the masses but greatly impactful amongst the ruling elite and levers of government. It was a hit on a supreme court justice for effs sake.

originally posted by: JourneymanWelder
do they not care to find out how Scalia even died? They owe closure to the families if nothing else. I thought I was loosing it when they said no autopsy. Why? Cause they know how he died but they wont tell anyone? This is so fishy.

It is far too late now. His bodily fluids were drained and disposed of, his body was embalmed and he is now buried. His body was escorted by a patrol of police as it was transported. everything about all of this is fishy.

Why mention anything about a pillow if it were simply 'above' his head and not on his face. If poindexter were so interested in minutia then how about the curtains, were they drawn? Was there a shoe in the corner? no, just the pillow and how his clothes were neat.

Some people say that any assassin would have removed the pillow. But when you're so overt and know the public will simply ignore the facts because this world has gone to pot and nothing makes sense any more, it is a message sent to others who may be so inclined to be in opposition to the status quo.

As posted above, sleeping with the fishes.. couldn't have been any more obvious unless they had left a horses head in the bed next to him.

originally posted by: milano
a reply to: Sublimecraft

Would not suprise me, but not much does these days. Trump for president? we are dekcuf.


Another bush who cannot open his mouth without being a joke, another clinton who appears to revile in murder and is guilty of colluding with a known enemy, some freak who cannot even debate or someone who seems to have the balls to fix things, in his own arrogant way?

I dunno.. you're dekcuf no matter which way you look at it, I believe.

posted on Feb, 25 2016 @ 01:25 AM
link
a reply to: Sublimecraft
That is very creepy, and definitely worth looking into. I bet if every public official had to disclose their secret affiliations nobody would vote them in.

And what's with secret societies and hating women?

posted on Feb, 25 2016 @ 01:34 AM
link
a reply to: SargonThrall
Well, public registries over in Europe were found to be discriminatory and a violation of basic human rights.

posted on Feb, 25 2016 @ 01:37 AM
link
a reply to: KSigMason
One might argue that discriminating against females is a violation of human rights...?

posted on Feb, 25 2016 @ 01:59 AM
link
a reply to: SargonThrall
Well, most "secret societies" are private groups and can choose who they allow in; freedom of association and all. But I'll be amenable to allowing women into fraternities when sororities give me a bid card.

posted on Feb, 25 2016 @ 02:22 AM
link
a reply to: KSigMason
They can choose who they allow based on merit, but surely they are not above the law of the land? Forgive me for saying but I think it extremely childish to use sororities as an excuse when they were established as a reaction to endless fraternities in the first place.

Masonry didnt originally allow black people either, they told them to start their own Prince Halls... but that's another story. Luckily they got over that hurdle... mostly.

Masonry didnt originally allow black people either, they told them to start their own Prince Halls... but that's another story. Luckily they got over that hurdle... mostly.

It hasn't really changed just handled differently than before I reckon.

originally posted by: unicornholiday
I believe he was killed.
Why? Not really sure

Probably because Obama has a certain amount of time to install a liberal and the agenda is more important than one man.

I have occasionally wondered if he even really died. Perhaps he just stepped aside so they could rush a new judge in while Obama is still president.

I have been working on this theory for a long time. I think they use these characters for as long as they're useful. When they get too dirty (or near the end of their useful life) they toss them out like a dirty rag and replace them with a clean slate. Then the whole cycle repeats. The new guy always starts clean and can do all kinds of stuff that wasn't possible with the old story. Too many plot holes.

If there is a sudden twist that (supposedly) nobody expected and Obama's nominee sails right through (as I expect will happen like clockwork) that will create the perfect excuse as to why the conservatives can't stop the liberal agenda for however long it will be until there's another conservative nominee. Plausible deniability is always important in a fictional story.
edit on 25-2-2016 by BrianFlanders because: (no reason given)

I wouldn't say that they hate women, Aaron russo? was pretty certain and convincing that international banks helped support women's right movements in the past so they could collect more taxes.

I bet they would be pretty reluctant to let anyone in from poor minorities to poor white people, un-influential men and women.

Secret society's are old and their foundational branches even older. We all know a woman's worth back then.

The funniest thing I ever heard.

posted on Feb, 25 2016 @ 07:03 AM
link
I want to see the photo of Scalia frolicking in the nude in front of a wooden owl. He probably died of embarrasment. 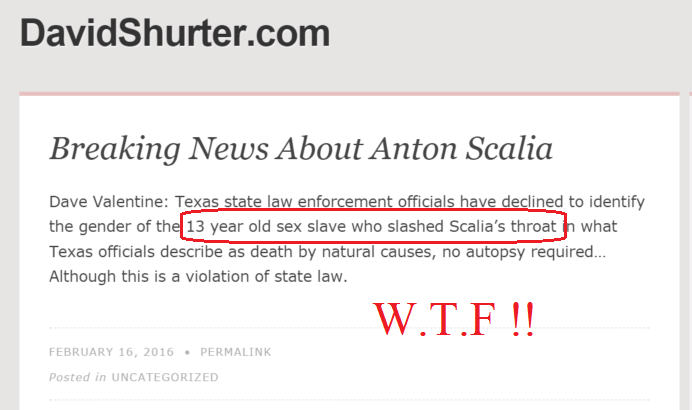 @ IMATAT - go ATS members, once again leading the pack in digging up the dirt!!!


It's apparent to me the Corrupted Ones are losing their dark-enabled protection from detection more and more.

The funniest thing I ever heard.