Bill and the Supersonic DC-8.

posted on Feb, 23 2016 @ 11:00 AM
link
In 1961, a test pilot by the name of William M. Magruder, came up with the idea of attempting to fly a DC-8 (specifically tail number N9604Z) faster than the speed of sound. A feet that no other jet liner would accomplish till the Concorde and TU-114 in the 70's. It also served as a sort of one-up on Boeing's 707 of the time knowing Boeing would never attempt to be second to the prize. 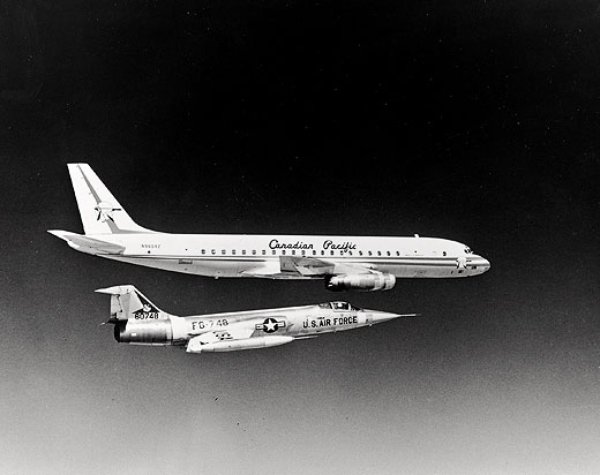 The plan was to take off from Edwards AFB, climb up to 52,000 ft (a record for a jet liner at the time) and put it into a 0.5G dive. During the dive they were successful in getting it to Mach 1.01 at about the 45,000 ft level for about 16 seconds. Getting to that speed seemed to be the easy part however. Getting it out of the dive proved to be a bit of a challenge as the elevators did absolutely nothing when they tried to pull out. The stabilizes, which would have also helped pull them out of the dive, wouldn't work either because of the load they were under at that speed and AOA they were trying to achieve. What Magruder decided to do was push into the dive even more, this allowed the load to lighten on the stabilizers so that they could be deployed. He eventually recovered from the dive at 35,000 ft.

But that's not the whole story, something interesting also happened before the flight ever took off and I think is a testament to the "Barn Storming", brass nads mentality of test pilots of the day.

The night before the flight took off from Edwards a tug apparently rammed into the DC-8 and damaged the leading edge slats on the wings rendering them in-operable. That meant that they had to take off with flaps up as the slats increase the amount of lift the wings have at slower speeds. This also meant that they wouldn't be able to control the aircraft if they had an engine flame out. They made the decision to go for it anyway, damn the consequences.

We took off at Long Beach and flew to Edwards. We only had fuel for a half-hour flight once we got there, because we wanted to be light, to climb. The night before, at Long Beach, somebody had dinged the slots [devices under the wing leading edges that improved low-speed lift], and they didn’t work. We took off with flaps up, which is kind of a no-no because at takeoff thrust, you can’t control the airplane if it loses an engine with flaps up—there’s an interlock on the rudder.

Magruder was also no stranger to flight testing. Before he worked for Douglas Aircraft as a flight test engineer, he was a test pilot and flight engineer for the F-86 and B-52 programs. He flew with Alvin M. "Tex" Johnston (of the Boeing 707 barrel roll fame) on the B-52 development program and Chuck Yeager, who happened to be piloting the F-104 chase plane during the DC-8 supersonic flight.

The sad part of this story is the fact that that particular aircraft never made it into anyone's private collection or any aviation history museum. After the flight test was complete, it was transferred to Canadian Pacific Airlines where it flew till 1980. It was then sold for scrap. 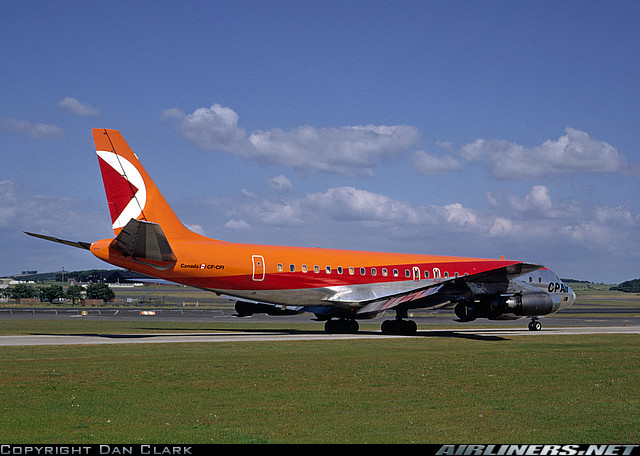 Ah the good old days. Damn the consequences and full speed ahead.

he had yeager up there with him....that gets the juices pumping....couldn't fail.

that was before they solved the elevator shape for supersonic

True, Mach 1 may be achievable as an airspeed, but if the aircraft is not designed for it, you may lose control. The A-4 had a problems with supersonic flight also. While fairly achievable a dive, the elevators would no longer function in that flight regime. Oddly, the deployment of the flaps/slats, when stuck in transonic/supersonic flight, could disrupt the airflow enough to slow down the aircraft and return controls back to the surfaces designed to move the jet. Total cowboy move to fly a dinged jet outside of its envelope. Those guys were awesome.

originally posted by: cosmania
a reply to: buddah6

True, Mach 1 may be achievable as an airspeed, but if the aircraft is not designed for it, you may lose control. The A-4 had a problems with supersonic flight also. While fairly achievable a dive, the elevators would no longer function in that flight regime. Oddly, the deployment of the flaps/slats, when stuck in transonic/supersonic flight, could disrupt the airflow enough to slow down the aircraft and return controls back to the surfaces designed to move the jet. Total cowboy move to fly a dinged jet outside of its envelope. Those guys were awesome.

I agree with you! To fly past the barber pole makes you a test pilot. There are old pilots and bold pilots but no old bold pilots! The only remaining pilots are just lucky ones.

Didn't the A-4 have a horizontal stab. and elevator which would explain the sonic flight difficulty? Sonic aircraft have a single piece stabs due to the center of pressure moving to the rear of the controls as speed increases.

posted on Feb, 23 2016 @ 07:20 PM
link
My father was stationed at Edwards during the mid 60's. He was in electronics and got to work with flight simulators....he used to talk about seeing Yeager and the other test pilots . My older brothers (Probably 7-8 yrs old ) were outside one day...and saw one of the test pilots ride a plane into the Mojave desert. It turned out to be one of their classmates father . You dont forget things like that.