The Sheivae project # Disclosure about VGR, Curiosity and Mars

posted on Feb, 22 2016 @ 02:50 AM
link
I'm Viktor, I was born in South Africa in 1971. I worked in small company specialized in private events and communication. Initially, I was doing my job and was not interested by the UFO'S, but one day I was met a man ( during an event ), this man worked unofficially for a company, company directly connected to the nasa, his work was secret so he could'nt speak to me of it and in 2011, he retired of this company and he moved of USA. He became my friend. Unfortunately he died of cancer in 2014. Before his death, in 2011 he told me about this story and I worked on this during 5 years. I worked with some people (Ufo experts, multimédia, engineers, some people working for the government or companies related to him), we are investigated and I decided to disclose everything I had.

For the moment, I disclose the audio files and in few days or weeks, I will update my website and my youtube channel with others many things.

One of my contacts (ufosightingsdaily) send to me this picture of an object on mars : 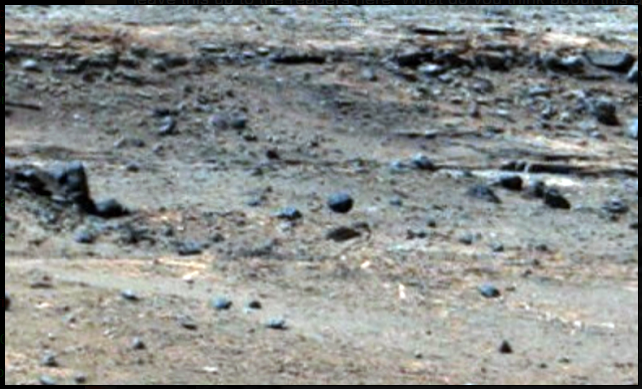 The only thing I knew (about my story) is that the probe was small and in two parts.. Coincidence is strange.

We believe that this entity has found the way to understand and respond with that she heard with the VGR. For now this is the best thoery about that : Assimilation.

This vocal files was found in the probe. Others things will be disclose in the few days or weeks. You can believe me or not, this is not a problem but please respect my work and the risks I took. If you have any questions, for all contacts : Thesheivaeproject@gmail.com or notify me here. I have website but i don't know if I can put on my thread, you will find him on the video.

What do you think guys ?

Thanks for your support.﻿

posted on Feb, 22 2016 @ 03:15 AM
link
Are you talking about the black orb thing that seems to be in the center of pic that seems to be levitating ?it does look like a shadow under it a reply to: Vikttsp

posted on Feb, 22 2016 @ 03:16 AM
link
Frustrating to say the least. .. post and run!
Never actually makes sense to me when members do that.. people ask the opinions of other but go offline as soon as thread has been posted.
I understand people have lives but you would think they would post the thread when they have the time to read a few replies.

originally posted by: darknewt
Are you talking about the black orb thing that seems to be in the center of pic that seems to be levitating ?it does look like a shadow under it a reply to: Vikttsp

I think that must be it

Here's your video , it is absolute nonsense however.
Their English is very good dontcha think ?


Scott tells people many things , none of those things are true as he is a fantasist.
The picture is an optical illusion , there have been other such examples found.
Ask him if NASA have released the video of Cassini leaving Titan yet.

Not a good start OP.

Is that you Scott ?

posted on Feb, 22 2016 @ 03:46 AM
link
That pic has had its own thread here on ATS. It was basically debunked and it is a rock. The rock however is not above ground . Look at the foreground. The dark spots . Now look at the dark spot that you think is a shadow under the floating rock. See , the shadow is from the rock underneath. Now look at the rock on the right hand side toward the top. See the similarities ?

Thanks for posting
You will forgive me for being sceptical so far. I'm sure you are aware of certain opinions regarding Mr Wareings website.
I will not comment further until I've seen your next post.
Cheers.
edit on 22-2-2016 by Tulpa because: Spilling

The OP has planted a seed , no need for discussion as shown in his Post History

Thanks for your replies.

The Mars picture is not from me, I did not know her before talking to Scott, that's why I talked to about him on this thread , I just say it like I knew on the probe. This photo is maybe a fake or an illusion.

About the message, I don't think she speaks English, it's ridiculous i'm agree, but I think she understood our and she (or he) extracted words or anything like that.. I try to understand like you, I do not claim to know everything.

If you are any questions, I'm listen to you.


I thought about it but I don't think so, the experts I consulted are all agree on the veracity of the recording, me I'm not an expert but they are. And I'll have others informations and files in few days, especially about the origin of the probe, where's she from.

originally posted by: gortex
a reply to: Misterlondon


The OP has planted a seed , no need for discussion as shown in his Post History


yes gortex perhaps you are right.. We only had one yesterday claiming to be have been injected in an assasination attempt.. by none other than the Jewish zionists. .
Needless to say he disappeared onto oblivion when questioned about it..

Why not in good way ?

VGR = Vector Group Limited? Other than a website for a publisher of audio sermons called "Voice of God Recordings", that's all I could really find on the mysterious acronym.