maybe just maybe they didn't fall into a protected or identified hospital .

I am pretty sure hospitals are protected as they are a humanitarian in nature and not military in nature.

Also they are protected under the Geneva Convention.

Yes but they have to maintain their identity or create a identity as being such . In the Afghanistan case the workers called in their location on a daily basis . Even if there would have been a militant presence there the responsibility of the military is to issue a warning to cease and desist before taking actions to attack . That protocol didn't happen in Afghanistan . There were reports that some or all of the hospitals in Aleppo didn't identify themselves as such and didn't follow the standard protocol . I am not positive on this last part but I did see the point being argued about on another thread .

How do you know the hospitals in Syria had not ID'ed themselves? You speak like you are there?

Even if the hospitals had not made themselves known, we still have the difficult question that Russia is bombing buildings without knowing who and what is in them.

I won't defend the West in these matters, but I have reassurance from the past that they make efforts to reduce so called "collateral damage".

Cluster bombs are the epitome of indiscriminate munitions. We all complain when Israel are alleged to have used them and RT.com are currently running a story on a report from HRW in early 2015 (yes, a human rights organisation akin to Amnesty) about Saudi's alleged use of these weapons, but it's OK for Russia because, er, well the civilians they kill are all bad ones. No, sorry, just heard that they have killed no civilians at all. Phew.

You might want to check out this thread www.abovetopsecret.com... The OP is also in this thread and I linked to the BBC report on the incident in Afghanistan which touches on the protocol for both hospitals and military to follow .

I think you were suggesting the Syrian hospitals had not declared themselves as such, so deserved to be bombed. Talk of protocols for declaring and Afghanistan are a red herring. I have read that discussion and been exasperated by people's acceptance that it's OK for Russia to inflict high civilian casualties.

1. Why did the Russians flatten the hospitals
2. If they did not know they were hospitals, then why did they bomb buildings where they should have checked no civilians were within?

The americans have bombed civilians since the start of the Syrian Campaign.

The French, Canadians, Turks, Saud, Iranians Everyone has attacked some group that can be defined as "Civilian."

The problem is Amnesty international caters to the west.

The groups Russia is attacking, are classified as Terrorists by them and their allies.

Amnesty doesn't view those groups as the enemy... Case and point.


I think you were suggesting the Syrian hospitals had not declared themselves as such, so deserved to be bombed.

No , I was saying they might not have taken the proper procedures to mitigate such a risk . If that is the case then one could also suspect that they might be a little slack on other procedures that might leave their patience at risk of infection or other complications . Maybe a audit and a investigation might be appropriate . Russia says they have the data to show they were not there on the day in question and that the US was . Maybe the US has data as well . Maybe the hospitals have data that shows they did tell the authorities they were there . And maybe not . if,if,if,if ...questions and answers will get to the truth of the matter .

Your request requires boots on the ground.... Which right now, we don't have any... All parties involved are going on trusted tips from sources of their own choosing supported by reconnaissance. Sat imagery, and aerial surveillance has come a long way yes, but it does not tell you who is in a building. Especially considering both these things are just a snap shot in a moments time as the vehicle passes over head.


maybe just maybe they didn't fall into a protected or identified hospital .

I am pretty sure hospitals are protected as they are a humanitarian in nature and not military in nature.

Also they are protected under the Geneva Convention.

Umm not totally. that stipulation has conditions. IF they are providing support for a enemy they are a legal target.

originally posted by: Aeshma
The problem is Amnesty international caters to the west.

Amnesty is often highly critical of the West. Human rights in some countries are poor, and getting worse, especially autocracies. Group like Amnesty are often banned. Countries like Russia and China don't like Amnesty and their ilk becuase they report too much, and their revelations are embarrassing. Just like the OP.

Just wanted to add this to your point mate. 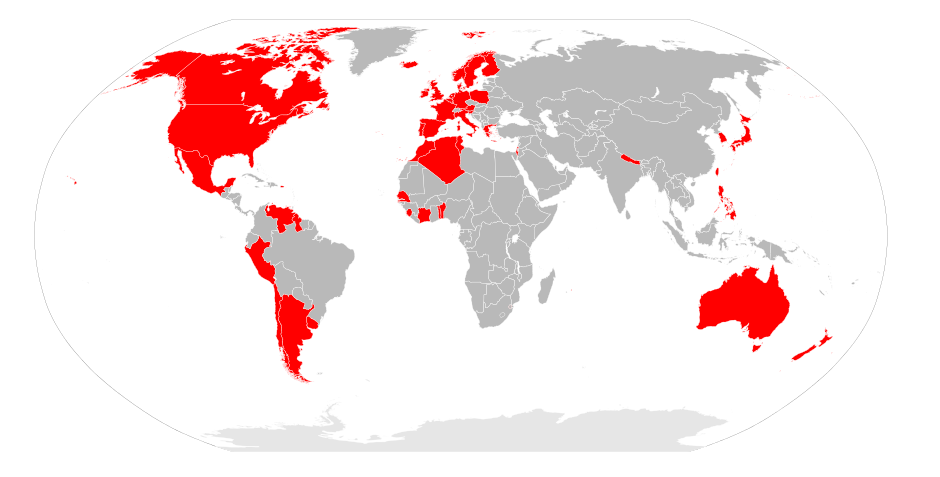 Non Government committee based out of London, all of the member nations from this map look to be Nato....

If they don't recognize the victim as an enemy, of course it's a war crime.


Hospitals are not immune to military attack. Field hospitals are a fair target to warring parties, especially if that field hospital is supporting your enemies defensive or offensive lines.

It pulls the heart strings a little more yes, but as brutal as it sounds. War-songs are not sung by the victors, and death is the best news to rile the hearts at home.
edit on PMAmerica/Chicago000402pm by Aeshma because: (no reason given)

Repeat graphic but... these are the member nations of Amnesty... All western civilian members, which unfortunately only get their news via their governments sources.


Perhaps this group has a skewed view merely by not existing in Russia or the nation the conflict is taking place in at all.......


Umm not totally. that stipulation has conditions. IF they are providing support for a enemy they are a legal target.

Yes but only after they have been warned . Its not a shoot when you know but issue the warning and if they dont stop then they become a legal target .

So, the syrian war has been raging for how long? Wouldn't it now be assumed as various foreign nations declare war on the various groups they have deemed terrorists that if you are supporting them, you may be a target?

Forgive me, but Israel uses this exact excuse every time they attack Palestine. If you are helping the terrorists, if you live in the same building as the terrorists you may become a target by association.

Oh right. Because Amnesty and presumably all other human rights groups are from the developed world, they are incapable of being unbiased when dealing with places like Russia.

So they can authoritatively criticise Western governments, which they do, but cannot do so for other countries. The fact that RT.com are quite happy to use Amnesty and HRW et al as factual reports of Western abuses and shortfalls is irrelevant. Only the West have shortfalls, but places like Russia cannot be judged.

Are there any Russian human rights organisation left, that have not been closed down by Putin? China? North Korea? etc...

Where are they getting their news ?

posted on Feb, 21 2016 @ 05:03 PM
link
Meanwhile in the real world Asad's thugs chant their motto gleefully knowing the ignorant everywhere will back them .

" We will kill your babies so you have nothing left to fight for . "

Ask any rebel who fought/fights against Asad or better still , go ask Kurds of Syria .

Truth is plain and simple ; Asad's government is capable of justifying the murder of babies to their conscious .

Russians choose to aid & abet this murder spree in Syria .


I'm not trying to make you angry. I have to wade through the filth that is my governments news, which happens to be a member state of NATO.

I do not think Russia is some golden Goose, I have how ever watched my nation as well as other member Nations of Nato kill, maim, and terrorize Civilians in the persuit of groups labeled Terrorists by my country and it's allies.

Amnesty international is a civilian organization. It does not have any more authority in collecting it's information than you or I. Yes, various Nato Governments may assist in, or facilitate investigations for them.

I find it confusing as a civilian investigating the war on my own accord, how are their sources any better.

I'm Merely trying to point out, this is a one sided view on the war. The organization is NATO member based(as civilians yes), how does that influence their position? They may be critical of their own nations actions when they hear about it, but they still rely on their nations of residence to provide them with the information to analyze.
edit on PMAmerica/Chicago390502pm by Aeshma because: (no reason given)

Hospitals are not immune to military attack. Field hospitals are a fair target to warring parties, especially if that field hospital is supporting your enemies defensive or offensive lines.

Then why don't Syria and Russia admit to bombing hospitals? Technically, they can even bomb civilian hospitals under certain circumstances. I guess admitting to destroying hospitals performing humanitarian activities looks bad, even for a "legitimate" government and a government making the world safe from Western aggression.