I dunno about religion being infringed or the rising price of aspirin, sounds like right wing propaganda to me, but I do Bernie wants to make prescription drugs way more affordable.

The government isn't going to start making aspirin and crutches and MRI machines. The government wouldn't have "ownership" (like the military) over the medical schools.

Means of production like what you envision already exist: the military.

We're not militarizing the health system.

Let me tell you something. I can't drive right now and haven't been allowed to drive for 10 years. Guess why? I have epilepsy. The doctor says I can't drive so I can't drive. End of story.

Now of course that's a rational thing. It makes sense. But it doesn't HAVE TO make sense. A doctor is already a powerful person. Bring politics into the equation and give government the golden key and you'll find out real quick just how "sick" a person can be when it works for the government.

You can't opt out of government controlled healthcare. You can't even say no if they order you to go to the doctor. Even if you're not sick.

Hahaha you have healthcare already remember? Are you being ordered to go to the doctor now? How do you make stuff like that up?

So when bernies healthcare is in place you suddenly lose your rights? No ofcourse not you can still go whenever you want you just pay a fee to a health insurance company. Noone will order you to do anything unless youve committed a serious felony and need to get yourself checked and even then you can still refuse to cooperate. Please stop making up ridiculous nonsense or fearmongering.
edit on 508pm2917000000p86 by whatsup86 because: (no reason given)

The government isn't going to start making aspirin and crutches and MRI machines. The government wouldn't have "ownership" (like the military) over the medical schools.

Means of production like what you envision already exist: the military.

We're not militarizing the health system.


Oh, our bad, Bernie is more like Mussolini. He wants to control how production occurs, but someone else is welcome to own the factory he dictates all the terms to. Remember, Mussolini called himself a socialist too.

originally posted by: Signals
Either way OP, bad for America.

originally posted by: Swills
a reply to: DBCowboy

I dunno about religion being infringed or the rising price of aspirin, sounds like right wing propaganda to me, but I do Bernie wants to make prescription drugs way more affordable.

So Bernie will dictate how much a drug company can make on their product?

Sounds like controlling the means of production to me.

originally posted by: yesyesyes
America has become so right wing that Sanders is just barely left of center compared to the rest of the world.

originally posted by: ketsuko
Oh, our bad, Bernie is more like Mussolini. He wants to control how production occurs, but someone else is welcome to own the factory he dictates all the terms to. Remember, Mussolini called himself a socialist too.

I don't know how to tell you this...Mussolini was a fascist, in fact...he created the entire fascist movement.

Fascism is a form of radical authoritarian nationalism that came to prominence in early 20th-century Europe. Influenced by national syndicalism, fascism originated in Italy during World War I, in opposition to liberalism, Marxism, and anarchism. Fascism is usually placed on the far-right within the traditional left–right spectrum.

Mussolini was a member of the Italian Socialist Party...until they kicked him out. So, I guess you're right?

originally posted by: DBCowboy
So Bernie will dictate how much a drug company can make on their product?

Given the trend in the prescription med industry of arbitrarily increasing the prices of drugs, I don't think that's such a terrible idea.

In fact, that's probably a great way to sway a number of voters towards Sanders.

You have a valid point, but sometimes, the cure is worse than the disease.

originally posted by: yesyesyes
America has become so right wing that Sanders is just barely left of center compared to the rest of the world.

The rest of the world can have him.

“A guy named Adolf Hitler won an election in 1932. He won an election, and 50 million people died as a result of that election in World War II, including 6 million Jews. So what I learned as a little kid is that politics is, in fact, very important.”

Socialism - destroying America, one snowplow and public library at a time.

I love this argument. It is perhaps the most intellectually dishonest and most stupid idea of all time.

Comparing Sanders to Stalin and Mao is not suggesting he is a totalitarian. It is suggesting that socialism has so many good ideas that they must be mandated, and in places where idealistic socialists have taken over, they have done so by killing millions of people while mandating socialism. The Soviets "collectivized the farms" by killing the farmers who resisted. And when you look at the result of this enforced socialism, you find stagnation and lowered living standards: Cuba, Venezuela, the USSR, etc. Now we can pretend China is "communist," but they surely do make good capitalists in real life.

And yes, you have a few rather tiny socialist-leaning countries who have small homogeneous populations. Bully for them. But the entire extremist idea that if we have public libraries, we must be socialists is laughable. NOBODY ever said you cannot pool resources for the common good, such as roads and fire departments, armies, and police departments, all paid for by tax dollars. Are these things technically socialist? Sure they are, but socialism suggests the government owns the means of production, and having public libraries doesn't do that.

Sanders is seen as a step in that direction. He seems to think the so-called wealthy have an infinite store of money he can divert to give free stuff to everyone else, particularly those who do not contribute themselves one dime to the common good themselves. It's a fool's game he is playing, and he's marginalizing "the 1%" just like Hitler blamed the Jews. It's the same tactic exactly. Would he personally be in favor of killing farmers? Of course not. I don't believe for a second that his as as extremist as the Marxists he admires. It's just that he's mired in a youthful past:

Sanders never made the transition. But if the extreme left gained a foothold on the means to power in this country I feel quite certain they would not be opposed to forcing their ideas on the rest of us by whatever means necessary. 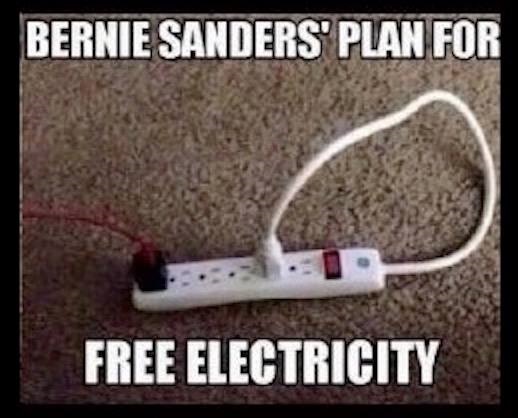 I wish I could give you more than a star

I may not agree with it, but I respect it.

You aren't making any logical sense.

Executions, famines, forced labor, glugags in Russia and McCarthyism in America were direct responses to propaganda.

None of those things would have happened without the state-run propaganda machines in Russia and America striking fear into their citizens hearts.

None of the prison guards, executioners and bureaucrats would have done what they did without the brainwashing that the other side was evil.

War is good for business, having a dependable and stable enemy makes for a great excuse to raise defense budgets. Keep the people occupied with fear of an externalized enemy.

The Cold War was a crock, a sham -- and communism in its true sense has never been realized. Human greed prevents Maxism, anarchy and communism from ever becoming a reality.

Capitalism just says, "screw it, humans are greedy so let's just push the selfish-o-meter and greed meter to the max!"

One has to wonder, though -- if a blended system that takes elements from each, taking into consideration the nature of man might be a better solution? Perhaps a system that still rewards innovation, and yet helps people realize more of their potential by giving them the basic core necessities to survive.

Human beings can't reach their full potential if they are mired down in the mud. Our civilization will forever be bogged down if only a tiny fraction of Earth's population is allowed to breathing room. How many more Einsteins would we have discovered if more people had access to healthcare, basic shelter?

I'm sorry, but I realize that I am a sprocket in much larger machine than myself. I alone am still capable of amazing things, but the truly amazing things? That requires team effort, cooperation, and brings out the best in humanity.

We don't have to sacrifice everything either. People act like getting more for your tax dollars is some kind of black magic/deal with the devil. Good lord, we should have been demanding that our government do more for us with what we give them ages ago.

We need to get over ourselves and realize that this tiny blue oasis floating in space is all we have for now, and if we're not careful we could all go the way of the dinosaurs because of our unmitigated greed and selfishness.

posted on Feb, 20 2016 @ 04:03 AM
link
a reply to: DBCowboy
Which is one of highest in USA ... BTW Aspirin was TM of Bayer AG, later participant of final solution, you can get generic under name acetylsalicylic acid or proper chemical name 2-(acetoxy)benzoic acid on eBay by kilograms or tons - much cheaper than in nearest pharmacy.
What I really do not understand is fear of many US citizens that healthcare can be even worse than it is now.

Probably notion that healthcare is industry and nothing more is bad? Who knows.

Except he's not lying to sell his ideology?

Seriously, where do you get this stuff from? If there's ONE thing almost everyone agrees on about Sanders, including those who don't like his policies (generally due to mistaken beliefs about the current state of the US, but oh well) it's that he's honest and sincere.