page: 1
81
<<   2  3 >>
log in
join
share:
SkepticOverlord
+44 more
posted on Feb, 19 2016 @ 10:43 AM
link
AboveTopSecret.com has arranged for an exclusive free viewing of "A Very Heavy Agenda, Part 1" by Robbie Martin. The video series is an in-depth analysis of the stranglehold of the so-called NeoCons on broad-ranging aspects of the American Government, no matter the political landscape of the executive or legislative branches. 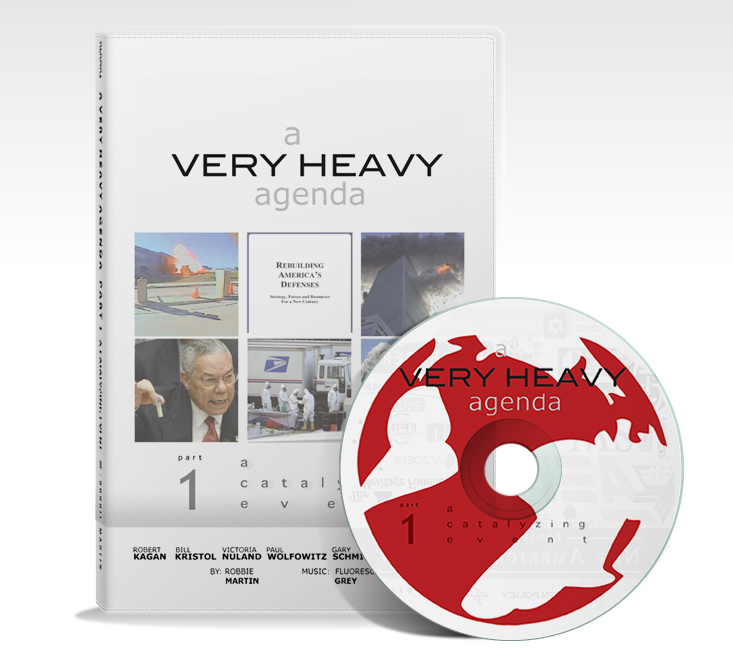 Cheney, Wolfowitz and Rumsfeld were ubiquitous in the news media as they took every opportunity to market an aggressive preemptive war policy to America. But from where did their ideas originate? A tightly knit and eminently well placed group of neoconservative thought leaders, chief among them Bill Kristol and Robert Kagan.

Part 1 begins in the panicked weeks after 9/11, as Kagan et al. seized upon the hysteria surrounding the anthrax letter attacks to further shape America’s perception of reality, planting the seeds for endless future military engagements. George W. Bush may have been understandably perceived as an idiot, but watching these wonks and academics drive the ideological engine for his administration belies a much more sophisticated strategy.


Watch Part One For Free

Go to the pay-per-view video on Vimeo at: A Very Heavy Agenda, Part One

Select the "rent" option, and type in the promo code: abovetopsecret12

The free promo code will expire on midnight this Monday, so watch now!


Then, Ask Robbie Martin Anything on ATS

Next week, on Wednesday February 24th, Robbie will come to ATS for an exclusive "Ask Me Anything" to answer all your questions. Here is his short Bio:
Robbie Martin is a journalist for Media Roots, creator of the documentary films American Anthrax & A Very Heavy Agenda, and co-host of the Media Roots Radio podcast with Abby Martin. He has appeared on Lip TV's The Buzzsaw, Cindy Sheehan's Soap Box, Ron Paul's Liberty Report, Project Censored on KPFA, Breaking The Set on RT, The Corbett Report, Porkins Policy Radio and has been interviewed by La Figaro, the BBC and the San Francisco Chronicle. He is the founder of recordlabelrecords.org and is a musician under the alias of Fluorescent Grey.

Here are some additional sources of information to help our members research this subject matter, and prepare your questions for next week.

Project Censored: 9/11 and the Rise of Neoconservative Foreign Policy

11 flags no comments. I like your avatar. Love Mel brooks movies. will read this later

Looks interesting, will be checking this out! And a great partnership/opportunity for both Robbie Martin and the ATS community!

Thanx for this Post SO! Heading over to Vimeo now!
So far it looks like I am going to Love sinking My Talons into this!
Syx...

Thank you for ATS. I'm still not sure about it, but thank you.

posted on Feb, 19 2016 @ 11:47 AM
link
Should be some good eye opening understanding of the play book of what could easily be considered a group of Narcissist"s using a Jesuit tactic . Throwing their fellows under the bus is not a issue or a problem because the ends justifies the means .

posted on Feb, 19 2016 @ 12:49 PM
link
a reply to: SkepticOverlord
I'm at 1hr 11minutes and the "cheap-Philip Glass, Steve Reich" music is making want to vomit, it is obnoxious. Also the use of constant "tension drone music" in the background makes it very uncomfortable, those in charge of production should grow up.

Otherwise good information about the vermin that is "Project for a New American Century" Filthy b•stards. Why they are not a Global Target is beyond me.

Going back to finish it when my headache subsides. (maybe their intention)

posted on Feb, 19 2016 @ 01:00 PM
link
a reply to: SkepticOverlord
Very well put together. Lots of information, some I never had put together. It is paced so very well, you can;t look away. Thanks for the link.

originally posted by: buddha
If you use the promo code.
you dont need to use a real E-mail address.
But you will not be able to go back to it,
so watch it in one go or keep the brawser open.

I did the rent and promo with no problems, I am now to seat back and enjoy the video.

posted on Feb, 19 2016 @ 01:53 PM
link
Wow I'm just a faithful lurker, but I just finished watching this today. Posting to say; I suggest every single ATS member watches it as well.

If/once you get past the ridiculous score and low production quality you WILL be hooked. It masterfully fits together all of the puzzle pieces most of us knew or assumed, and quickly. Very very well done. I can't wait to watch part 2 and part 3.

It also highlights some of the people who *actually* pull our devastating foreign policy strings, and how it truly makes no difference who the President is or what party they are affiliated with.

posted on Feb, 19 2016 @ 03:44 PM
link
A very informative documentary so far (up to about the 1hr 10 mark atm) thanks to the filmmaker for sharing it and to ATS for providing us the opportunity to view it.

I feel that there should be a warning that at about 1 hour into the film there is a long running scene of TV images that includes shots that are particularly brutal in nature.

Whilst I agree that the images are contextually relevant to the narrative, I feel a warning should be issued for those of a sensitive disposition.

posted on Feb, 19 2016 @ 03:51 PM
link
If people really wanted to break the 'neocon' stranglehold of America they would at least acknowledge the NEOCONS in this video.

The preceding 8 YEARS before GW,Rumsfeld, and Wolfowitz. Why do people ignore it ?

People should be talking about what exactly led up to the events before 9-11.

Like the first world trade center attack, The USS Cole bombing, the embassy bombings around the world.

And then there was things like Somalia. Where the military mission became about as asinine as it can get.

And When Al Qaeda first actively engaged the US military though the administration of the time completely IGNORED it, and the FIrst WTC, and the rest.

The only agenda I see here is the same old one I have for the last 15 years.

In that video I posted the left sounded no different than the right.

Did you actually watch the video? I am asking because one of, if not THE main point of the video is that the Neocons are in fact bi-partisan and beyond the control of, but heavily influential on any particular party, left or right.

Yours is a curious reaction to the video.

Sublimecraft
+9 more
posted on Feb, 19 2016 @ 05:10 PM
link
This perfectly corroborates my confirmation bias (which is not bias) that we, the private citizens, are being lied to and manipulated by an elite global cabal hell bent on creating a new world order through planned chaos.

Left vs right, black vs white and every other label is merely an illusion - the reality is that it is simply them vs us and planned to keep us focused and angry at each other instead of looking behind the curtain and discovering our true enemy.

Productions like "A very heavy agenda" and sites like ATS at least give "us" an understanding that there is indeed a curtain and there is indeed someone standing behind it and that is the real world we live in, not the make-believe kardashian FOX shopping mall special sales crap shoved down our throats on a daily basis.

Thanks Bill, and thanks Robbie, I look forward to your contribution next week.

Will definitely check this out.....thx