Turkish military vehicles have crossed into a Kurdistani area in Syria, Afrin, just over the border, a Kurdish news agency reported adding that the troops started to dig a trench near Meidan Ekbis, a town in Aleppo province. Dozens of Turkish military vehicles advanced 200 meters into the Syrian Kurdish region in Aleppo province on Thursday, ANHA news agency reported. It added that the troops started digging a trench between the towns of Sorka and Meydan Ekbis. According to the agency the construction of a concrete wall on the Syrian border in the area is ongoing as well

Is this a serious escalation? The beginnings of the creation of defensive lines for the inevitable land invasion By Saudi back Turks into Syrian Territory?

I don't mean to sensationalize this, but along with the shelling witnessed, striking both Syrian National forces as well as groups allied both with Russia and the US. It certainly feels like things are heating up.

The Syrian Afrin district bordering Turkey is predominantly Kurdish with a population estimated to be of more than 170,000 people according to a 2004 census. The area is part of a de facto autonomous region of Rojava, or Syrian Kurdistan since 2013. A Turkish security source told Reuters that they country’s military shelled Kurdish YPG militia positions in northern Syria on Thursday. The source added that the shelling came in response to cross-border fire. The developments come as Turkey accused forces linked with the Syrian Kurdish YPG militia of an explosion in Ankara that killed 28 and injured 61 more. On Thursday, Turkish Prime Minister Ahmet Davutoglu vowed to continue the military efforts against Kurdish groups in Syria. The Syrian Kurds, in turn, denied responsibility for the attack and put the blame on Islamic State militants (IS, formerly ISIS/ISIL).

Furthermore, with the latest attacks in Turkey, a variety of members seem to feel Turkey is not likely to stand Idle by and allow it's citizens to become the next victims of ISIS. I fear further conflict is inevitable.

The full article is linked below.

posted on Feb, 19 2016 @ 02:07 AM
link
Strange...
a week ago I had a dream trenches were dug then troops backed off...
Nukes were used in 4 surrounding areas detonated in the air as an emp attack taking out all electronics in the area...

I seriously hope that is not the case, but I've been dreaming of awful conflict for years... I know there has been awful conflict somewhere in the world pretty much always. So I know I wasn't dreaming of this, or necessarily any specific incident. How ever I am growing concerned with the middle east. 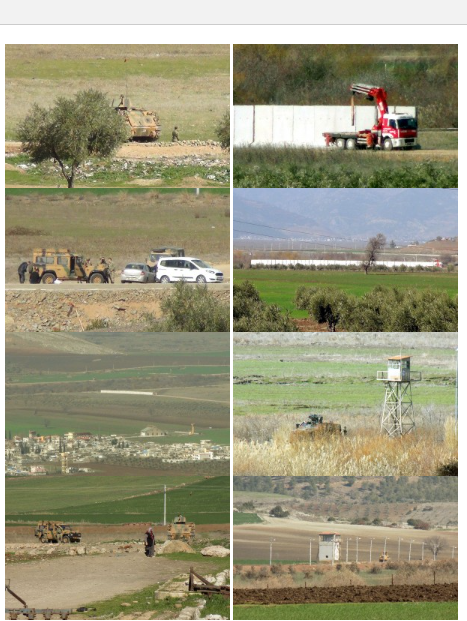 Image links to original source of the reports.
edit on 2/19/2016 by AmericanRealist because: (no reason given)

However, perhaps Turkey is learning from Russia's Ukrainian farce and is looking to annex a nice slice of land. Methinks Russia would applaud such initiative.


It is clear desperation, as their terrorists have lost all ground right up to the border now. Don't worry, it will be on BBC and Fox and CNN in the morning. So feel safe in that your only purveyors of truth in media will be reporting it soon enough.

originally posted by: paraphi
It is RT.com, so take with a pibnch of salt.

I don't understand this kind of ignorance.
do people really just disregard things because they dont like a country?

If rt.com said the earth was round you'd still act stupid and say "its rt.com so ill take it with a pinch of salt"

But if a western murdoch media news outlet says it your frothing at the mouth like a dog.

truth be told I find rt.com more reliable than most, at the moment.

i hope this is the turning point.. we (the west) need a big slap down to pull our heads in a bit... or else we as a civilization are doomed.

originally posted by: Agit8dChop
I don't understand this kind of ignorance.
do people really just disregard things because they dont like a country?


Ah, ignorance. I think you need look the word up. It's gullibility to believe a state-owned propaganda machine, as is RT.com, without question or verification what they are saying.

I love Russia. I just think the Russian people are being ill served by a kleptocratic autocracy that controls the media, represses civil rights and all that.

To the OP. Is there any reliable source that Turkey is invading Syria?

It is going to be very interesting seeing how all of this plays out.

Turkey truly has no legs to stand on and neither does their ally in this matter Saudi Arabia.

Now it is clear that ultimately they have been used as pawns by the west and are currently being thrown to the wayside and out of desperation are attempting to start a major conflict.

Throughout the past 5 years they (NATO, Turkey, Israel, Jordan, Saudi Arabia, Qatar... the list goes on) have funded, armed, and trained the mercenaries known as Daesh to slaughter anyone and everyone in order to topple Assad and ensure that Russia, Iran, Hezbollah and their allies would not be able to become a power broker in the middle east.

About 5 months ago Russia stepped in officially and changed the game entirely. They have since decimated the murderous thugs and pushed them back to the areas from which they came, most notably on Erdogans door step. They are months away from winning the war against this army of terrorists, moderate ones included!

The question now becomes, how is it that NATO could defend a country that has committed a variety of acts of war.

A. Been buying oil from Daesh.
B. Armed, trained and facilitated their path into Syria/Iraq
C. Shot down a Russian Plane
D. Invaded Iraq
E. Currently shelling Syria and threatening to invade.
edit on America/ChicagoFridayAmerica/Chicago02America/Chicago229amFriday2 by elementalgrove because: (no reason given)

Sorry to disagree but I have found RT a better station with up to date news than any of our State run by Murdoch stations.

Oddly enough they even have the decency to put some of the controversial stuff going on in the UK on which our media seems - not to have considered important - which many of us would never have known about.

We know they are both liars, but to the Rest of us you look a little silly taking sides in the manner you have

Not a very good look

Isn't it amazing how every one wants a piece of Syria? You know I never thought it possible that politicians would be so gung ho.

All the players in Syria are dangerous countries. Is Turkey flexing its muscles or merely trying to take land to set up camps for the refugees off Turkish soil? That would make sense and I could see the EU backing that one, but with Assad winning I would wonder how far that policy would go and what would be the repercussions?

Takes our eyes off the financial situation though doesn't it?

Probably a response to the recent bombings in the Turkish capital.

Syrian regime responsible for Ankara bomb attack: PM
edit on 19-2-2016 by Xcathdra because: (no reason given)

originally posted by: spy66
The US are droping bombs in Libya right now. Said to be against a ISIS base there.

The mayor of the western Libyan city of Sabrathan told Reuters unidentified planes carried the air strikes, killing as many as 40 people.

originally posted by: Shiloh7
Sorry to disagree but I have found RT a better station with up to date news than any of our State run by Murdoch stations.

Well, that's because it caters for your worldview. Myself, I shop around for my news and corroborate stories like this because they tend to be highly slanted. Remember that Russia needs an enemy to justify their actions.

Probably a response to the recent bombings in the Turkish capital.

That seems to be a little to convenient, a little bit like the whole Assad using chemical weapons on his people in 2013 which turned out to be our favored "moderate" rebels. Whom we have continued arming and funding to date.

They are finally close to achieving victory, after 5 years of absolute hell and you honestly believe that the Syrian Government would choose this moment to attack Turkey.

One of the clearest pieces of propaganda I have seen in quite some time.

I believe these two scenarios are worth considering.

A. Members of Daesh who were still in Turkey upset that Erdogan is not allowing their murderous friends back across the border.

originally posted by: Shiloh7
a reply to: paraphi

Sorry to disagree but I have found RT a better station with up to date news than any of our State run by Murdoch stations.

Oddly enough they even have the decency to put some of the controversial stuff going on in the UK on which our media seems - not to have considered important - which many of us would never have known about.

RT News has an obvious Russian lean on all its news. They are reporting on the UK negotiations within the EU with a slant on the disorganization and the negative to encourage UK to jump out and sow further seeds of doubt about the EU..
The other main news channels have a western ish slant even Al Jazera.
edit on 19 2 2016 by skywatcher44 because: (no reason given)