Pope singling out Trump for his wall is incredibly...stupid…and a blatant political statement


Looking to help ease the crisis, the pope urged some 120,000 parishes across Europe to take in one family each. His appeal has drawn a mixed response so far.

originally posted by: Tiamat384
a reply to: grey580
Of course he has the right. As the States have the right to tax the Church Abortion is wrong (except some cases), but this isn't about that.


Of course. I was merely using that to illustrate a point.

That some politicians in this country are pushing laws based upon a religious belief.

Whats wrong with the pope having his say.

Surely the pope has better things to do than give his opinion on the circus of US politics. Unless of course, the papacy is also subject to wealthy political influence....

No he doesn't, he 's not voicing "opinion" he's trying to get all the Catholics to follow his lead/orders/pontifications.

He has a great responsibility to not enslave and abuse people, but he is a very dark man indeed!

originally posted by: Unity_99
a reply to: grey580

No he doesn't, he 's not voicing "opinion" he's trying to get all the Catholics to follow his lead/orders/pontifications.

He has a great responsibility to not enslave and abuse people, but he is a very dark man indeed!


"I'd just say that this man is not Christian if he said it in this way," Francis told reporters in a mid-flight press conference after a trip to Mexico.

"A person who thinks only about building walls, wherever they may be, and not building bridges, is not Christian," Francis said, according to the Associated Press's translation of the press conference.

I don't see him ordering catholics to not vote for trump. If he had said something along those lines then I'd be in agreement with you.

And can you please provide proof that he's a dark man.

Its funny watching Trump supporters freak out over ever little thing though.......

Super hyper sensitive , which I find ironic because they support a man who is known for insulting people and basically the grand nozzel of douchebags

This from a pope whose own country (The vatican is its own country) is surrounded by walls and has one of the most restrictive immigration / citizenship requirements on the planet.

The pope should stick to losing his temper while meeting the masses than wading into US politics. Especially given the scandals that have occurred within the catholic church and the lack of response from vatican leadership. Aside from covering the scandals up. Questioning a persons faith... just wow.

Can we question the popes faith when he protects kiddy diddlers?
edit on 18-2-2016 by Xcathdra because: (no reason given)

did you miss the posts on the 1st page that covered some of that?

posted on Feb, 18 2016 @ 08:13 PM
link
Hypocrites have always bothered me. Especially with such an outlandish example of hypocrisy. 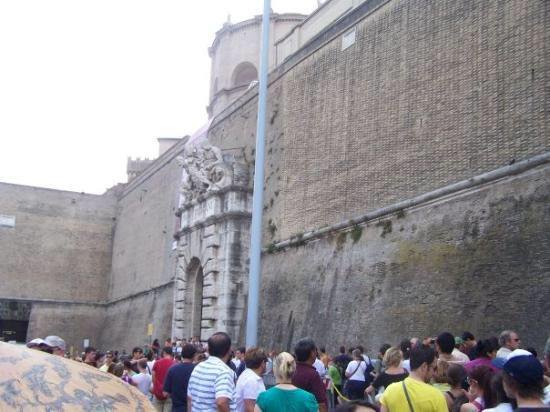 to tell ya all about what the Scripture says about the pope........no, you DON'T want me to tell about this screw-job wimpy shrimp individual that thinks he is God on earth....whom did publish officially that to let the lay people read the Bible without the church's guidance is

posted on Feb, 18 2016 @ 08:19 PM
link
Then all those Europeans who don’t want any Syrians in their country aren’t Christians either.

The pope has done and said some great things this isn't one of them.

Is what Hillary Clinton did to Libya a Christians actions.


You can’t single out one politician and one policy in a vacuum you got to like Jesus did...

Get in all of their cases


You can’t be half pregnant.


Make people tired of hearing it

originally posted by: grey580
a reply to: Indigent

Parishes as well are taking in immigrants.

April is Sexual Abuse Awareness Month, we did an outreach in the local communities, and got a good response from the local churches. When I asked if we had done an outreach to the local Mosque, I was told we are not allowed to approach the Mosques as it may offend some of the people and they may view it as a criticism and Anti-Islamic.

So are the Mosque not allowed to be approached for support and providing for the refugees and asylum seekers as well?

Nope.. I read the op and responded to his post. Is there any reason people cant have the same thoughts?

2. He also qualified his response (source):

Asked whether he would try to influence Catholics in how they vote in the presidential election, Francis said he “was not going to get involved in that” but then repeated his criticism of Mr. Trump, with a caveat.

“I say only that this man is not Christian if he has said things like that,” Francis said. “We must see if he said things in that way and in this I give the benefit of the doubt.”

3. Yes, Vatican City has walls. Walls that are centuries old and built to defend it against medieval armies, not people who are trying to sneak across a border to work jobs that most of us wouldn't consider doing. Vatican City is also less than a quarter of a square mile in area and hosts 6 million tourists a year (6%-8% what the US does) who visit its museums, the Sistine Chapel, St. Peter's Basilica, etc.

originally posted by: Willtell
The Pope aught to be extremely criticized for singling out Donald Trump and saying his stupid plan to build a wall isn’t Christian.


The pope is in a unique place, and perfectly capable of saying that Jesus taught to build bridges, and that vain Klown Trump, who touts his own Xtianity set himself up for the correct criticism!
Trump is all about walls, and greed and selfish and vanity, and anyone with their eyes open can see he's no Xtian!
He is a pretend Xtian, a liar!
And was called on it.
Yes, most other politicians are built of the same crap, but this one sticks his neck out and thinks that his $$$ impresses God!
It sure the fk doesn't!

posted on Feb, 18 2016 @ 10:17 PM
link
The established centers of power and wealth sure don't like Trump. The Pope echoes the MSM and those in power. Trump gives a voice to those who have none and those who have don't have true representation in the media or political process.