Killing and destruction are referenced slightly more often in the New Testament (2.8%) than in the Quran (2.1%), but the Old Testament clearly leads—more than twice that of the Quran—in mentions of destruction and killing (5.3%).”


Apples to oranges is it not?

Most certainly the Hebrew and Greek literature combined has more violence than the Quran.
You must consider the time frames involved and you must consider exactly who is telling the stories about the violence.
After all you are comparing the life span of Muhammad (570 CE to 632 CE) as being 62 years to that of the the Hebrew and Greek texts which spans well over 5,000 years. Not fair at all and not reasonable at all. I do not see where a fair comparison can be made.

Now in this of which I understand there is about .7% percent more killing in the 5,000 years of OT compared to 62 years of the Muhammad's Quran. So that in itself will show that Muhammad's Muslim hordes killed more people in 62 years than did the Hebrews in 5,000 years. So are we to understand the number of people killed or just the number of skirmishes and who is the keeper of these facts?

originally posted by: Raggedyman
As for those Christians who carry out their own justice, this is not in accordance to Christs teachings.

I will keep that in mind next time a 'Christian' shoots up an abortion clinic or some random Muslim.


originally posted by: Raggedyman
As for those Christians who carry out their own justice, this is not in accordance to Christs teachings.

I will keep that in mind next time a 'Christian' shoots up an abortion clinic or some random Muslim.

Here is the problem though, as I see it. The bible ties a Christians hands. We must purge from the church anyone who is a hypocrite and leave the judging of those outside the church to God. So, we judge the hypocrites, we expel them from our congregations, and then we cannot say another word, as they are God's problem the second they are outside the congregation.

So, even though we cannot do anything about hypocrites who don't follow Jesus yet still try and use the name Christian for themselves, we are stuck taking the blame for every of their bad actions, which are not according to the teachings of Jesus.

On the other hand, Muslims are under no such laws. They can stand against anyone who doesn't follow Islam properly, and shut them up quite handily. So, if moderate Islam was the reality of Islam, and only that was according to the true teachings of Islam, then they could stand up and fight against ALL the extremists in their midst, and there simply would not be any extremism at all.

But that is not happening, and the only conclusion is, extremism is the truth of Islam, which is supported by early Islam and its prophet.

That is the difference.

The new testament you won't find human form Jesus nor any of his followers actually killing/murdering anyone. The percentage is just from the end time judgement from God to come with death and destruction. Or Jesus statements of there being weeping and gnashing of the teeth etc etc. These types of statements show it to speak more about it but that in of itself doesn't mean the followers are told to do it. BIG DISTINCTION that disqualifies this study based on how many times the words of killing/destruction is mentioned.

2nd preacher: I order you to "kill" the unbelievers. Believers rejoice in hope and love. God will love you. God is good. God is one. I tell you God is merciful to you. God will protect his people and give you much in paradise and God will not forget you.

By that study the 1st preacher sounds like more violence because of the words like kill, die, burn forever, and worse etc etc. But notice not one time did the first preacher command and order to actually kill others. Though the second preacher mentions the word 'kill" much less. His is actually more violent because of the context!

That is why this link from huff post is not accurate.

originally posted by: CharlieSpeirs
Couldn't be further from my actual point.

My point is I do not lie about Christianity on these boards or elsewhere, please be kind enough to do unto others as you wish they would do unto you, and not lie about my Faith.

Any religion that references violence, except to mention self-defence or how to avoid confrontation/escalation, in its Holy book has flaws which are open to scrutiny — Islam is no different.

I see only one false narrative here, Mr. Anderson just like Islam, clearly has a very deceptive agenda to maintain.

As the quote below says, zero intellectual integrity, zip, nada...

The correct analysis is here: 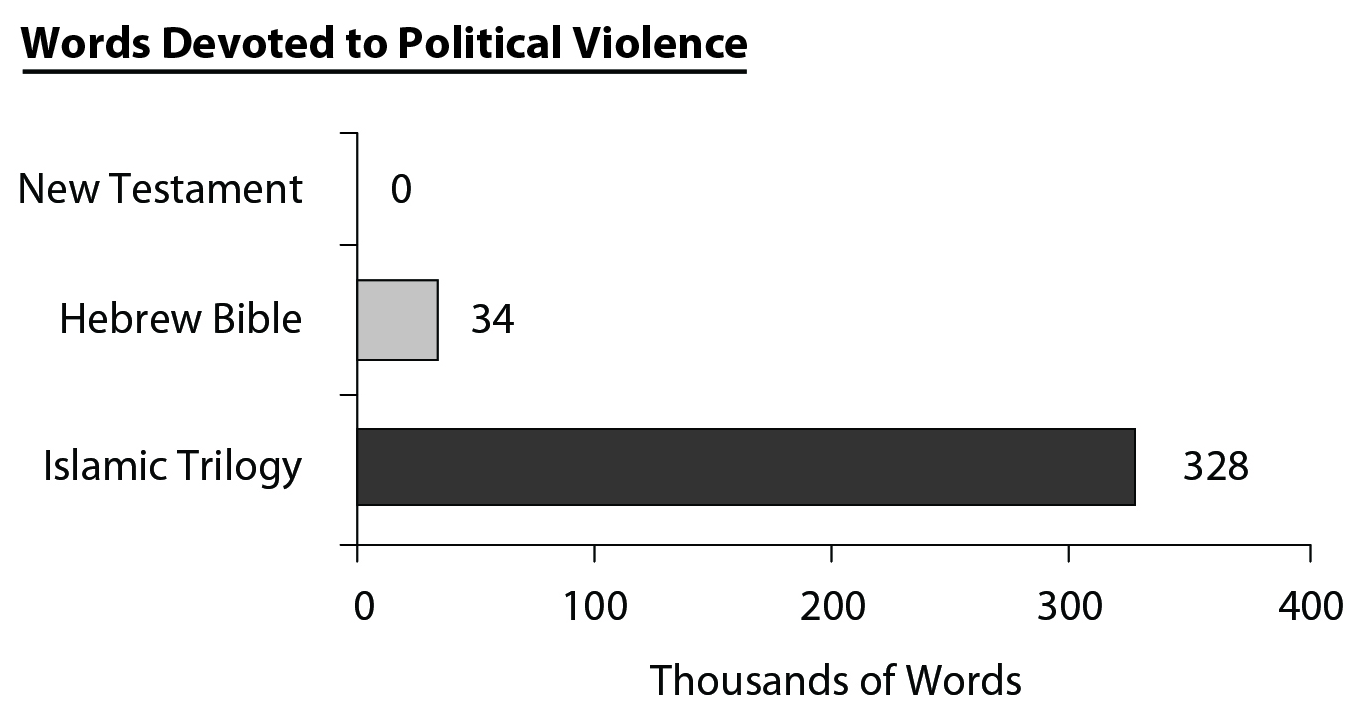 A graphical comparison of political violence in the passages of the Hebrew Old Testament, Christian New Testament, and the Islamic Koran, Sira, and Hadith.

The Bible recounts history, which has wars, and violence. The Qur’an recounts no history except to steal portions from the Old and New Testaments and exhorts and sanctifies murder, rape, slavery, looting as something that pleases a god they call allah when committed against non believers, apostates and polytheists., an adaption of the moon god al-illah. in a tome about the size of an old Perry Mason novel. The comparison is a false one.

This Tom Anderson just counted words, he never actually read the text. So he didn’t filter anything or evaluated the meaning of any whole sentence or passage.

It seems that this study neglects to note that there are > 780,000 words in the Bible and > 77,000 words in the Qur’an. In short, the Bible is more than ten times larger than the Qur’an–to say nothing of completely ignoring the contexts of anything said, especially the historical unfolding of Biblical revelation. Anderson’s study is a case of lies, damned lies, statistics, and damned statistics.

The study seems to have simply counted words that suggested violence. There is no hint in this article that Anderson took into account whether or not believers were being commanded to imitate the violent action. In the Bible, they aren’t. There are many passages of the Qur’an, on the other hand, that direct believers to commit violent acts.

What if all those times it's warning you against it? All that proves to me is this person has zero intelectual integrity, none, gone, negative numbers... - James White

I’m sorry but this is a nonsense. If the Bible says ‘Thou shalt not kill’ and the Quran, ‘Kill the unbelievers wherever you find them’, are you saying that both passages are ‘equally violent’?

Great analysis!! Using your technique, I’ve found that the Oxford English Dictionary is hideously violent too! The dictionary would be the MOST violent book, containing every known violent word!

The claim in the OP is just political posturing, nothing more.

It's a subject that religious zealots in both camps could play one upmanship for an eternity over.

The true people of faith live and let live and do so in humility and unselfishness.

originally posted by: Akragon
Where is this 2.8% found in the NT? Let me guess... Revelation?


Might just want to say six hail Mary's and make the sign of the cross before reading the below.

Everyone who hates his brother is a murderer, and you know that no murderer has eternal life abiding in him. ~ 1 John 3:15

Then Jesus said to him, “Put your sword back into its place. For all who take the sword will perish by the sword.” ~ Matthew 26:52-54

The claim in the OP is just political posturing, nothing more.

It's a subject that religious zealots in both camps could play one upmanship for an eternity over.

The true people of faith live and let live and do so in humility and unselfishness.


Amen!
Only the Faithless 'belief-infested' need to do as our OP did, or those who distort science and logic, etc... to feed to their Faithless vain belief-infections!

One Xtian abortion shooting per thousands of Muslim violent atrocities in the daily news!
The proof is in the pudding.
(Riiiight, all the news sources are biased...)
And I am not excusing the Xtian persecution of atheists and gays, but Muslims do that also, no? The writings don't command that?

originally posted by: Kitana
The bible ties a Christians hands. We must purge from the church anyone who is a hypocrite and leave the judging of those outside the church to God.

Sounds wonderful in theory but in practice it does not seem to apply, to wit, Jeffery Dahmer was a Christian. Say 'hi' to him when you get to Heaven.