Twitter believes Ted Cruz is the elusive Zodiac killer, and he hasn’t denied it

In one of the greatest crime mysteries of our time, the Zodiac Killer — an infamous serial murderer active in Northern California in the 1960s and 1970s — has yet to be found. During the peak of his killing spree, the killer notoriously taunted police with coded letters and cryptograms, but he was never identified, though many were suspected.

The latest suspect? None other than Texan senator and Republican presidential candidate Ted Cruz. With a face frozen in perpetual concern, one might not easily suspect Cruz, a man who was recently labelled a “political farce” by the Chinese government.

The suspicion began in 2013, long before Cruz announced his presidential candidacy, when he made an unexpected speech at the Conservative Political Action Conference.

(Edit: added extra snippet from article)
Since then, the internet has joined forces to try to discover the truth under the helpful hashtag #ZodiacTed, digging up plenty of impossible to deny clues that suggest Cruz is the man who has evaded police for over 50 years. 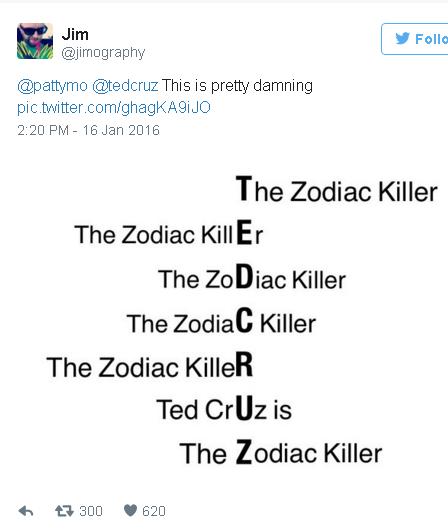 adam @burgerkrang
movie fact: bill murray whispers "ted cruz is the zodiac killer" to scarlett johansson at the end of lost in translation


Now this is something interesting yet highly speculative...so made me want to post it here in SW!

That said, never thought of that...but could be just another cover story to get TC some more publicity on the MSM and get more attention on his campaign. Don't really think, IMO, that the "whisper" has anything to do with TC at all as one twitterer claims, as that can be interpreted in many different ways.

Conversely, CNN begs to differ on this story as aired in 2014:

Man says he presents 'most evidence' that deceased dad was Zodiac Killer
www.cnn.com...

Many have claimed to know the identity of the notorious Zodiac Killer, who terrorized northern California with a trail of unresolved murders in the 1960s. But their stories have not panned out.

Now, a Louisiana man believes he has the definitive answer to the chilling mystery: Who was the crazed, elusive killer who wrote letters bragging about his conquests?

Gary Stewart says it was Earl Van Best, Jr., his biological father, who died in 1984. 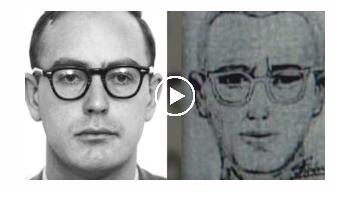 I would be more inclined to agree, not necessary believe, what CNN had presented. That said, without substantial proof, the claim that Ted was/is the Zodiac Killer (#ZodiacTed) will still remain a mystery. Thoughts?

I hate this new retarded world.

Yeah...Twitter needs some math skills, pretty sure Ted was driving a pedal car in the 60s

posted on Feb, 17 2016 @ 12:04 PM
link
Yeah, which is why I made sure this was put into Skunk Works...but then again, was also thinking Hoax, but really there was nothing to Hoax about because it was just something that never really was intended to point a finger at anyone, but stir up publicity one way or another. I think the headline was made to get more google searches for Ted Cruz and get his publicity up...that's all.

originally posted by: intrptr
Why ever would Ted Cruz bother denying something as stupid sounding as that?

My guess is that Ted wants people to talk about him....viral marketing! Then again, he has shown to us that he is a compulsive LIAR...so if he denied this, then he would be lying, right?
edit on 17-2-2016 by Skywatcher2011 because: (no reason given)

Shouldn't it be very easy to disprove based on the timings and locations of the murders and Ted Cruz's known whereabouts at those times?

I know Tia, right? Think People!
Hmm, now that I think about it,
some little kids are pretty damned smart!

posted on Feb, 17 2016 @ 12:12 PM
link
this accusation is only exceeded in stupidity by the thought that Ted Cruz would be behind it.

I hate Cruz as much as the next guy but I will defend him on this. This is so outlandish that it hurts. Lol
edit on 49216p34917 by snypwsd because: (no reason given)

originally posted by: snypwsd
a reply to: Skywatcher2011

You beat me to it! I was going to say that he started killing before he was born and carried on as a toddler...LOL!!

Retarded Non-Fact: Cruz is the man who has evaded police for over 50 years.

So according to this TC was not even born yet! LOLOLOLOLOL

posted on Feb, 17 2016 @ 12:17 PM
link
a reply to: SyxPak
Hmm, Tia, sounds too feminine for me But yes there are children that are rather smart, though children as a whole are smart not due to intelligence, but free will, thought and speech. A shame those traits are being bred out. Good to see you Syx!
edit on 17-2-2016 by Tiamat384 because: (no reason given)

originally posted by: Krazysh0t
a reply to: Skywatcher2011

He doesn't have to...sheeple will do it all by themselves!