US Marshals Are Arresting People For Not Paying Student Loans

page: 1
129
<<   2  3  4 >>
log in
join
share:
SkepticOverlord
+89 more
posted on Feb, 16 2016 @ 02:12 PM
link
In an insidious and relatively new twist in the student loan crisis, the US Marshal Service is arresting people for not paying their student loans. And sometimes, showing up with guns drawn in an overwhelming show of federal government intimidation run amok.

US Marshals arresting people for not paying their federal student loans


Paul Aker says he was arrested at his home last week for a $1500 federal student loan he received in 1987.

He says seven deputy US Marshals showed up at his home with guns and took him to federal court where he had to sign a payment plan for the 29-year-old school loan.

Federal student loans are the only form of consumer debt that cannot be dispatched through bankruptcy, and collection of defaulted loans falls to the government. While to most, it might seem like a no-brainer to have to "pay the piper" when a loan comes due, there's more to the story.

Is the Federal Government a Predatory Lender?

A predatory lender makes loans with unfair or abusive terms and conditions, where the lender coerces, induces or deceives the borrower into accepting the loan. A predatory lender may also take advantage of a borrower’s lack of understanding and lack of sophistication with regard to complicated financial transactions.

The U.S. Department of Education makes loans without regard to the borrower’s future ability to repay the debt. Federal Perkins and Stafford loans, for example, do not consider the student’s credit history. Aggregate loan limits are not based on the student’s likely income after graduation.


America earns $3 billion a year charging strapped college parents above-market interest. "It's like 'The Sopranos,' except it's the government."


As if that wasn't bad enough, student loans and the rising cost of college tuition is a scam worthy of prosecution under the Racketeer Influenced and Corrupt Organizations Act (RICO Act). Except that, in this case, the federal government is responsible and profiting from it.

Beginning in 1976, the federal government passed laws to exempt student loans from being discharged via bankruptcy within the first five years since the loan was origination. Then in 1998, the time limit was removed, making it impossible to discharge this form of consumer debt via bankruptcy.

Remember those dates, 1978 and 1998, two milestones in the creation of this financial fraud on American citizens. Now, look at this chart that shows the relative change in consumer prices since 1978. 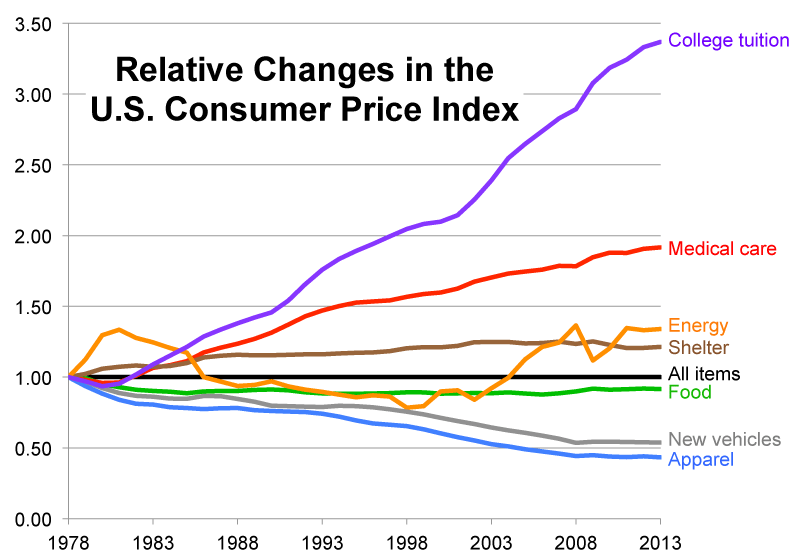 Realizing that easy money was available to students, the cost of tuition began to rise at a rate well above any other consumer expense, in lock-step with the laws protecting student loans from bankruptcy filings in the first five years. Then, a second spike after the 1998 revision to the law, removing the time frame, denying bankruptcy completely.

College tuition has risen at a rate of twice that of medical costs, and nearly 3.5 times everything else. Predatory federal loans enabled the insane rise in tuition. And now, if you can't pay, serious people with guns will be at your door.

This is your government sticking it to you. If anyone else did this, they'd be in jail.

And as someone who paid their own way through college, and still paying off my loans today. They need to change it from the current system, where the payments start 6 months after graduation.. Most kids aren't even remotely close to being on their feet by then. I was one of the lucky few, thankfully...
edit on 16-2-2016 by jhn7537 because: (no reason given)

Even here in the UK the government encouraged kids thats would have been better off in vocational trades to take bull# degrees that are pretty much worthless. Only people that win are the universitys and loan providers. The students just end up flipping burgers with massive debt.
edit on 16-2-2016 by crazyewok because: (no reason given)

Awesome practice by the government, with a bit of shyster lawyering added in for extra amazing results. Awesome precedent.

I thought debtor's prisons were illegal in the US? I guess we are returning to the olden days after all...

PS: You CAN discharge student loan debt in bankruptcy. It's just really hard and tedious.

How to Discharge Student Loans via Bankruptcy

jhn7537
+10 more
posted on Feb, 16 2016 @ 02:26 PM
link
And what's even better, good ole boy Bernie Sanders wants to give EVERY kid free college, essentially flooding the market and devaluing the degree that some of us worked our ass offfor. I was a full time student (12-18 credit hours every quarter), I worked my day job 7-5pm every day and then I did night school from 5:45 to 10pm at night 4 nights a week.. It really pisses me off that I could possibly need to pay off my loan after all that hard work, while some other kids may get it for nothing...
edit on 16-2-2016 by jhn7537 because: (no reason given)

originally posted by: Rabb420
this is exactly why furthering my education terifies me

It shouldnt terrify you.

Best decision of my life was to get a degree as its opened up so many career opportunities.

The key is choosing right.

Make sure its:
Medicine, vetinary, dentistry, chemistry, physics, biology, mathematics, engineering or if you MUST do a BA then law.

If your not smart or capable enough to do those then just dont bother with university.

I thought debtor's prisons were illegal in the US? I guess we are returning to the olden days after all...

PS: You CAN discharge student loan debt in bankruptcy. It's just really hard and tedious.

How to Discharge Student Loans via Bankruptcy

I had no idea you could do that.. I honestly thought Student Loans were one of the only loans that was bankruptcy proof...

Yea I used to believe that myself as well, but I was bouncing around the internet one day and saw an article about popular myths that aren't true. This was one of them.

Clearly, I see where the myth comes from, because it ISN'T easy either.

posted on Feb, 16 2016 @ 02:32 PM
link
Well if we follow government boot licker logic...them's terrorists. Everyone of them should be lined up and shot for not following the rules! Gas 'em all. Execute them on live tv to make all others fall in line. Don't dare blame the government. That will make you a terrorist too. Resistance is futile!

originally posted by: Rabb420
this is exactly why furthering my education terifies me

You could get a free education in one of those horrible social democracy countries...

Skid Mark
+1 more
posted on Feb, 16 2016 @ 02:35 PM
link
a reply to: SkepticOverlord
It sounds like loansharking. They even have thugs to bust down your door.

I'm convinced SkepticO could start a thread with just him releasing a single fart and within 20 minutes that thread would be top story on ATS!! U got thread skills, my man! haha

And honestly, wonderful topic... this is scary to think, especially with the looming student loans bubble hanging over this countries head... If that bubble burst, you gotta wonder what the true/real ramifications will be? Worse than 2008 crash? I wonder... And similar to what Krazyshot asked, I thought debtors prisons were illegal...

Are these arrests possibly a way of them trying to stop the bubble from bursting?? If people believe they'll be arrested for not paying back their student loans, that will be one of the first bills lots of people will look to cover each month..

But what are those degrees worth?

Most employers in the UK will bin a CV if the degree came from some of these free European universitys. Its likely the same in the USA.

Well, as a person who has hiring powers for his employer, when looking at a resume, I try to key in on the experience first, but if two candidates have similar experience background, then I move to their education. Better education wins. Which is why people should NEVER give money to online universities like University of Phoenix or crap degrees like that. If you are going to spend the money, then go to a reputable school with a respected network to help you navigate around, because more times that not, its not what you know, but who you know, so undergrad/post grad network can be very handy today.