Countries America cannot or will not invade. Reasons.

posted on Feb, 11 2016 @ 10:55 PM
link
US had been known to be in the alliance(Allies, WW2). The Alliance of the past may no longer exists today. Seeing how US keeps creating massive wars all over the world.

After WW2 US didn't have enough man power to invade China. They were also too busy Nazi hunting. US were more afraid of Soviet Union Invasion of Europe, so they decide to help China to be a buffer zone on the East(as China had been neutral since the Cold War). If US had invaded China it would've been a continuation of WW2 without Nazi or Japanese faction being around. This would Cost US a lot of man power allow Soviet Union to come straight in, taking over everything as US waste more men against China. China today is like a Hyper Power. Invading China is the worst idea ever, especially, when they are way more peaceful than the rest of the world combine not interfering with foreign affairs. The only true Asian power stopping Indian race and Russians from grabbing all the lands of Asia.

After a ceasefire US currently did not invade again due to Chinese support. Making NK a buffer zone to Western doctrine. To this day they are still being protected, unless NK decides to invade SK which they had not yet. China will only side with NK if they get invaded not the other way around. Invading NK will not be like Iraq either. NK is more technological advance than Iraq and possibly have Chinese weapons to support.

Iraq and Iran had been known enemies(check Iraq-Iran war). Invading Iran will prove that US is attempting to conquer the Middle East. Iran is technological more advanced than Iraq. Especially since US sold F-14's to Iran. While Iraq had outdated weapons from the old Soviet Union. Iran has a lot of alliances around the world including NK.

Do I have to say anything? One of the biggest population on Earth? India is part of the Allies in WW2. It became neutral after it freed itself from Britain. US is trying to get India to join in with all the fights. But, India is not so dumb after all.

A second Vietnam will drag them back to China for help. Why would you want another Vietnam problem?
Vietnam has ties with China.

Right between Russia and China. Cannot be touched without getting the other two superpowers involved. It is their influence.

There is India doing all the work for them. Pakistan and India dislike each other.

Part of NATO alliance. Majority of the European countries are super advanced. Why would US be the bad guy to them? They need them to block Russia.

Part of UN. Invading South Africa is a very dumb reason to drag everyone against you.

Yes, I said it. Canada has a small army. Another reason to drag everyone against you. Until then Americans can only dream of taking over Canada.
Without other countries around America could just send soldiers into Canada and there would be very little resistance. Canada doesn't have a huge army to combat US since the 1812.

A great buffer zone to South America. Mostly influenced by US. Mexico is still a neutral country to US. Unless US wants its population to do civil war internally. I doubt you see US invading Mexico any time. They can switch alliances anytime with possibly Cuba. Different race. Harder to takeover unlike Canada.


I'm not going to talk about those tiny countries, especially, those fake western influence ones in South America or tiny islands like Hawaii. US already owns them. No way you see them having their own army of defense. The ones that are free. They will get invaded once the big players are gone.

Cool information otherwise, but I'm not quite sure the accuracy behind some of those reasons.
edit on 11/2/16 by Ghost147 because: (no reason given)

Because even America isn't immune to Armageddon

It's a really really long way to go ... Too far IMVHO ... and China might already have dibs.

13. Australia It's a really really long way to go ... Too far IMVHO ... and China might already have dibs.


Not to mention that everything there can kill you.
edit on 11-2-2016 by Skid Mark because: (no reason given)

posted on Feb, 11 2016 @ 11:13 PM
link
We wont invade Vietnam but WE are returning to the bases there and on the Philippines.
Apparently the joint chiefs disagree with your assessment of China,as does everyone who has any form of military training.
Warfare has changed thinking the next war will be fought like the last is incorrect.We also NEVER invade alone unless it's in the black.
The "Pivot" is already seeing forward placement of equipment ,aircraft
canada ,and the UK get dragged along with us usually(Thanks guys)
You see we are already cruising passed China's sea grab.

Are you yanks gonna put up with this crap from these weak-assed Kiwi's?
It appears New Zealand may need some mega-freedoms of democracy America. 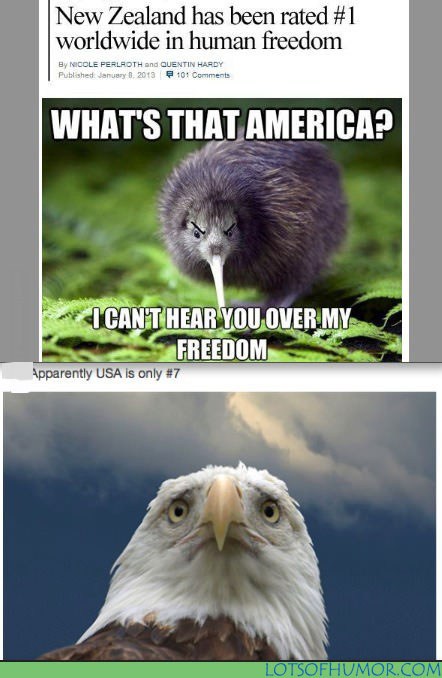 India, Japan and the US are a part of the trilateral to contain China. So of course they are invading India, and Vietnam is junior member of this group (along with Myanmar, Philippines, and Taiwan) who hate China, it does not have ties to China.

Everybody is a member of the UN that has never stop an invasion. South Africa is part of the African Union which has a series of defense cooperation agreements with NATO. So again the US has not reason to invade a friendly state that supports it. Same with Pakistan, Mongolia (even sent troops to Iraq), Canada and Mexico.

I think remembering who US allies are would make this easier. The US has three multi nation military alliances where an attack on one is an attack on all.

Through many other defense agreements the US has basing, over flight, supply rights with most the Caribbean states. most of Africa, Israel, Jordan, Saudi Arabia and the gulf states, Sweden, Finland, Thailand, Singapore, Brunei, Malaysia, Indonesia, and Taiwan. With offers from Vietnam and Myanmar. India, Japan and the US have defense cooperation agreements.

So the US close defense to about 100 nations. None of them would be invaded by the US for obvious reasons.

Who cares, and their oil is good too

All the smart people in India are actually in America, don't think this would ever happen.

India will do it for us

9. South Africa
OK then what? That is my point there is no then what...hehe

The only thing more powerful than the drug cartel is the tourist cartel...

Which of the other 50 provinces of southern Canada do you reside ?


Good point, thanks for that.

Why did OUR GOVT offer them nothing more than a 20 year lease? Where do their loyalties lie???????

Why do we have let foreign countries own our land in order to trade with us?

Ahhhh but 'well, dum bumb, they cant take the land away with them can they so wheres the problem ?"

Long terms leases are secure, Australian stations are all leases and been that way for a hundred years.


You sent us Justin Bieber, YOU fired the first shot

they have economic relations with all them . Why would they invade? Many have secret ah bhms. Or backing by countries that have them. And mexico, well they have montizumas revenge to protect them from anyone wanting to take over.

originally posted by: makemap
After WW2 US didn't have enough man power to invade China.


Immediately after WW2 the U.S. had no cause to invade China, because China was one of the friendly countries.
The regime of Chiang Kai-Shek was one of the allies being supported by the Americans against Japan. That's how China got its permanent place on the Security Council of the U.N., as one of the "victor" nations in WW2.
Whereas Mao-Tse-Tung was just the leader of a localised Communist rebellion.
The two sides fought it out after the main war was over. Only at the end of 1949 was the pre-communist regime driven out of mainland China and into Taiwan, though they held onto the Security Council seat for a few decades.