Soros Made $1 Billion Profit Short Sale on Black Wednesday - But what is a "short"?

posted on Feb, 11 2016 @ 08:21 AM
link
No, that was not a catchy title to draw you in to a thread explaining what short selling is in the finance world - I literally don't understand it and I'm asking.

I'm asking because, as many people know, George Soros is one of the richest people on the planet, and after reading his Wiki page, I found that he made something to the tune of $1 billion off of a short sale back in the early 90's, during the "Black Wednesday UK Crisis":


He is known as "The Man Who Broke the Bank of England" because of his short sale of US$10 billion worth of pounds, making him a profit of $1 billion during the 1992 Black Wednesday UK currency crisis.[8][9][10] Soros is one of the 30 richest people in the world.[11]

I wanted to try to figure out what a short is, remember that movie 'The Big Short" about the '08 financial crisis? Were the bailouts a "short sale" for someone as well? Wiki on Short Selling: Wiki

Even with this handy-dandy diagram I can't quite envision how this works. 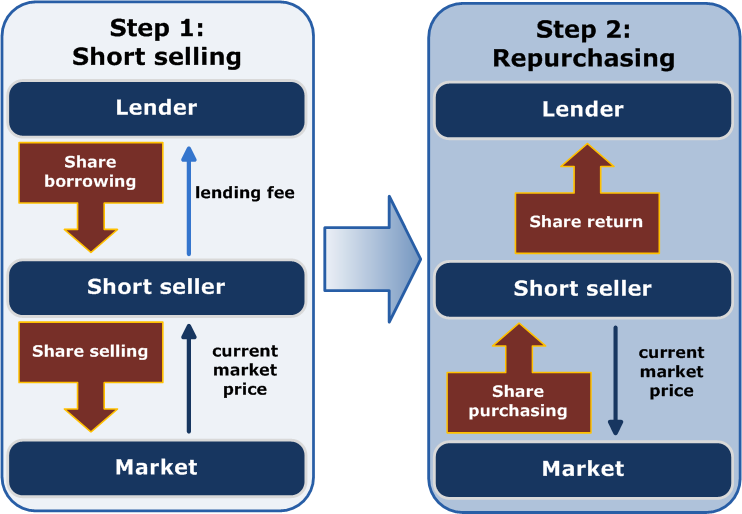 Can anyone help? Thanks everyone in advance, looking forward to learning something new and talking about these tricky little money games

P.S. I also need to do some more reading on Black Wednesday. If any of our members from UK can provide any personal comments about that event that too would be a great addition to the thread.

That is a terrible diagram. Let me see if I can find a better one.

Edit: Here you go, this one explains it nicely: 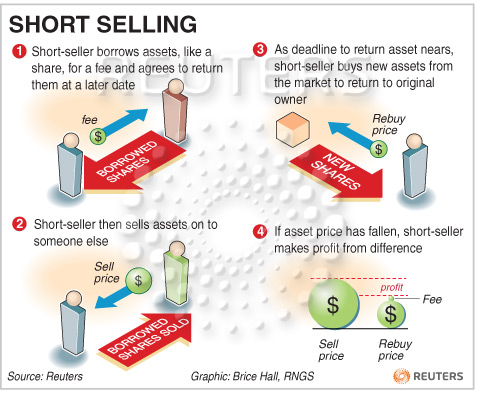 The trick is that you only do this when you feel certain that the price of the particular stock will fall.

Essentially it is a bet the the price will drop - if it rises, you are screwed (or at least then you loose money), 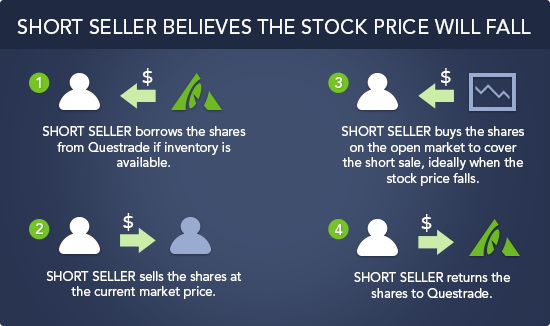 That makes a lot more sense.

You are quiet there.

The short seller borrows shares for a short time span. He sells it and pays the lender a fee. Then he re-buys the shares on the market and can give back the shares to the lender.

Visual example: Little Billy knows somebody who pays 10 $ for 50 sweets. So he asks Little Bobby, who always has tons of sweets. Bobby lends Billy the sweets, but asks 50 Cent for the deal, when Billy has sold the sweets. Also Bobby wants back his sweets next week.
Billy is lucky. The guy who bought the sweets from him tried to sell them to his classmates, but could not sell one at all. Billy offers him 8 $ and he agrees. So Billy can give back the sweets to Bobby and made 1.50 $.

Of course, Sorro can buy many more sweets... And Billy also could have had bad luck, when the prices would have gone up instead of down.

Good point. Options leave you less exposed by limiting the risk. Short selling has a potentially bigger upside, but if you lose, you could lose really, catastrophically big. Now let's talk derivatives.

To me he made money of falling market currency

posted on Feb, 11 2016 @ 10:09 AM
link
If I could make one regulatory change to the financial world, it would be to ban short selling across all global markets.

This is why traders make a ton of money. You are playing with a lot of money trying to read the tea leaves as to which way the markets will move. Only the best seem to be able to do it with any degree of longevity and investors are willing to pay for the outsized returns above the broader market.

I think a more dangerous concern is the derivatives market. Even back in 2010 it was estimated to be worth a whopping $1.2 quadrillion. entirely based on "betting" on the performance of an underlying entity.

In my head I picture a giant house of cards, but maybe I'm not well-enough versed in economics/finance for this concern to be legitimized.


Investopia on Derivatives
edit on 11-2-2016 by FamCore because: (no reason given)

posted on Feb, 11 2016 @ 11:35 AM
link
In simple term, a short is when you borrow someone's stock and sell it. Later when the stock drops in prices, you get that money since the owner never sold it?

posted on Feb, 11 2016 @ 01:15 PM
link
All this financial stuff befuddles me. It seems to me this is just a multi-quadrillion dollar casino, played with Monopoly money. Let me see if I understand this.

So the general refrain in the stock market is:
- Buy Low
- Sell High

And the way these Traders make money on this is by predicting which way the stock market moves.

Now I've heard that, these days, the stock market is moving in a manner that is not only completely contrary to the fundamentals, but contrary to common sense as well.

So, in order to be successful the Trader has to be able to successfully read the Tea Leaves, Tarot Cards, Runes, Crystal Ball, Chicken Bones, and Goat Entrails.

Ok. Doesn't sound like it would be a good line of work for me.

Actually the big money isn't made with prediction, that's for suckers. It's made with manipulation and inside info. But don't tell anybody, the world's economy depends on it.

The trick is that you only do this when you feel certain that the price of the particular stock will fall.

Such as when you have the ability to make the stock fall with your selling of it.

Yeahright seems to have a damn good grasp of the commodities market. It's not a simple thing to get and I commend either the diligence in researching or the teacher for getting it across. I'd say that while manipulation has become the order of the day with the rise of the super-rich, there is still room to be made in making reasonable decisions based on market history. Of course the more manipulation gets involved the less honest traders can get dependable results from market history. Before long all history will be moot as volatility is driven by the decision-makers and their friends. It's become a dark and dangerous time for any honest commodities investor.

I think it's important to know for those that see it as a big scam though, that originally the commodity market did have a legitimate purpose. When you produce a commodity like pork bellies or heads of cattle or corn there was never certainty that you could get current market value for the finished product at a later date. Commodities markets allowed producers to hedge their production on current market value. So, farmer John could lock in a price in December for his corn that would be harvested at a later date. It's a hedge. Hedging your product for current price because the market allowed somebody to promise that price at a later date.

If you want to get into the dynamics of how short sales are necessary to keep this system afloat you would have to take a course or study it. It can't be explained in a post. Ultimately it's about people assuming the risk that farmer John wanted to avoid and betting on either an increase or decrease in market value over time. Sadly it's becoming a rigged game.