posted on Feb, 11 2016 @ 06:13 AM
link
This thread is right in time for Valentine's day (only three days left!), and uncovers something in my opinion quite fascinating: courtship has existed for a very long time. Very long.
As in, a hundred million years.

Evidences have been found that male theropods (a major family of dinosaur species which includes Tyrannosaurus Rex) have displayed their skills to females by digging great holes into the ground and thus show off their ability to build nests for their partner.

The structures, which date back to the Cretaceous, are comprised of raised earth ridges flanked by parallel troughs, and a type of dinosaur is thought to have dug them in order to catch the attention of females.

they must be signs of sexual displays. Unlike nests, which are usually similar and evenly spaced, these mounds and troughs were irregular in size and spread out in an uneven pattern. Nor was there any of the usual fossil evidence of young, such as eggshells.

Which makes me only wonder how much genetic memories (expressed or not) have we inherited from the prehistoric world.

posted on Feb, 11 2016 @ 06:19 AM
link
"they must be signs of sexual displays" - well, phew. You wouldn't want something the size of a dinosaur jumping you without a bit of warning. Even if you were another dinosaur

More seriously, thanks for posting a very interesting article.

posted on Feb, 11 2016 @ 06:29 AM
link
How they obtain such knowledge by looking at some dirt is beyond me
Very bold claims of how animals lived +65 million years ago.

They must do a lot of thinking, which is the good part i guess
edit on 11-2-2016 by intergalactic fire because: (no reason given)

posted on Feb, 11 2016 @ 06:34 AM
link
That must be why they died out then, all the males eventually suffered from a reptile dysfunction. 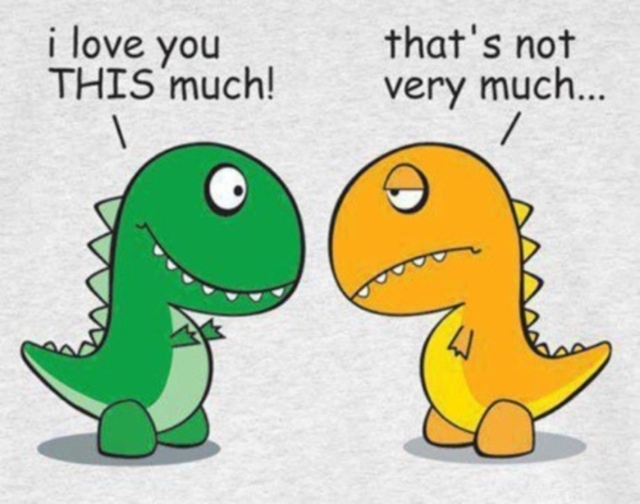 posted on Feb, 11 2016 @ 07:14 AM
link
I like how scientists or whoever just make # up. In all reality they have no idea how dinosaurs acted or what they did. For all we know they could have been magicians, look how they all disappeared.
edit on 11-2-2016 by Bovah2 because: (no reason given)

posted on Feb, 11 2016 @ 07:24 AM
link
From the pic of the 'impressions' it looks like something stood there in soft mud for awhile, for whatever reason.

How come theres no prints around those two impressions, did it fly away?

The things are over 65 millions old. The footprint probably just eroded away, whereas the holes (deeper than the footprints) were harder to erode.

Analogy: a pebble in a river will eventually get carried by the current, but an island will take longer (much longer) to do so.

The (im)prints would have eroded somewhat, too. Those toe marks are crisp.

Edit: If this was 'rutting' behavior, there should be lots of prints, scuffs and dig marks around there, just two means standing behavior. See the brush marks between them, thats a birds tail feathers. Flapping its wings, preening itself, maybe sleeping there, then flying off.

A little less subjective than however they came up with their idea.

originally posted by: intrptr
Those toe marks are crisp.


You call this imprint "crisp"? 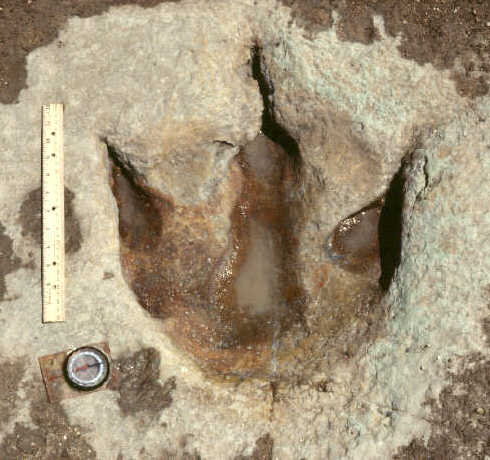 posted on Feb, 11 2016 @ 07:40 AM
link
Well we know they mated and have found female skeleton fossils with repeated broken/healed tail vertebrae which is supposed proof of being mounted by the larger and more aggressive males so this find shouldn't be that surprising.

Reminds me of the lengths some modern bird species males go to to attract that special gal.

In the photo provided in the link look close at the left impression, there are crisp toe marks at the top of it…

Your photo is one foot print of something walking. The OP article is something standing for a while. Both in soft mud, by the way.

originally posted by: intrptr
a reply to: swanne

In the photo provided in the link look close at the left impression, there are crisp toe marks at the top of it…

There are multiple claw marks (partially eroded), made with efforts (and repeatedly) so to purposefully dig out dirt. Of course it'll be more visible than an imprint by the same animal simply walking.

Dogs can dig hole, that doesn't mean that their feet make holes when they walk.

Imagine what 20+ generations of constant brainwashing and mind-limiting cultures must have done to humanity genes pool?

Habits, emotions, fears, traumas, preferences, strong emotions, addictions, false beliefs, all of them are transmitted and can and will manifest themselves in any number of ways.

Kali yuga ftw. You dont make a more ignorant population than the modern one. Science has only been rediscovering what was already known before in a more perfect and complete way, from various advanced civilizations in near or far past. But since science is but a thread held by the puppeteers, they can and did push it towards a dead end by endorsing materialism to the extreme, silencing anyone that would stumble by chance/hard work on concepts and ideas potentially destructive for the current matrix (rife, free energy, ayurveda, magnetism,..) refuting spirituality which is the key component science needs to TRULY explain everything. Science without wisdom is artificial and limited. Hence why the world is in this #ty state.

About dinosaurs, i already assumed that much. If modern animals have courtships so did others species millions years back. Dont need science for that. But many love empty efforts just to make a useless point...

The impressions are eroded some (duh), they represent a two legged animal standing, with its belly or tail brush marks between the impressions.

Just like the twin impressions of a bird standing in one place in here (center, right)…


You should take a course in tracking… helps to identify animals and their behavior.

Imo, thats a birds resting place. Big one, too.

Ugh, I would have never guessed that one day I'd be arguing about courtship footprints from theropod dinosaurs.

The dinosaur was not standing still, it was actively digging dirt. The multiple claw marks prove it. Your argument implies that the dinosaur had a ludicrous amount of claws on its feet. Plus, the scratches between the two feet-dug holes are not from its tail - tail mark would be located behind the feet marks, not between them. The scratches in the middle were probably made with its front legs' claws (its "hands"). They were less powerful than its feet though, and this explains why the scratches at the center are less deep than the feet-dug holes.

Ugh, I would have never guessed that one day I'd be arguing about courtship footprints from theropod dinosaurs.


Thats a given. All critters court.

Whats not given is what this photo represents. You're arguing from their conclusion its 'courting behavior'.

How is that determined again?