As much as the derogatory and filth that is coming out of his pie hole, America is taking Trump more serious than the good old fashion polished poli-trick-eris that have been wasting our time and money for decades.

If Bernie continues to gain momentum, it will be interesting to follow.


Many Republican Party leaders may be terrified by Trump’s ascendance, but have yet to divine a way to stop the billionaire real estate mogul.

The current and former chiefs of the state Republican Party condemned him. New Hampshire’s only two Republican members of Congress refused to endorse him. The conservative owner of the state’s largest newspaper called him “a con man” on the front page.

So, too, did Bernie Sanders, who will leave New Hampshire with the commanding victory one might expect of a front-runner blessed with the near universal favor of his party. Except all that establishment support belongs to Hillary Clinton

posted on Feb, 10 2016 @ 06:42 AM
link
Kasich blew his wad in New Hampshire and the best he could do was half Trump's total. He did succeed in a narrow win over Cruz, the other non-establishment candidate.

Thing is Trump is eating up the traditional GOP voter base in large numbers. The establishment has to figure out how to woo their own base back if they want to win. Trump isn't being bolstered by the TEA Party or evangelicals. Those voters are going to others candidates.
edit on 10-2-2016 by ketsuko because: (no reason given)

posted on Feb, 10 2016 @ 06:48 AM
link
If anything positive comes from this election, it will be that D.C. knows the people are fed up with the same old screw the people mentality. The problem is the establishment will just start polishing their candidates with a new brand. Guess we better choose right this time or there may be no hope for real change in the future.

It is so satisfying seeing and hearing the Grand Old Party establishment go into meltdown over Trumps enigmatic success with US citizens.

Clearly US politics has reached a crisis point...for the establishment and no matter what the propaganda machine churns out, the people are speaking out.

Take this front page from one of the rags for instance stating that all Trump supporters are mindless zombies - LOL, are they butthurt or what?? 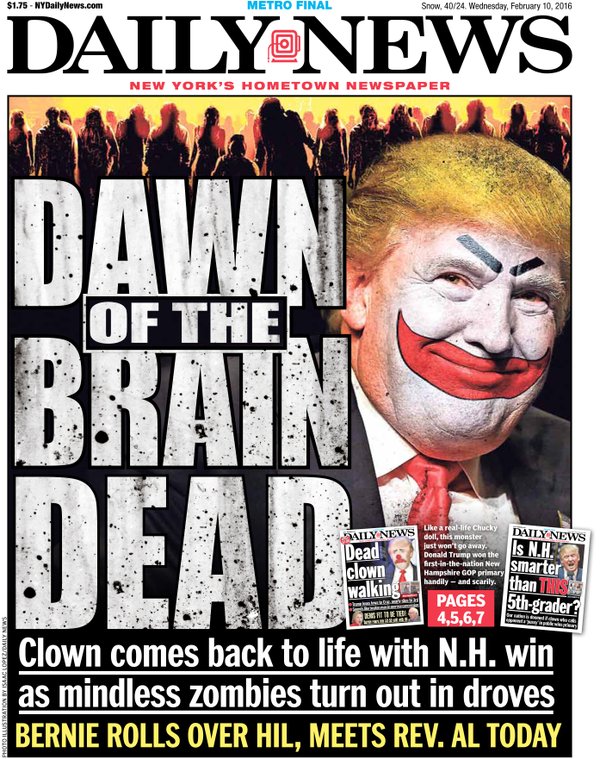 The press has lost all credibility with most of the democrat base as well. They don't get why people are angry, sick, broke and frustrated.

I reckon Trump is gonna win...

Its not rocket science (sure political science it is hehe) and i admit i know next to nothing technically about politics, but this specifically is just too surreal from my perception back across the pond.... like ive said previously - Its not 'what' is being said, or 'who' is saying it.... it is 'how' it is being said!

IMO, Trump is the only one that uses the shock n awe tactic, not beating behind the bush or trying to use gentle PC words... unfortunately, this is what gains momentum these days (not only in the political arena, mind you)!

If you thought GW Bush was funny, you aint seen nothing yet. If Trump does become president, it will be one hell of a comedy show (pun intended), probably end in a nuclear war... at least we will go out laughing!

Or... maybe he will make america great again?

They are indeed slightly butthurt.... 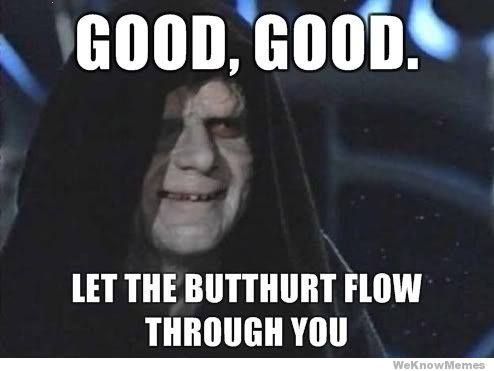 I enjoyed watching the Trump/Sanders win last night for the exact same reason. They have continued to underestimate both candidates and are visibly angry (just read the Huffpo headlines) that they were wrong yet again. The fact that so many MSM outlets are really coming right out and being nasty (especially where Trump is concerned) is showing their true colors. Headlines like that would have never come out for any other candidate and it only serves to fuel his base. They are not learning their lesson, thus he continues to get tons of free media coverage where others have to pay a pretty penny for a quarter of the coverage he gets.

This race may just hit new lows and that's not an easy thing to do where politics is concerned.
edit on 2/10/2016 by Kangaruex4Ewe because: (no reason given)

posted on Feb, 10 2016 @ 07:05 AM
link
Trump won with nearly every important demographic and every Republican sub-section...not to mention attracting large numbers of independents.

Cars were lined up for miles to get to the voting locations (in large part for Trump and for Sanders combined).

Trump's unscripted remarks and occasional profanities aside (yes, he said the "p" word...facetiously scolded the person in the audience for using the word in reference to Cruz, and then answered somebody else in the crowd as to what had been said...the word use, though, was not in direct reference to a female body part, but the common use referring to someone as being weak), people need to wake up to the fact that Trump is appealing to millions of Americans because they feel he is strong enough to:

1) stand up to, and not be influenced by the Lobbies
2) put a stop to illegal immigration
3) reverse the disastrous effects of "Free Trade" deals that have decimated America's manufacturing sector (and thus the Middle Class)...and bring back jobs to America
4) strengthen the military - and use it to stomp out ISIS and other organized Islamic terror/crime syndicates
5) protect American's 2nd Amendment rights
6) reform the Tax system, and reverse the scourge of ever-increasing deficits and public debt

If he wins in South Carolina...and then in Nevada...I think people are going to have to start to understand that Trump, unconventional and uncouth as he is at times, could well be the Republican nominee.

And with the Democratic Party in total disarray...Clinton on the ropes against a self-proclaimed Socialist who wants to win by promising "free" everything to the masses, and the "coronated one" facing possible indictment during the campaign - dare I say, the Donald may well be ordering new drapes for the White House come November.

posted on Feb, 10 2016 @ 07:09 AM
link
I think it may be that people just like what Trump is saying. All the others are career politicians and folks are just fed up with that. I'm not saying Trump is the best choice, but neither is Bernie. There is no "best choice" this time. Or last time. Or the time before that.

That should be the death certificate for any political candidate. Any one who would use that race baiting POS to get votes has shown his true colors. May as well just go ahead and make a deal with the Devil.

posted on Feb, 10 2016 @ 07:10 AM
link
Trump is not going to win. It's all just puppets on powerful strings. The string pullers will never allow this. Think "miracle" primary wins for Bush. Think contested convention. Think election 2000. Or, since this election cycle has been so dramatic and surprising, think Bloomberg.

Combat, I'm with you on this.

Don't discount the powerful subtext of that Daily News cover. It's his hometown paper, in the power center of the world - NYC - lampooning him in the most unflattering and, really, HATEFUL way.

I don't post (nor really have posted much) at all these days but I agree with you on many things I read, actually starred a few of your posts this morning in a couple different threads.. I'm a tired, single, no kids working man who has been taxed to death since I was 16 years old.. I'm sick to my stomach and over any of these politicians. Will we the people ever really be free? Trump this, Hilary that, Bernie everywhere, finger pointing and nothing but round about discussions of it all where no side really wins except with their own lies to me as a working man.

I feel the "elite" are afraid of Trump, I would like for him to shake it up a bit. Of course they will brand him as a clown that's what they do best in a circus! Will he help me being taxed to death? Probably not but atleast he will make it interesting..

Just goes to show ya how much of a joke the political establishment is when a clown like Trump leads them.

If it's Trump vs Sanders it will be interesting indeed.

posted on Feb, 10 2016 @ 07:43 AM
link
"He will never get the nomination" I have heard that about BERNIE AND TRUMP SINCE DAY ONE, Bill Oreilly said it a hundred times about both, Romney said it and that's one reason I am glad to see both of them win.

posted on Feb, 10 2016 @ 07:44 AM
link
Trumps no Gump! And it appears that folk appreciate the no nonsense speak your mind approach like its a breath of fresh air. And you know how good fresh air is for everything!

I think that what's been keeping Trump in the game has been (oddly enough) people assuming that he's about to self-combust and drop out. Cruz spent ages not criticising Trumpster in the hope that he could get hold of Trumps voters when he eventually went too far and saw his poll numbers collapse. Rubio, Christie and Bush are all (just about) still in because they are all hoping that Trumpster will implode. The irony is that by clinging on they are splitting the anti-Trump majority and making it easier for the bloviating buffoon to stay in the game.
Once Christie and probably Bush fall out in the next few days or weeks then we might see the dynamics shift again.

originally posted by: RP2SticksOfDynamite
Trumps no Gump! And it appears that folk appreciate the no nonsense speak your mind approach like its a breath of fresh air. And you know how good fresh air is for everything!