There's an image making the rounds and I hadn't seen it posted to ATS yet that and I know how ATSers love interesting Mars photos! According to the always reliable Daily Express (slightly better than a YouTube video Daily Express?), the image is from January 29th of this year. Rather than embedding the cropped, zoomed and marked up image, I retrieved the original image from mars.jpl.nasa.gov/msl-raw-images/proj/msl/redops/ods/surface/sol/01237/opgs/edr/ncam/NLB_507300229EDR_F0521162NCAM00322M_.jpg (looks like the URL is too long to link). 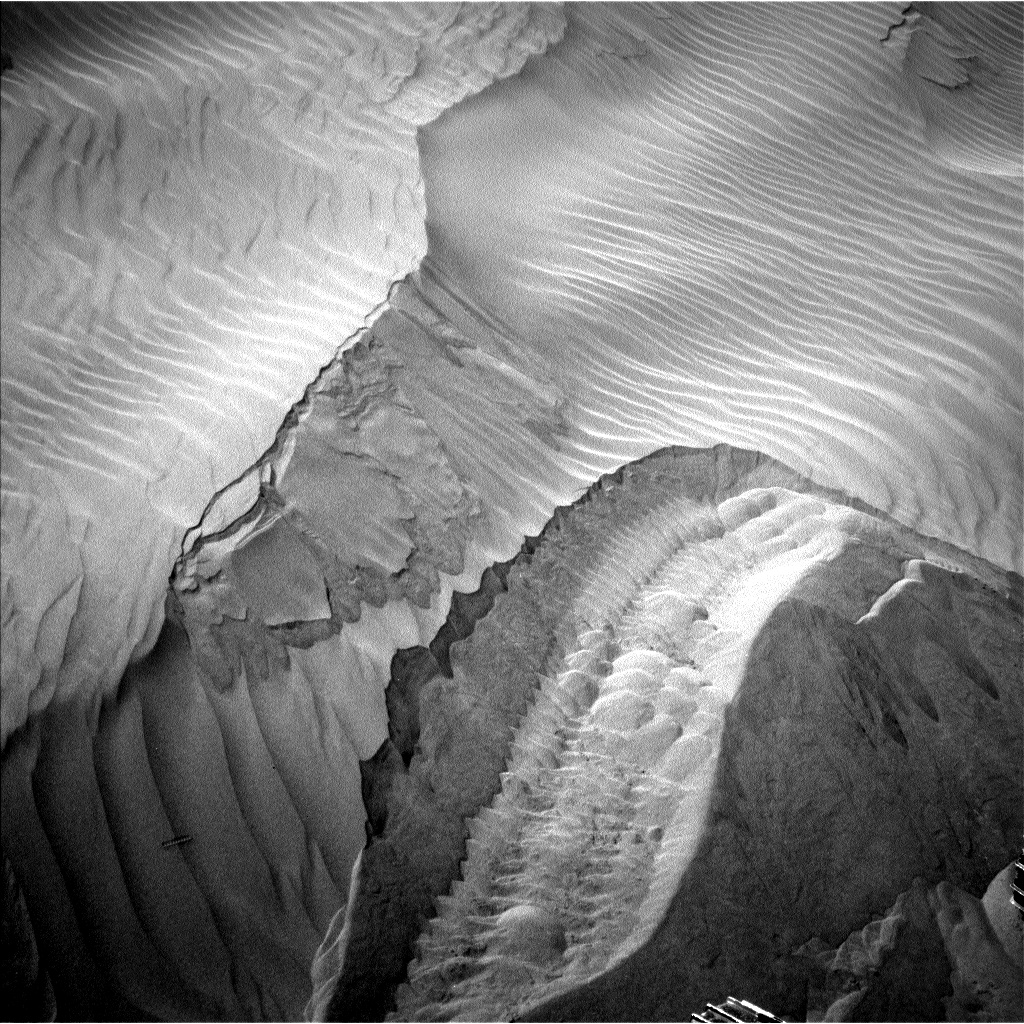 The feature in question is in the bottom left of the image. It appears to have 10 segments of roughly equal size — whatever that size may be — lacking any scale, I don't even want to hazard a guess.

For the truly lazy, here's the feature cropped and scaled to 300%: 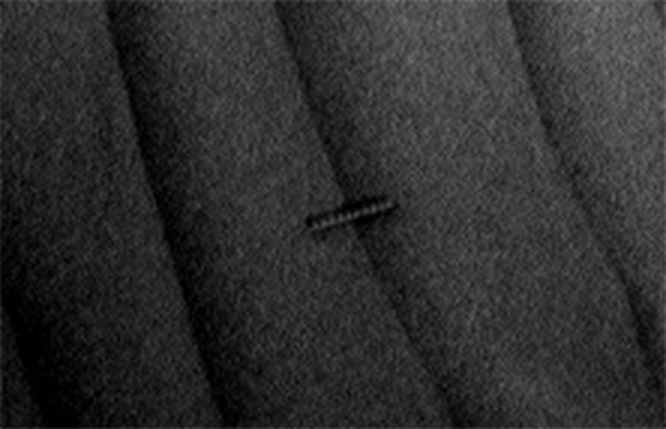 posted on Feb, 9 2016 @ 11:14 AM
link
Huh... for a second I thought we were looking at a satellite view, but It looks like that's the rovers wheels in the bottom right corner, So I guess this is just a picture of the ground taken from the rover? If thats the case this object would only be a few inches long, I wonder if it's just something that popped off the rover.

or as you say a worm. It could also be a twisted rock thingy

Maybe the rover is falling apart ?

Agreed — whatever it is, it appears to be on the order of inches, not feet (I doubt they'd drive Curiosity to the edge of a sandy precipice).
edit on 2016-2-9 by theantediluvian because: (no reason given)

timestamps differ 5 minutes in these two images...and I'm not sure if it's the same area but from a different angle.


the feature is apparently caught with both nav cams (right and left). That excludes camera glitches or smudges.
edit on 9-2-2016 by MarioOnTheFly because: (no reason given)

I should have been clearer — I'm not suggesting it's actually a worm — that's how the folks at the Daily Express and other sites are describing it (also it works better for the Dune reference).

I'm completely undecided but it is an interesting picture.


I'm completely undecided but it is an interesting picture.

highly interesting. Whatever it is...it sticks out and is unusual in formation. By being spotted with both Navcams...it is confirmed as real. No image artifact.

I can't possibly conclude anything of it, but it is definitely an oddity, and it certainly doesn't seem like any sort of rock.

posted on Feb, 9 2016 @ 12:14 PM
link
i suppose the question to ask is, does this caterpillar shape show a uniformity to the terrain its on indicating it is something bendy climbing over the dune, or just some artifact of darker and lighter areas. Surprisingly to me, it looks like the former, but there's no telling.
For Mario, it does seem to be the same area.

This is the picture lightened a little, outlined in red in the same orientation as the OP's picture, but a different angle, head on). Use the link to zoom in. 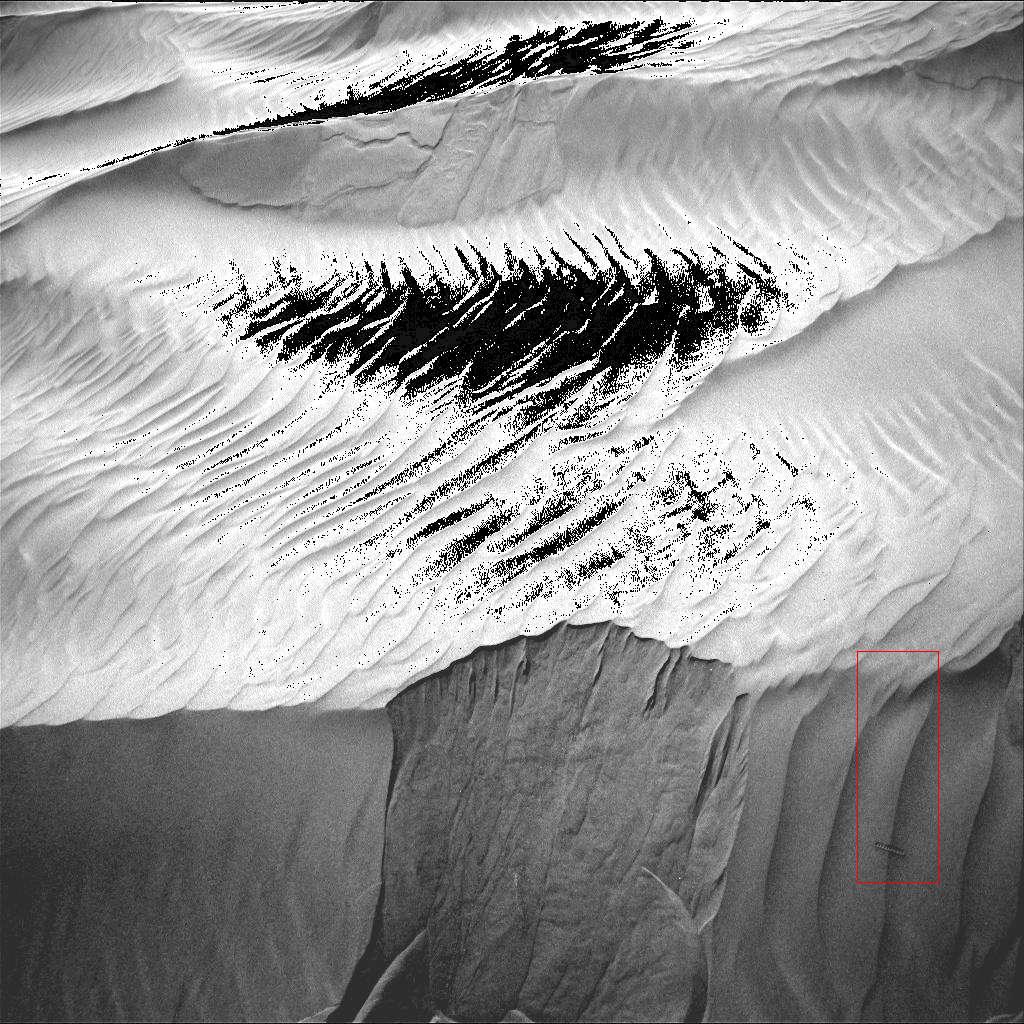 Here's the OP's orginal picture, the orientation of the object is the same, shown in the whitebox, just from a different angle, (side on looking from the left). The Op's blowup seems to have been flipped by the Express..whatever. Use the link to zoom in. 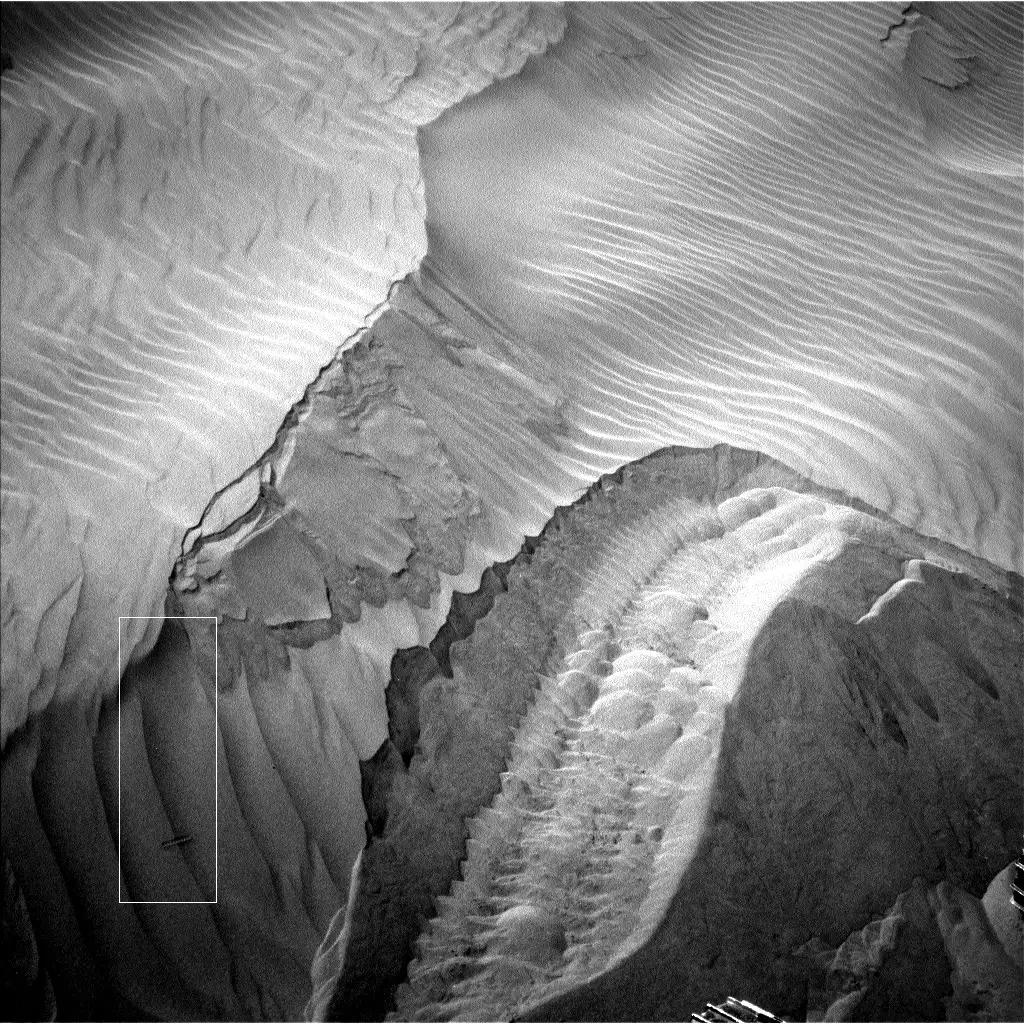 originally posted by: JasonZeroZero5
By the shadows, it sort of looks like an indentation to me.

I don't think it's a depression judging by the shadows. If it were, I'd expect it to conform to the dune's surface and be darker in the middle where it spans the crevice (for lack of a better term).

I think we can rule out image/processing artifact as MarioOnTheFly pointed out above, it appears in a second image from a different camera.

I don't think it's a depression judging by the shadows. If it were, I'd expect it to conform to the dune's surface and be darker in the middle where it spans the crevice (for lack of a better term).


It does appear a little darker in the middle in your first picture though.
My main thrust would be something belonging to Curiosity than has come off and happens to be regular in it's shape, like a spiral grub screw, from that point of view there even looks to be a tiny plate with a hole or two holes in it just below.
The most likely thing to fall off though is yet more material off the tracked wheels.

Discussed by this graphic artist who dabbles in Mars anomalies. He's better than most but I take it all with a grain of salt.

posted on Feb, 9 2016 @ 02:14 PM
link
If its a screw (threaded object) it was extremely poorly made as the spacing is not even, it would lock up the moment it was wound into a thread.
If its from the rover it might be some sort of rubbery plug/seal, but I doubt they'd use something squishy on a freezing cold planet.