posted on Feb, 9 2016 @ 02:21 AM
link
This is just now breaking on CNN but there's a limited amount of info available. Hopefully this was just a bad accident and not a terrorist attack.


Two trains collided Tuesday morning in southern Germany, the South Bavarian Police said. There are fatalities, but the number of dead so far is unknown. The trains were traveling between Holzkirchen and Rosenheim in the state of Bavaria. Up to 100 are injured, eight critically, according to police. The reason for the crash is not yet known and rescue workers are at the scene.

Just Yesterday German Chancellor Angela Merkel, was in the Turkish capital for talks on how to reduce the influx of refugees into Europe.
www.aljazeera.com...

All World Leaders have their Masters and Consequences for not following orders.

Can only think due to the time of day 07:00am that the trains would be fairly full with commuters. Looks as if one train has derailed.


Hard to believe with the fail safe and sensors in place on European rail networks that something like this could happen..

As its two trains colliding let hope its a genuine accident, although you raise a very good point and everyone is so alerted to terrorist attacks from the depraved that it will be on many people's minds.

Common sense says it would be easier to provide a safe place away from the fighting for refugees in Syria itself with decent facilities until people can return once peace is declared. That has to be the cheaper option and one that wouldn't cause the anguish for people trying to make a dash with kids in tow to the West where they can't all be guaranteed work in any case.

posted on Feb, 9 2016 @ 02:57 AM
link
With there being two trains implicated I would think this more likely to be an accident than some terrorist plan. I would imagine causing a derailment at the precise time two trains are so close would be extremely difficult to achieve.

RIP to those who lost their lives and let us hope that the casualties are as few as possible under the circumstances.

Given that this is a head on collision, there are only two ways I can think of, that this could have occurred.

First, both trains were switched to the same track in error/due to a signalling fault/software problem in any automated system of signalling or switching.

Second, the train on one set of tracks hit an imperfection in the track, or debris across the track at significant speed, and derailed into the oncoming train on the other side of the track.

In either case, the situation looks dire. With a hundred injured, eight critical, and as many as four dead (last I heard) this disaster looks to have been a grim affair, and I hope that as many survive with all their limbs and organs intact as possible. German engineering is over complicated in general terms, but it is also of high calibre, so someone is going to be looking into this matter very deeply, to establish what went wrong and where.

posted on Feb, 9 2016 @ 03:24 AM
link
So very sad, my heartfelt sympathy to the injured,may they recover well and soon.And especially to the bereaved loved ones of the departed,all my sympathy.

Thankfully it is a vacation in Bavaria, usually the train would be flooded with pupils and commuters. Not so many this time.


*And to all people who want to bring refugees into this: go and do something awful and maybe sexually explicit to yourself. This is a technical problem and there are no refugees involved, unless as a passenger.*

Edit: Pictures
edit on 9 2 2016 by ManFromEurope because: (no reason given)

originally posted by: Teddy916
Hopefully this was just a bad accident and not a terrorist attack.

Sorry but I am getting sick to the back teeth of hearing stuff like this every time there's an event which includes loss of life. Things like train crashes, on a large scale, unfortunately, have happened for years. Not everything is because of terrorists!!!

The accident happened near Bad Aibling.

Never heard of Bad Aibling? Well, thats exactly what the NSA wants to hear from you..
They built the largest spy-domes in Europe there, now it is under "control" of the BND (Germanys wanna-be-equivalent to the NSA). Wikipedia

posted on Feb, 9 2016 @ 08:19 AM
link
BBC have just shown what can only be figures for the trains separately, stating 4 dead and 50 injured then stating 9 dead and 100 injured, all within the same news scroll..

Horrid situation to have upto? 13 dead and 150 injured, dealing with that amount of people must be a logistical nightmare. Hats off to the guys and girls on the ground during this grim time..

I can only surmise at the moment as I have knowledge all be it quite limited of the train network here in the UK but I can only think a catastrophic singal failure could allow two trains to be on the same track approaching each other?.. If a train runs a red signal there should be a fail safe in place that puts an emergency brake on. It is a very serious situation here and you would be reprimanded if you tripped the brake whilst in normal service. That along with what I would expect is a control room looking at real life locations of the trains makes this quite a disaster.

I glimpsed a shot from what looks like a copter and the track seems to be single file?, that would take out the possibility of one of the trains jumping the track into the other..

EDIT just had this pop into my news feed

This specific line also had automated train braking if it crossed a red light and did not stop by its own. The failure must have been complete. 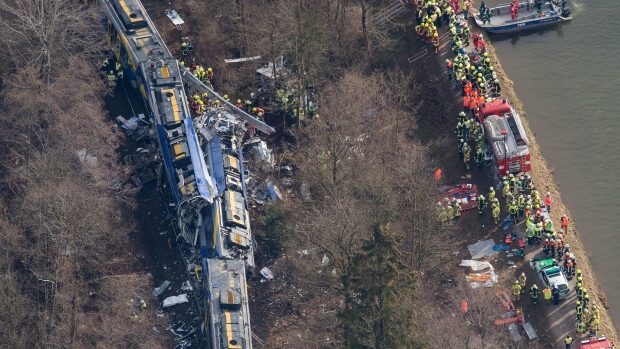 Definitely a nasty crash. As always those who were closer to the front met their maker first. Tough to see but there have been many train accidents in Germany over the years. Shift happens and I am glad it wasn't worse!