posted on Feb, 8 2016 @ 10:36 AM
link
Went and made myself an atbash-key. I cut out two wheels with about an inch difference in diameter from a piece of cardboard, divided the two circles in 22 even sectors and wrote the letters of the Alef-Bet along the edges of the wheels, one in each direction, with a hole in the center of each and a thingie to lock them in concentric position allowing me to turn each wheel. 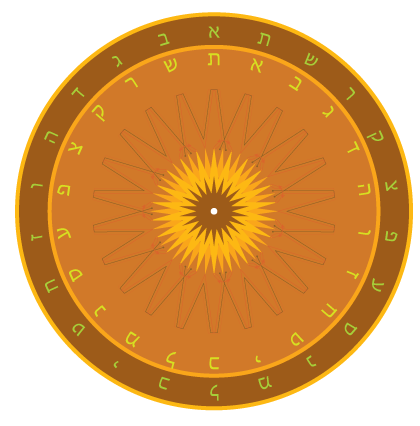 (A rather pimped up Atbash wheel).

«Albac cipher»: If I turn the wheels to (see pic below) let A (א) be L (ל), Heb. גולגאתהא or «GULGATHA» (the supposed Hebrew name of Calvary), a name that hardly make any sense in Hebrew— reads like Heb. יזאילמחל «IZAILMHL» or Heb. יזאיל מחל or «Isaiel-Michel», one way of writing «Jesus Michael». Odd. Odd indeed! 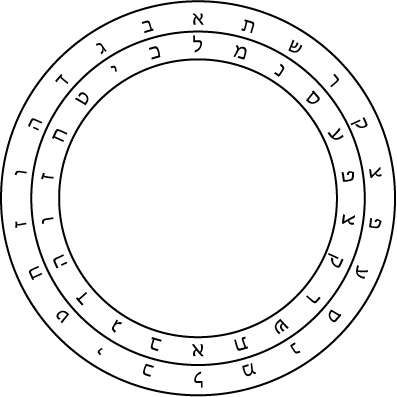 (I call this the Albac wheel)
edit on 8-2-2016 by Utnapisjtim because: Hebrew + Albac pic + edited title

Interesting. Please expand on this. I'm an idiot where this is concerned. I'd like to know more.

Quis ut Deus?, a Latin sentence meaning "Who [is] like God?", is a literal translation of the name Michael (Hebrew: מִיכָאֵל‎, transliterated Micha'el or Mîkhā'ēl). "Michael" appears as the name of several men in the Old Testament.

I just played with the cipher key and one of the first words I tried was Golgatha (written with slightly different vocalisation, from how it sounds, involving the Alpha and Omega shifting, assuming the last o is a schwa alef) which is given as the Hebrew name of Calvary in John 19:17

«and he went out, bearing his own cross, to the place called The Place of a Skull, which in Aramaic is called Golgotha.»

There is a place in Jerusalem called Golgotha, but its been named such long after the fact by pilgrims or people making money on them. So I assumed it was a code of some sort. Turning the wheels for five minutes and I ended up with the one below:

Can I have discovered a real hidden code in the Gospel? Even the name of the Good lord himself?

Also notice how when A is L the different corresponding letters look rather alike, and these are typically the ones you'd mix up starting to learn Hebrew. This cipher har been around for millennia. There are a couple gibberish names in Jeremiah (Thread link) coded in basic Atbash cipher (A=T, B=S) for instance, revealing hidden names for Babylon, and using the simplest Atbash cipher (A=T, B=S) «Baphomet» becomes «Sophia». In my exercise I use a slightly alternate Atbash, or rather Albac (A=L, B=C as in the black and white wheel in the OP.
edit on 8-2-2016 by Utnapisjtim because: (no reason given)

More! More! This is fascinating stuff.

If you have seen my threads about 616 vs 666 and read how 616 written in Hebrew becomes ת''ריו which is Greek Theriou («of the Beast»), anyway, if you take תריו and runs it through this thing with A=N, you get ספ הט possible: SuP HeT which translates «End Sin» which is relevant, or read in Greek, Sophit and changing the T with an A another classical Hebrew encryption thingie (Alef and Tav in Hebrew is the same as Alpha and Omega in Greek) it reads Sophia and translates as «Wisdom» or «Wise», which is also highly relevant.
edit on 8-2-2016 by Utnapisjtim because: (no reason given)

Geez, you're sort of damned if you want to teach yourself. Isn't wisdom what every human strives for?

Suspecting that hitting someone in the face probably hurts is knowledge. Being hit in the face is wisdom. Knowledge comes from learning. Wisdom comes from experience.
edit on 8-2-2016 by Utnapisjtim because: (no reason given)

Suspecting that hitting someone in the face probably hurts is knowledge. Being hit in the face is wisdom. Knowledge comes from learning. Wisdom comes from experience.

Either way, isn't wisdom forbidden? Isn't that why we went through the whole serpent in the Garden thing?

I demand more translations. You must deliver. I'm dying of curiosity.

Proverbs 2:6-8
For the LORD gives wisdom;
from his mouth come knowledge and understanding;
he stores up sound wisdom for the upright;
he is a shield to those who walk in integrity,
guarding the paths of justice
and watching over the way of his saints.

and 8:12
I, wisdom, dwell with prudence,
and I find knowledge and discretion.

By the Gnostics, Sophia was seen as the feminine aspect or consort of God. Wisdom is a good thing. The tree in the garden is called the Etz ha-Da'at, «Tree of Knowledge». Supposedly 6000 years ago a man and a woman destined to become humankind, broke the rules of their Lord and chose for themselves the path of knowledge, and end up being gods themselves. Knowledge is not really wrong, but with the implications involved— to a God— it would be unethical just to allow the humans into the deepest vaults of knowledge and wisdom. We've been breaking eggs ever since and still we can't agree on how to make a proper omelet.

It's all very confusing.

Did you run that name for the Tree of Knowledge through your translator?

There are 22 different basic ciphers in this simple thing. I think we'll just have to see what pops up as I fiddle with the damn thing. Quite fun though.

There are 22 different basic ciphers in this simple thing. I think we'll just have to see what pops up as I fiddle with the damn thing. Quite fun though.

If you use the cipher I used in the OP, A=L, Heb. ת''ריו reads TRIO becomes MSGZ, sounds like «Messages»! What gives?

If you use the cipher I used in the OP, A=L, Heb. ת''ריו reads TRIO becomes MSGZ, sounds like «Messages»! What gives?

Well, I have a few theories from the occult reading I've done.

Before you run away in horror, I'm a Deist, so I'm a believer in a Creator. I just think he made everything, then sat back in his La-Z-Boy to watch his story unfold.

The occult stuff, not necessarily Satanic, rather, hidden, all ties in together with the mainstream religious texts.

It's fascinating stuff. I can just imagine what the Vatican is sitting on. Greedy b******s.

Well Atbash is a simple substitution cipher, it has a Wikipedia page ==> en.wikipedia.org...

ETA: And what do you know, this Wikipedia page uses my exact code examples ==> Temura Wikipedia link ==> Atbash, Avgad and Albam. What gives? The synchronicity involved here.... Anyway, it lists Temurah (substitution ciphers) together with Gematria (letters' numerical values) and Notarikon (shorthand) as quote: «the three ancient methods used by Kabbalists to rearrange words and sentences in the Bible».
edit on 8-2-2016 by Utnapisjtim because: (no reason given)

Well Atbash is a simple substitution cipher, it has a Wikipedia page ==> en.wikipedia.org...

Yeah, I looked for and bookmarked it, but I'm an idiot in some respects and I know nothing about Hebrew.