. . . Sir Bernard Hogan-Howe, the head of the Met police, was shown a video of an eagle catching the drone and was so impressed by it he had dispatched during a meeting a senior officer to determine whether such practice could work in London.

The police issue eagle specific body armour is going to be a sight to behold.


This one seems less likely to create an animal rights stir, but I prefer the idea of Police Eagles patrolling London.


Horses have died in their frightened attempts to escape drones that can appear to them like giant biting insects. Children have been blinded. The potential terror applications of drones are almost endless.

posted on Feb, 8 2016 @ 05:05 AM
link
Wonder if the Iranians used something like a bigger better drone defender a couple of years ago when they took down the super secret USA drone ? Naw can't be that easy now can it ?

posted on Feb, 8 2016 @ 04:15 PM
link
This is my favorite drone catching technology. They're using a net fired from one drone to capture the intruding drone. They call it the Robotic Falcon. 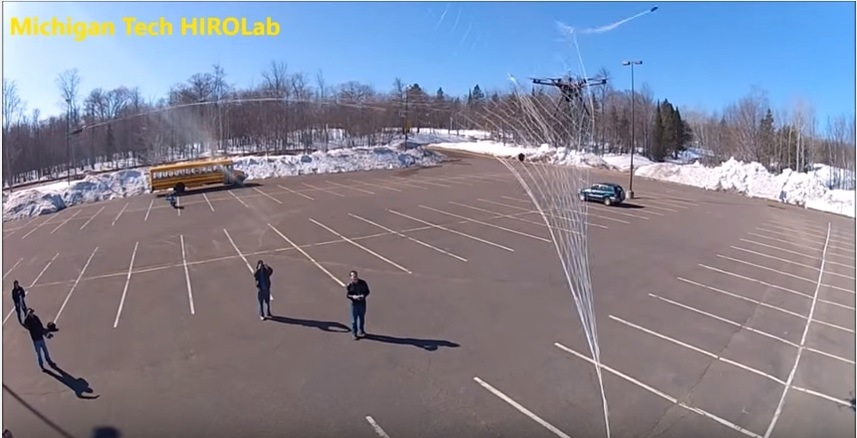 This is the view from the captured drone.

posted on Feb, 8 2016 @ 04:24 PM
link
How about some one putting some aluminium props on their drone.
You think the eagle stands a chance then ?

posted on Feb, 15 2016 @ 04:04 AM
link
a reply to: 727Sky
Predator drones now not so predatory after all. Soon their will be lots of weapons to bring these drones down including the bigger ones that some governments seem to like to use. If a drone can be spotted it can be brought down. How long until drone swarms with multiple decoys are used or drones are involved in dogfights with other drones.

posted on Feb, 15 2016 @ 04:07 AM
link
a reply to: DexterRileya bigger metal version of this could be used to bring down helecopters

Another of the many ways these things can punch well above their weight.

posted on Feb, 16 2016 @ 02:31 AM
link
While the "drone defender" is a weekend science project for the RF talented, I'm wondering how Battelle is getting it FCC approved.

Intentional jammers are a no-no for civilian use. Not sure how they plan to get that one approved.

originally posted by: Qspeedyrock
a reply to: DexterRileya bigger metal version of this could be used to bring down helecopters

There's an amusing improvised device you can use to f up helicopters that are landing at a spot you can get to for a few minutes.

Envision a claymore buried pointing up, with a little pinwheel sort of device on the surface acting as an electrical detonator.

The helo comes in, the downwash spins the pinwheel, bang. Claymore at close range to the underside of the helo.


Miss Hale said Jafari stood in front of the chopper and then started hitting its nose with his plastic bag.

She said: "At that point I realised he was angry. The bag was definitely hitting the helicopter. I think I was looking at my partner at that point. It was just the way he was looking at us, it was really intimidating."

Miss Hale described how Jafari kicked the helicopter and, petrified, she shouted for them to leave.

She said the pilot started to take off when Jafari jumped up and grabbed one of its skids. She said: "He clung on to the skid and we lurched to the right. It was a bit of a blur after that. I started to cry.

While the "drone defender" is a weekend science project for the RF talented, I'm wondering how Battelle is getting it FCC approved.

Intentional jammers are a no-no for civilian use. Not sure how they plan to get that one approved.


CNET says that it's not going to be available to the public right now. Only feds with FCC approval.

But will the device ever be available to the ordinary citizen, as so many military gadgets ultimately are? It would surely defuse disputes such as the one in Kentucky, where the drone's owners came to the shooter's door in not the finest of moods.

"At the moment it can only be used by federal authorities with appropriate FCC approvals," Delaney told me. "We are exploring future uses as regulations about drone technology evolve."

It could turn into a cottage industry, much like the days of illegal cable and satellite decoders.

We built a number of RF jammers for cell phones and wi-fi for entertainment. Selling them can be problematic.

It's pretty much the same for GPS and the bands used to control most drones. But selling them would be an issue.

posted on Feb, 16 2016 @ 03:51 AM
link
Eagles:
Extremely cost ineffective to use a live animal (with welfare concerns) to do a job that is basically 99% standby.
Might work on hobby drones but anything that actually presents a security (rather than a privacy) risk is likely to be heavier meaning more powerful rotors meaning more eagle legs for tea.
I also wouldnt want to be the insurer of a system that might get tangled up with it's quarry (each drone is in an unknown configuration) and fall on some innocent bystanders head.

RF denial:
As highlighted; probably never suitable for civilian use.

Nets from drones:
Seems to be some sort of issue in terms of height and target acquisition that limits their effectiveness in situations that aren't set up demonstrations.

Given that the market for this probably isn't in one off public events but instead providing 24/7 protection for private estates/areas using a system that is relatively self maintaining- I'm not sure any of the above will be commercially successful.

Disrupting the medium seems like a good idea- maybe some sort of air vortex cannon or wind cannon like that tested at Hillersleben ??? According to reports it could shatter a wooden plank at 200 metres so this sounds ideal.

The eagles are going to be quicker and more accurate. It could work for a stadium attack. Even a heavier drone may be deflected and slowed.

Leg protection will be the problem. Plastic blades are bad enough, carbon fibre is lethal.