posted on Feb, 7 2016 @ 06:38 AM
link
NASA lost their rag with conspiracy theorists telling them the moon landings were fake so they decided to shut them down with some pretty conclusive evidence...maybe?

In 1969 Neil Armstrong became the first man to walk on the moon and despite NASA beaming the whole thing into people's television sets, a whole bunch of people still think it was all faked. And not just that one landing, but every landing between 1969 and 1972.

Conspiracy theorists have long argued the whole thing was a hoax covered up by NASA and the US Government in an attempt to win 'The Space Race' against the Russians who were also trying to get to the moon.

You can imagine after forty-odd years of being slagged off despite discovering things in the far corners of the universe humans might only have ever dreamed about discovering, NASA had enough.

Their answer to the criticism was to unleash almost 10,000 images on Flickr of the marks left from the original moon landings. There's quite a collection...

But very cool pictures anyway. Thanks for this!

posted on Feb, 7 2016 @ 06:50 AM
link
I just wonder if it has taken this long to remove every single trace of trickery in their shots. After all, there is thousands of photos here.

But thanks for reminding us once again. I still prefer the photos at the Apollo Lunar Surface Journal, since they have been colour-balanced and cleaned up a bit, and that website also provides a shot info about each image.

But for those who want the raw, untouched deal, that Flickr archive is the way to go.
edit on 7-2-2016 by wildespace because: (no reason given)

posted on Feb, 7 2016 @ 07:18 AM
link
And again, as has been mentioned in the other posts about this, the photos were not 'unleashed by NASA' because they 'lost their rag', they are an online collation of all the available raw images put together by an enthusiast.

It is not an official NASA archive, but all the images on there have been publicly available online at various NASA sites for many years.

I also like Gateway to Astronaut Photography of Earth, as they have the photos uncropped and, sometimes, the original (the result of scanning) TIFF files.

posted on Feb, 7 2016 @ 07:41 AM
link
I am still confused that there is only either 'they landed' or 'they didn't'.
I have always been of the opinion that they didn't land the first time [too little time, 9 month from paper to landing, race against Russia etc] but they did land afterwards.
So yes they landed and there will be images, but I am still dubious about the first time. Can't we have a name for a conspiracy theory like mine?
It's annoying to always explain. 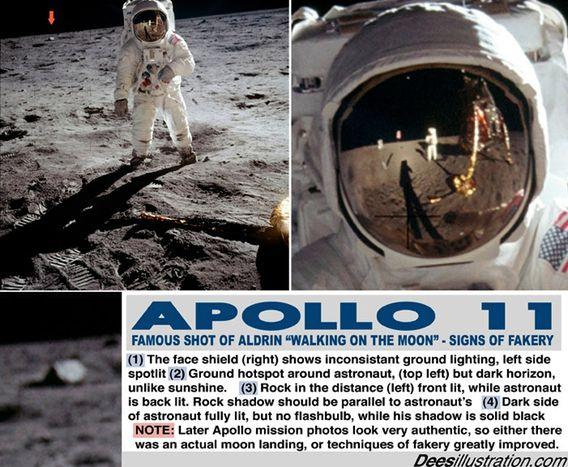 
I am still confused that there is only either 'they landed' or 'they didn't'.

Well they landed and orbited the moon at the same time.

So in fact they did both.

posted on Feb, 7 2016 @ 08:30 AM
link
Whats always amazing to me is how whole historical records are generated from a few scraps of ancient pottery or text while the most documented, catalogued scientific exploration event of the ages is considered faked.


Can't we have a name for a conspiracy theory like mine?

Not close, wrong, are two we can name it.

posted on Feb, 7 2016 @ 08:46 AM
link
Thousands of years time, people will be going to the moon to try and find the landers, just like 'they' search for Noah's ark to day. Theories will arise that the lander was not big enough for two men/women, the onboard 'computer' could not add up 5+5, the lander legs were not strong enough anyway, plus sputnick got there first, both midgets died by drowning when they got back to earth, Kubrick's films were made after Apollo 15 got smashed by Apophis, Which is why the third one never got made, Kubrick was onboard.

Why in some of the photos on the flickr you can see stars ? Are they just artifacts or something else ?

If they are artifacts, why is there any artifacts in analog images ?

Why on shots of the moon, is there weird transitions between edge of the moon and space, it looks like a poorly edited photoshop where you try to cut something from an image and it leaves jagged edges when you haven't cut out the shape perfectly ?
edit on 7/2/16 by Discotech because: (no reason given)

originally posted by: Rapha
Too Little, too late.


Thats why the conspiracy is continually presented, to keep people distracted far away with 'give a toss' subjects like this.

Personally, I think the at least the first one was faked maybe the second. Why you ask? Simply because of the era that it happened, Russia had done so much in space and with Sputnik floating above their heads the American people were panicking and concerned that Russia might have the ability to fire missiles or some bomb from space so to try and save face America decided to do the same but failure after failure, people including astronauts who were part of the first chosen team members were saying that it wouldn't work and they died in "accidents" including (I cant remember the name of the guy) an inspector who wrote up a report saying that there were problems and listed them and even he died (I think it was a car accident or a suicide, maybe I should look that up).

Russia were planning to send a man to the moon at the same time and claimed that they would put a Base there and that would course a ton more panic so still failing the US had no choice but to fake it. How? Well here is how I would have done it.

Firstly make the announcement years in advance, then hire the best director on the planet and offer him a chance to help his government and country against the Russians (American pride is a huge thing) he signs a confidentiality agreement on the condition that he got funding for all and any film he wanted to make in the future, I'd have agreed to it (Remember I'm in charge) at which point they tell him what they want to happen, he thinks about it but eventually agrees.

The building of the rockets goes like normal with all the people who would normally be involved because as far as they know they're going to the moon. The build the rocket and military men are chosen to be the first to walk on the moon, being in the military they would do anything for their country and agree to do it but what do they do? They go into the rocket and fly up, they will fly to the moon and take pics and then go around the moon (orbiting a few times).

Back on earth, I have a movie set but HUGE and have actors doing the actions and an already recorded footage of voice work and close up shots of the guys who we "sent to the moon" but rather than allowing people to hook into the system (Which they weren't allowed) I'd have them recording off another set in another room (which they did) so that adjustments could be done.

Finally, I'd have the moon rocks either fabricated (look it up a lot of the rocks ended up being fakes, one was made of wood which I dont understand lol) or from the stock we'd have from asteroids etc. then I'd let everything go as it did (in the real world) and then finally bring the guys who've been orbiting the moon back to earth and celebrate them as heroes.


Why, well because at that point Russia would be like "Oh now we're second" and Russians much like Americans have strong pride in their country. Doing it that way, there are very few people who would know that the moon landings were faked, the rocket builders had no clue, only the astronauts (four or so guys there) the military soldiers acting out on the movie set, the director and a few senior people in the government and military.

Done. That is how I'd have done it and how I believe it happened (I've left a few bits out) but to those who poo poo it, that's fine. I'm not saying we've never been I'm saying the first one or two were faked to A) Show that America was more powerful and capable than the Motherland, B) To give the American people a false sense of security that Russia wont drop a bomb because America could defend them. C) Pride. Americans, as I've said, are very country strong, they will defend their country (not the governments) to their death.

Those "signs of fakery" were posted by someone who doesn't understand how light, reflections, and shadows work.

The dark side of the astronaut is lit by sunlight reflected off the lunar surface, while his shadow on the ground doesn't get any light from the blackness of space above him.

The "front lit" rock simply has a slanted face that catches enough sunlight. The sun isn't shining directly from the back of the astronaut, if you look at his shadow it shines from approximately 45 degrees (2 o'clock position).

The original looks pretty levelly-lit, no real hotspots there.

Here's my own version of the original image; I simply cropped it and used the "Auto Color" option in PhotoShop: 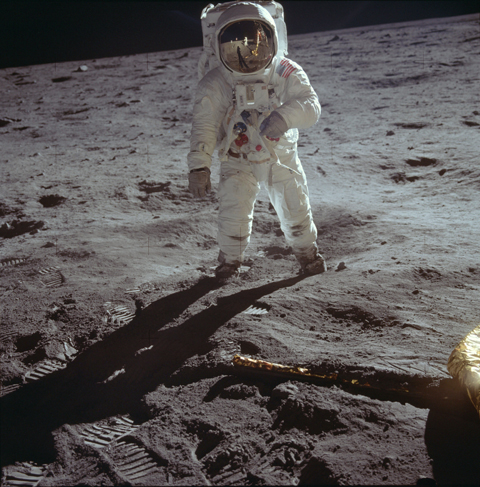 I agree with you that they never went the first time and I actually think they didn't get to walk on the moon until the third. I think the first time was a complete failure, the second they went and orbited the moon and on the third they landed and walked about and from then on it happened almost as they say. If and I'll say IF that's the truth (which I believe it is) and NASA came out and said "Alright look this is how it happened" and said something like that, while I'll be screaming "We knew it!!!" I'd be okay with it, all they'd have to say is that they did it for propaganda against the Russians.