posted on Feb, 6 2016 @ 06:28 PM
link
I don't consider myself a Christian, but I could probably be converted if I found a church that didn't feature a s#y rock band (not that it would make much of a difference if they were any good) every Sunday. You're taking an aspect of the secular culture that is, in many aspects, diametrically opposed to what you teach and infusing yourself with it. It might sound silly and petty, but I'm not joking. This noise is one of the primary reasons I avoid "non-denominational" services like the plague. It's everywhere, and I just don't understand it (and it makes me really uncomfortable).

Let it be said that I have somewhat of a love-hate relationship with pop music. As a musician (or someone who thinks he's one), I will never be able to divorce myself from it entirely. Nor would I want to--it's too much fun to play. Having said that, pop culture in general does glorify many things to which I am deeply opposed (drug addiction, sexual promiscuity, etc.). I have to perform a certain type of mental gymnastic to justify my participation in the whole thing--that I "use my music to reflect the decay of a corrupt system", that kinda contortion.

I can justify it to myself and get away with it (I think), but I don't see how the Church is justified in making it such a dominant theme of their worship services. I know they're trying to be "contemporary" and "socially relevant", so as to attract new people and retain the ones they've got. I know they're trying to involve youth in positive ways such as music and other forms of art. I get that part. I really do.

But this is just not "church" to me: 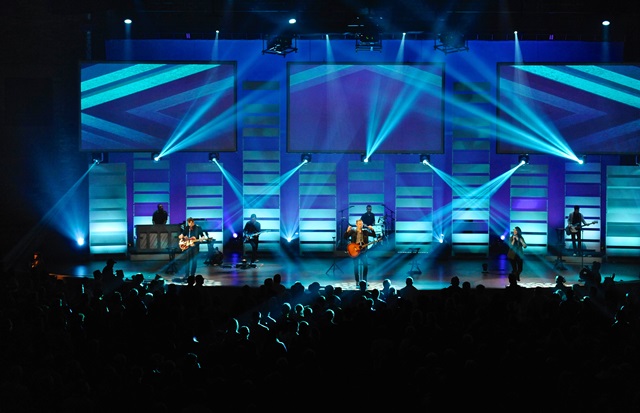 I can't see Jesus amidst the light show. If I want to go to a Pink Floyd tribute concert, I'll find one. I want a church. Shouldn't it be a quiet, reflective environment where you can hear the promptings of the Spirit? In that disposition, I suppose I wouldn't be comfortable in a black Southern Baptist church either. But it's different. It isn't a professional production (most of the time) with video screens that cost what it would take to feed a homeless family for a decade. There's isn't some spoiled seminary student greased in pomade and eyeliner who doesn't know how to tune his $3K Les Paul.

I dunno. It just doesn't feel right to me at all. What do you guys think about it?

*** Please don't turn this into a Christian-bashing thread. Anyone remotely familiar with my posting habits should know this is not intended as a rip on Christian theology or belief. It is a genuine concern that holds me back from being more involved with your community, as silly as it sounds.

posted on Feb, 6 2016 @ 06:31 PM
link
a reply to: NthOther
Yes, it will be a question of "How can we bring in the young people, who will hate the old-fashioned tunes?", but you may find that the older existing members of the church are just as annoyed.

Perhaps you should stay away from evangelical churches and aim for one that's a little more low key...

IF you're looking for a church that is... why you would want to do that is beyond me

Kids aren't stupid. And they wonder why they're losing popularity with youth.


I have seen this "once" and wasn't impressed. They also had a coffee bar!

The service was very strange (to me anyway). I am used to a more "traditional" feel, you know that old fashioned service where there is a piano and or organ and the whole congregation stands and sings from a hymnal.

Now this place, they had the band on stage, the people in the chairs stood and waved their arms back and forth while the karaoke words were streaming on big screen TV's set up.

Creepy. Very Creepy...... seemed kind of something you would expect to see in a "cult" from the 80's.

Anyway. Not for me.

All I can say is this Church seemed fake and dead to me. There was none of the "chills" or electric feeling running up my spine that you find other places.
edit on 6-2-2016 by infolurker because: (no reason given)

Right, but then you get into the heavily institutionalized denominations, which is what I also want to avoid. Is there no middle ground between the rigidly dogmatic and the total sellout?

No, I completely understand. It often comes with the Rick Warren, Joel Osteen and similar style of preaching. And it infects more than just evangelical churches. A lot of congregations that are losing members are resorting to it to try to appeal to younger folks.

I think it's the "itching ears" phenomena myself.

I mistrust church for this reason, and I am worried that we are going to need to find one now that our son is getting to that age. I don't really know where to head to.

You really sound like you want a smaller Bible based church that doesn't have the members and money to put on that kind of show.

A little contemporary Christian music is all right as a special thing, but your services shouldn't be composed of it entirely or primarily IMO.

Personally I would much rather hear Christian rock then the hymns of my youth...

At least its music... Even if the topic of the music is Christianity

These establishments are all bark with no bite. There is zero substance to an outfit that uses this means of delivering the gospel of Christ.

The gospels, and in particular the apparent words that Jesus actually spoke, don't need flashy lights and sounds to be impactful.

I'm sure Jesus said something about being modest and not making a fool out of yourself.

I wonder if they have bouncers at the door collecting an entry fee with compulsory "donations" throughout the concert service?

You really sound like you want a smaller Bible based church that doesn't have the members and money to put on that kind of show.


Not exactly. I think it's a good thing for a church to have lots of resources to invest in its membership and community at large.

I suppose I'm looking for one that has no desire to conduct such services, even if they had the money to do so.

posted on Feb, 6 2016 @ 06:45 PM
link
a reply to: NthOther
I don't see how non-traditional music, no matter how irritating, actually compromises the belief-system.
Were you aware that some Protestant sects (including, at least originally, the Kirk of Scotland) actually frown upon organ music as well, because organs are not mentioned in the Bible?

posted on Feb, 6 2016 @ 06:46 PM
link
I attended a couple of services in Southern California of one of those Evangelical churches with the Rock Band. The performance came across just like a small band playing in a bar lounge.

This particular church was growing very quickly and had made several missionary trips to Africa. They also had the largest Youth Group that I have ever seen. The Youth Group had their own building with a snack bar and arcade.

I went a few times, and I liked the Pastor. However, the last service I attended was when the Pastor was giving a sermon where he compared biometric computer authentication to the Mark of the Beast. I walked out in the middle of the sermon and sat in the car waiting for the rest of the family to come out after the service.

For the record I'm not into religion at all. But I do find that some churches are actually more interested in the spiritual aspects and not at all interested in a fixed dogma.

That's going to be quite a task.

A church is one prime to be taken over. They exist, but you will have to search for them.

I don't see how non-traditional music, no matter how irritating, actually compromises the belief-system.


It doesn't, necessarily. But that "non-traditional music" is associated with many, many things that are incompatible with Christianity.

Of the many many many things that make me uncomfortable at a church service, it is normally the music that will drive me insane. It's just that it actually makes you feel like you an idiot for sitting there, as if you are letting them think they fooled you with the allure of crappy pop music.

The one exception was when my spouse and I lived in a black neighborhood and went to a typical "black church". No crappy pop. No annoying worship soft rock. Just choir. It was beautiful enough to charm this witch, for sure.

So maybe that's where you should look? By the way, it's not nearly as awkward as you might think it is to be the only white people in a large church.

posted on Feb, 6 2016 @ 07:01 PM
link
because your typical hymn book is old fashioned and boring. The singing is pathetic and off-key. Where a rock band is "bringing Jesus to the people!" I first encountered this in boot camp where church attendance was mandatory. You either went to the Protestant or Catholic services. I don't remember there being a Jewish service (though there might have been) and there certainly weren't any Muslim, Wiccan or other cults available. If you refused to go, you had to stand watch (which I did after the first time.)

I got in HUGE trouble at the hospital (where I had pneumonia from hot outside and AC inside) and said "No Preference" when asked whether I was Catholic or Protestant. They just raked me over the coals for that one, and as a "boot" I really had no power to stop them.

It's just that it actually makes you feel like you an idiot for sitting there, as if you are letting them think they fooled you with the allure of crappy pop music.

Thank you for articulating it. It would be as if I couldn't understand the Gospel without Creed.

That boring old-fashioned book also helps to connect you to the tradition of your faith, too. It is supposed to bind a congregation together to be able to sing with each other the songs they are all familiar with (or will be if they are regulars).

The contemporary stuff sounds good, but isn't stuff they can build a shared tradition out of as easily. It doesn't connect like the old stuff is supposed to.