Sanders Verses Trump, Lets Do This!

I really want to see the ultimate political showdown between the two competing ideologies and personalities.

There both kind of outsiders, who wants to see Clinton verses Bush, that's boring been there, done that.
Here are the others to pick from
Cruz is a slim ball
Hillary has legal issue's
Rubio is a huge neo-con
Jeb is just pathetic
Carson will put you to sleep with his speeches, really nice guy though.
The rest will drop out after NH

Sanders seem genuine, for giving free stuff out, if the country is going down might as well get some free goodies before it does.
Trump is an absolute buffoon, but at least he is authentic and he fights the insanity of the PC.
So pick your poison, and have fun this election cycle.

posted on Feb, 5 2016 @ 10:01 AM
link
At least with that outcome we'd know things are going to be radically different when it's all over. Any other candidate just feels like more of the same.

Sanders has already said he wants to raise my taxes by at least 9%.

Bernie Sander’s tax plan: it calls for massive tax hikes across the board. Why raise taxes on the middle class? Because that’s where the money is. 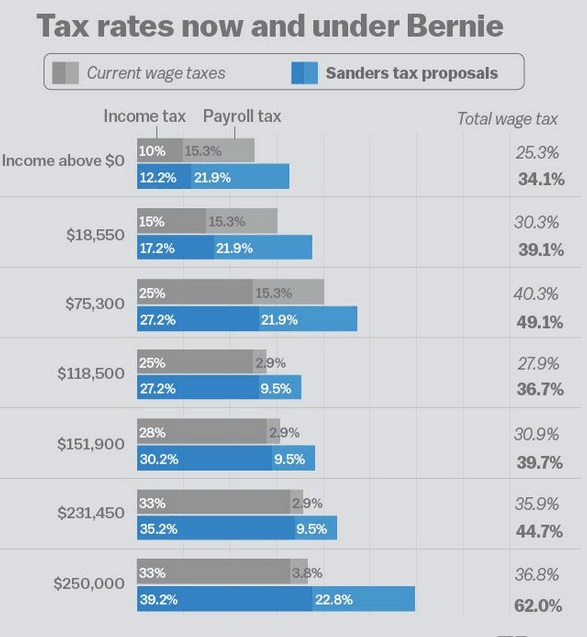 posted on Feb, 5 2016 @ 10:15 AM
link
Good lord I hope come November we are not forced to choose between Bernie Sanders and Donald Trump...

Edit: if I've gotta choose its a no-brainier....I will pick the guy who did NOT honeymoon in the Soviet Union and does not want to tax me into oblivion....the payroll tax is preposterous....and absolutely typical of a big government liberal who thinks he is entitled to my money...

Great if your a government employee and can leech the best healthcare and a pension for the rest of your life at the expense of the taxpayer as a "bonus".

ETA: Not part of the elite, not moving jobs out of the country, has a consistent history in politics unlike Trump, doesn't want to lower taxes on the filthy rich, actually has a healthcare plan, and many more things.
edit on 5-2-2016 by amicktd because: (no reason given)

Tell you what, if Trump is going to grow government bigger than socialist-Sanders and tax me even more than Comrade Bernie, I'll change my vote.

God no! 40% tax bracket under Sanders after busting my butt to get here, just to pay for more beurocrats? He can take a leap.

posted on Feb, 5 2016 @ 10:41 AM
link
Trump wants lower taxes. People scream but you can lower taxes. You just have to also cut budgets. There should be less coming in AND going out...

posted on Feb, 5 2016 @ 10:45 AM
link
I would say it's more a case of socialism vs plutocracy, but the American Dream is you can be a plutocrat too so you will go with plutocracy and continue to vote against your own and communities interests.


Plutocracy (from Greek πλοῦτος, ploutos, meaning "wealth", and κράτος, kratos, meaning "power, dominion, rule") or plutarchy, is a form of oligarchy and defines a society ruled or controlled by the small minority of the wealthiest citizens. The first known use of the term was in 1652.[1] Unlike systems such as democracy, capitalism, socialism or anarchism, plutocracy is not rooted in an established political philosophy. The concept of plutocracy may be advocated by the wealthy classes of a society in an indirect or surreptitious fashion, though the term itself is almost always used in a pejorative sense.[2]

Let's not and just say we did.

I see political doom on the horizon.

Well sure the middle class does have some of the money but the rich have most of the money. The thing is they hide and cheat with paying taxes on that money, so that leaves the burdon on the rest of us. We need to get rid of the bull# rules that allow the rich to hide their money and then tax the # out of them. One less golden toilet seat.


Tell you what, if Trump is going to grow government bigger than socialist-Sanders and tax me even more than Comrade Bernie, I'll change my vote.

Tell you what, once you actually read Bernie's policies and quit stating the same false statements, let me know and and we can have a constructive debate.


Tell you what, if Trump is going to grow government bigger than socialist-Sanders and tax me even more than Comrade Bernie, I'll change my vote.

Tell you what, once you actually read Bernie's policies and quit stating the same false statements, let me know and and we can have a constructive debate.

Will taxes go up under a Sanders presidency?