I Have Jury Duty

She gave me the letter from the courthouse from our tiny little town way up in the northwest corner of the US.

But it'll probably be a traffic case. Or a dog barking case.

Nothing I can write a tell-all book on.

So ATS, what have your experiences been with jury duty?

I've never been selected, I don't know anyone who has. 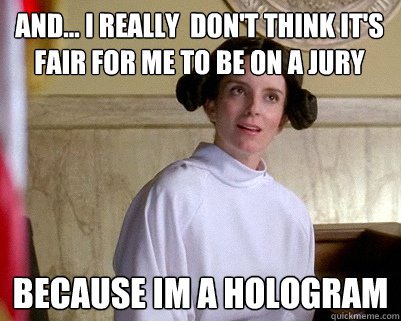 I'm old enough so that if I soiled my trousers, they'd just "tsk, tsk" and send me home.

But I might try to have fun with it.

Next notice came about 2 years later. This time I called the courthouse phone # the night before and found out I DID have to report the next day. Showed up at 845, watched a half hour long video, drank a coffee, then found out there were no cases for the day and went home around 10.

My next notice came about 4 years after that. I called the courthouse phone # the night before and they said I wasn't needed the next day.

Yup... nothing exciting from me!

I just got a summons for jury duty today also.
Fifth time

just say you are a republican and you'll be outta there in no time. or vice versa in texas
edit on 3-2-2016 by DrakeINFERNO because: (no reason given)

I feel for ya!

BUT...what if IT is something exciting...OR

have you ever seen this movie?

I have never been called but, the few folks I know who sat on, it was very unexciting stuff.

posted on Feb, 3 2016 @ 08:27 PM
link
Getting out of it is easy but wouldn't you rather do it? The prosecution is gonna bounce you in the first round, anyway if they find out how you really feel! At least that's how it works with me.

When I wanted to defer mine I just said I would have a hard time not accepting the cops word as fact. I got on a seat in the benches and then the prosecution kicked me off before I could warm it up for the next person. 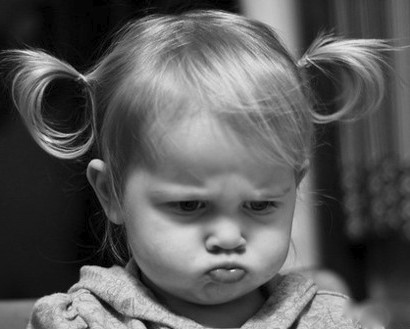 If it's on the Steven Avery "Making a Murderer" case. Make sure to get him out

posted on Feb, 3 2016 @ 08:34 PM
link
I would be an excellent juror. I can pick out a guilty person (snap fingers) just like that.
The George Carlin technique for getting dismissed.

posted on Feb, 3 2016 @ 08:34 PM
link
In both of my occasions it was several hours of boredom followed by several hours of spineless jurors afraid to make the blatantly obvious decision. They finally convicted and then a few weeks later I received a check that barely covered the parking expense.

Sounds like what I face, though I'm looking for drama and intrigue!

I just got a summons for jury duty today also.
Fifth time

"You can't HANDLE the truth!"

If it's on the Steven Avery "Making a Murderer" case. Make sure to get him out


I can't make any promises, but I can probably be bought.

I'm in a pretty liberal county, might get a t-shirt that says, "Guns fer Jezus".

That should scare them.

posted on Feb, 3 2016 @ 08:55 PM
link
a reply to: DBCowboy
I've done jury duty. It was no big deal. Our case took a single business day. Remember not to bring your cell phone or any other recording devices. I won't talk about the case itself for confidentiality reasons, but I was pleased w/the outcome & my contributions to the jury.


Just a fair warning though; a murder case will last a lot longer than that. And you'll have to be very careful not to read media about the case or speak about the case. I think that if you talk about your case during the trial, they'll press charges against you (I don't remember though).

As a side note, I've never understood why people don't want to do jury duty. It's literally the most direct way a citizen can get involved in the system. If the case is about something you care about, why not try to get selected? I see people who claim they hate the drug laws, racial profiling laws, or whatever other laws; then they refuse to be on a jury that can overrule those laws (in that specific case).

Good luck with it!