What's the impact of new marijuana laws? The data so far...

Back in 2012, Colorado legalized marijuana for recreational use (See? That year really WAS the end of the world. ). We are now entering the fourth year since then. So let's see how far the skies have fallen since then.

Wait. The skies are only NOT falling, but every measurable statistic of concern about this plant is improving. Ok. Ok. That is just a summary. Let's get a more thorough breakdown.

Data from the National Survey on Drug Use and Health suggest that, over the past decade, marijuana use has increased significantly among adults aged 18 to 25 and those aged 26 years and older. These trends appear to have begun before 2012, when Colorado and Washington became the first states to legalize marijuana.

Meanwhile, marijuana use by youth aged 12 to 17 has not increased significantly. However, young people's perceptions of the risks of using marijuana have decreased, suggesting that they may be more likely to start using marijuana in the future.

So all the claims of more kids using it after it being legalized are completely false. And yes, I do see the point about young people's perceptions of the risks of using marijuana have decreased. That doesn't mean they'll start while teenagers though. Clearly, when coupled with the previous statistic, that means they are also very likely to wait until they are adults to try it.

Studies have consistently shown that the potency of marijuana is increasing. Data from California suggest that marijuana is more widely available, and that more drivers are testing positive for it.

Initial reports from Colorado and Washington State provide evidence on the effects of legalization. In Denver, marijuana-related hospital admissions, emergency department visits, and calls to poison control centers have all increased. At the same time, arrests for marijuana use/possession and admissions to substance use disorder treatment programs have decreased.

This isn't that surprising. Not everyone knows how to use responsibly. Especially considering the point about potency increasing. This just spells out the need for proper labeling on the products so people know exactly what they are buying. Of course that is something you won't get with marijuana being illegal and definitely IS something that can be enforced with it being legal.

Data from the Seattle area also show reduced rates of treatment admissions and police involvement, along with an increased prevalence of frequent marijuana use.

Keep in mind, when marijuana is legal, it is expected that police involvement with the plant would decrease. With legalization, the officer is required to PROTECT the marijuana user, not arrest them.

Naturally, there are more things we still need to learn about this plant, but clearly the world isn't ending with marijuana being legal. Hey to that point about increased drivers testing for it. First off, testing drivers for marijuana use is VERY inconclusive (they could have smoked 3 days prior and still test positive for marijuana). Second off, it's been studied and suggested that stoned driving is no where NEAR as bad as drunk driving.

I seriously would like to know if there is a more physically benign drug on the planet than mj.

Mentally sure it can cause some people anxiety or bring out a pre existing mental illness. (Possibly)

People use pot to get off other drugs and instead of physically more damaging drugs.

Than reschedule for goodness sake.

EXACTLY! If we need more research then reschedule it already! Open up the market to actually RESEARCHING it instead of sticking your finger into an ever widening hole in the dike.

I think it has a lot to do with people new to smoking smoking WAAAAY too much potent stuff, dabs or eating too many edibles all at once. The last one is especially concerning because of how long it takes ingested marijuana to take effect. The user believes that they aren't getting high, so they eat another one too soon. Then when it kicks in they are like "HOLY COW!"

But this all comes back to responsible usage. For one, none of what I said above will kill you or permanently hurt you; you just need to let it wear off. For two, we stress responsible drinking with alcohol, and it is REALLY easy to go overboard with that. Last I checked there is this thing called alcohol poisoning that many binge drinkers have to deal with that can lead to death. The worst thing you'll get with a marijuana overdose is be SUPER uncomfortable.
edit on 3-2-2016 by Krazysh0t because: (no reason given)

This is why it should be legalized so there is a standard. Nobody knows what's in the edibles or the concentrates. Let people make them at home and only sell the plant and have it tested like produce.

I am against edibles and concentrates as of now. They either need to be heavily monitored or just left to the consumer. You can miracle grow for speed and concentrate full of deadly chemicles. Perfect way to destroy the progress when people say look how bad it is.
edit on Wed Feb 3 2016 by DontTreadOnMe because: (no reason given)

posted on Feb, 3 2016 @ 02:25 PM
link
Unsurprisingly, all the areas in CO that were against legalization (and still are) have begun pushing to try to get in on the money. Its pretty amusing to watch, especially the various reasons given for why they should be paid.

Edibles are a strange part of the market currently. Very few make strain-specific foods/drinks, which actually does make quite a difference in everything from predictable reactions to medical efficacy.

The biggest change in the potency arena also tends to be derived from proper growing, and the imminently important curing process, rather than solely sourced in new strains.

Overall though, what I hope this will change is our approach to addressing such issues. I think that, finally, more people are starting to realize that simply making something like this illegal tends to end up more detrimental to society. Especially when talking about cannabis.

I think though, that to really start understanding the impact, it will take many more years. Ideally, we can get a clearer picture once we stop exacerbating negative areas out of ignorance and bias (like it being a cash only business, etc.).

The biggest problem facing the marijuana industry is the fact that it HAS to be a cash only business right now. It's next to impossible to get a bank to be on board with a marijuana business and the IRS forces the businesses to file their taxes with cash. It's ridiculous...

posted on Feb, 3 2016 @ 02:30 PM
link
Guys. I know people like to let us know about their experiences with it to make the information presented relatable, but we still aren't allowed to discuss them. Please refrain from talking about personal anecdotes about marijuana. You'll get the thread shutdown and this is information that really needs to be out there and discussed. Trust me, I think the rule is silly too, but that's the rules for now so we need to obey them.

It really is ridiculous. Its concepts like that that kind of obscure what is really happening in the industry and important changes that may need to be made. Honestly, it seems like its designed to intentionally trip up the industry.

I think it speaks to the integrity of those involved that there haven't been more issues. It also, perhaps, speaks to the lack of integrity in such detractors, who might have assumed hurdles like cash only would enable rampant corruption (likely due to personal projection).

I think its a really interesting topic, that in many ways, goes far beyond simply "weed."

P.S. Washington Post asks for your email to read the article (it didn't make me do this the first time - sorry for that crappy source)
edit on 3-2-2016 by FamCore because: (no reason given)

Well have you heard about the cottage industries popping up around JUST trying to keep legal marijuana sale money safe?

P.S. Washington Post asks for your email to read the article (it didn't make me do this the first time - sorry for that crappy source)

The marijuana industry could be bigger than the NFL by 2020

Discussion of issues surrounding legalization of marijuana are fair game for discussion within the Posse Comitatus forum. Discussions that involve personal use will tend to be disallowed, including thread closure and post removals (up to and including a posting ban).

Please abide by the rules of the house on this topic.

I have indeed! Without going into too much detail, I am connected to the industry through close friends and contacts.

I have, literally, been taken aback by how seriously the industry is taking all of this. Even down to minor things like asking people to use specific words with less negative connotations ("cannabis").

Its one of the most upstanding business communities I have known, even if it is basically out of sheer necessity. Its a shame that so much time and energy has to be used on such things.. But, it has also had the benefit of some pretty innovative and independent ideas. Now that I think about it, since these issues will likely subside over the years and they spur some creativity in order to deal with them, it might be a case of "six in one, half dozen in the other."

I truly am excited about when true progress and research can be made in the field. Hopefully it remains non-proprietary in the meantime. I don't see why it wouldn't, but I've learned not to underestimate others passions, obsessions, and ambitions.

Yea. Me too, but the biggest block to prevent us from moving forward is that damn federal scheduling program. It's so dumb... Practically the whole country is de facto smoking in some way or the other already.

Need we mention the off duty police officer who stole edibles that was evidence? He and his wife ate it, thought they were dead and called 911? Maybe true? LOL 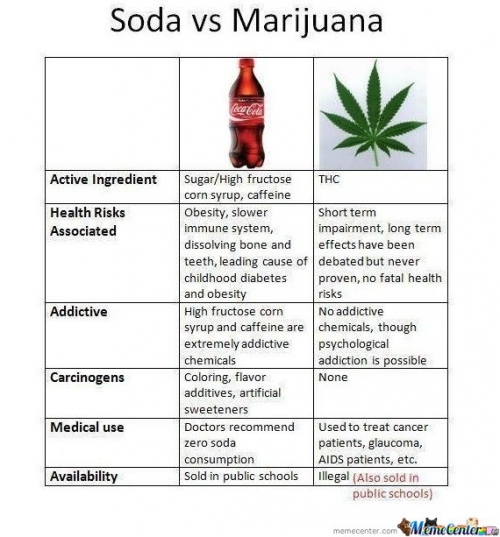