Gerrymandering simply explained. (How to steal an election)

posted on Feb, 3 2016 @ 02:48 AM
link
As we sit here scratching our heads over Hillary's apparent success in Iowa , there is a very real possibility that "the fix is in".

Earlier polls showed Hillary polling VERY low going into Iowa and reports of "coin-toss" decisions giving the edge to Hillary make awareness of political trickery all the more important in this election year/circus. 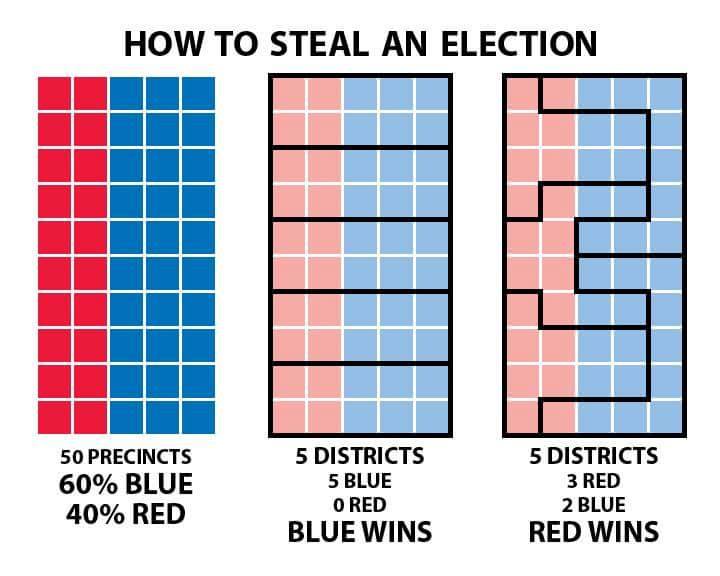 Sentiment for Hillary is at an all time low, she is mired in scandal, finding a real life Hillary supporter is as rare as a bigfoot sighting, and yet somehow she blows up in Iowa?

I hope it's just a fluke.

posted on Feb, 3 2016 @ 02:54 AM
link
Gerrymandering is prevalent in most finagled elections anymore. Also much of her base is simply because of the party affiliation.... so regardless if she is the devil incarnate they would still vote for her. At least Bernie is not a proven lying crook; yet ... hahah
youtu.be...

I heard he won 10! It wouldn't matter. The system is bizarre, but it wouldn't have mattered. I think you're being cheeky anyway.

It is not, but still applies. They can try to keep Bernies popular vote higher in some districts, but not high enough to award 4-2 delegates, so the delegates are split 3-3 even though Bernie won 64% of the votes.

Then they work it so in a small amount of districts Hillary stacks those votes to get the 4-2 margin needed.

In that way Bernie can win the popular vote by a lot and Hillary can squeak out a few more delegates.

Hillary may have gotten her win in Iowa, but I doubt she'll even be close in New Jersey. Bernie getting half of the delegates in Iowa, must have Hillary worried. Sanders wasn't even expected to be close in Iowa! It's quite an accomplishment for Bernie and it's definitely not a good sign for Hillary.

Agreed. I am not even a Bernie fan and I think he really shook some foundations the other night in Iowa. I think that they didn't even consider him a slight threat until then. If the fix is not in, Hillary should be quaking in her pantsuit.

He earned some respect for me that night to be sure and even though I am not planning on voting for him or Hillary.... Were it a coin toss? I'd be Bernie eons before Hillary.

originally posted by: Chadwickus
a reply to: abe froman

I watched two coin tosses captured on video where Hillary won, so how do explain that?


There were more than 7 coin flips.

posted on Feb, 3 2016 @ 03:49 PM
link
There are some so-called swing states that are changing the way they award electoral college votes from the "all or nothing" procedure to one that is based on gerrymandered voting districts.

The House of Representatives is pretty much locked down because of gerrymandering. Don't expect any change of control there anytime soon.

I believe it is highly likely that we will elect another president this year based on the fixed electoral college rather than the popular vote.