The biggest solar system ever found is very, very big 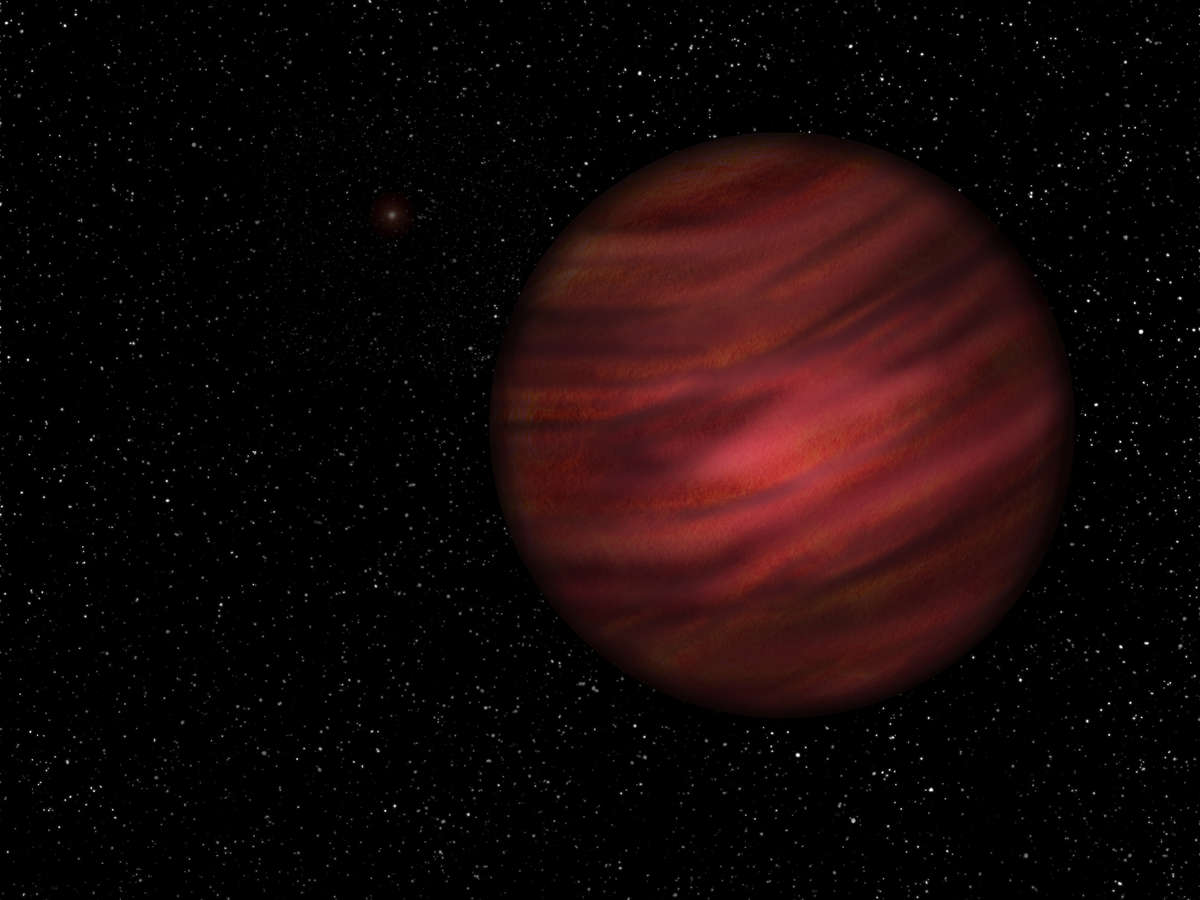 Scientists used to suspect a giant planet named "2MASS J2126-8140" was a rogue world, wandering the galaxy without a star to orbit. But it turns out the planet isn't homeless after all: its star is just very, very far away. Like, a trillion kilometers away (or about 621,000,000,000 miles).

To put that number into context, that's around 6,900 times the distance between the Sun and Earth (6900 AU or 0,1 LY). Its orbit is 140 times wider than Pluto's. At that distance, the dim red dwarf star would look like just another moderately bright star in the sky.

Astronomer Simon Murphy from the Australian National University and his colleagues uncovered the secret relationship between the planet and star after noticing that they were both located 100 light-years from Earth. Further analysis showed they were moving together as well.

The planet is believed to be a gas giant 12 to 15 times the size of Jupiter, and takes nearly a million Earth years to circle its star. Scientists aren't sure how such a far-flung solar system could have formed. “There is no way it formed in the same way as our solar system did, from a large disc of dust and gas,” Murphy said in a press statement.

Instead, the team suspects the star-planet duo were born relatively recently (10 to 45 million years ago, compared to our solar system's birth 4.5 billion years ago), and that they formed from

a filament of gas that pushed them together in the same direction," says Murphy.
"They must not have lived their lives in a very dense environment. They are so tenuously bound together that any nearby star would have disrupted their orbit completely.

Is that the only planet in orbit of its star?

If so, it would certainly seem as if the scientists are on to something when they suggest that this solar system is not likely to have come about in the same way as others do.

A star's gravitational field is never zero, it can get close to zero but never really reach it - that's why the bodies in the Oort Cloud still orbit the Sun even though they're over a light-year away.

What this poster says.


This is the reason for scientists belief that if the universe is currently expanding and clumping up into stars ("light" gasses compressed to fusion) and planets (other matter compressed from old stars exploding) will eventually slow down due to this slight pull however far reaching it may be and drag everything back into one clump. Given that they suspect the universe exploded into existence over 14 billion years ago you can bet that the universe starts to come back together (maybe for another big bang) it will be possibly hundreds even thousands of billions of years into the future.

That is a great find though, a super duper massive planet around a fairly average small star, but the only closest one and it having an orbit around it at that distance, a full rotation must take a looooooong time - thats like, just guesssing out of the blue, thousands of years (or rotation around our sun) to us. Staggering.

Universe is big people, this is one star, in one galaxy and theres a staggering number of both. did i mention the universe was big?

posted on Jan, 28 2016 @ 06:24 PM
link
I'd say it's a sub-dwarf, so essentially it makes up a binary system with the red dwarf. They kinda orbit each other around a common point between them.

posted on Feb, 5 2016 @ 12:38 AM
link
If anyone is interested, there's a new perspective on the Universe called The Paradigm of Types. The paradigm represents everything within the realms of cosmology and biology.

The paradigm indicates that all solar systems begin with nine planets, and that the planets are progressively destroyed by being drawn towards the central star due to the increasing emission (gravity) of the central star.

Also, the paradigm indicates that whereas there are 191 phylogenetic types of organisms on Earth, the Universe entails 211 types. The other 20 exist on another planet.

The paradigm is introduced in an essay called "Discovering the Universe with the Paradigm of Types", which is located at home.spin.net.au/paradigm/211.pdf

The paradigm represents a revolution in science.

originally posted by: eukaryote
The paradigm represents a revolution in science.


Does it? It kinda forgets the fact that stars lose their mass over their lifetimes, and therefore lose gravity.

If I m correct everything must orbit something .... eventually.

That depends on the type of star.

A massive star can become a black hole when it looses its grip on its structural integrity, and those things are not short of pulling power!

originally posted by: swanne
a reply to: Frocharocha

A star's gravitational field is never zero, it can get close to zero but never really reach it - that's why the bodies in the Oort Cloud still orbit the Sun even though they're over a light-year away.


nah. parts of the Oort cloud maybe from the formation of this solar system but the whole Oort cloud is not just a ring or shell of gas ice and dust or other debris from sol system. Each of the nearby stars has contributed to it and the Oort cloud surrounds all nearby stars such as AP AC and ACB. It is likely that there are similar clouds around other more distant stars and clusters of stars. Thus the newly postulated Neptune sized planet though it may travel in the fringes of the Oort cloud (using the most liberal estimate of the inner boundary of the Oort Cloud) would not be part of the Oort Cloud.
edit on 5-2-2016 by stormbringer1701 because: (no reason given)

That depends on the type of star.

A massive star can become a black hole when it looses its grip on its structural integrity, and those things are not short of pulling power!


A black hole that formed from a massive star actually has less mass than that star had. A black hole is formed from the stellar core, while the rest of the star is blown out in a supernova.

In any case, at a respectable distance from a stellar-mass black hole, gravity is the same as that star had, so the effect on the planets would remain the same.

posted on Feb, 5 2016 @ 09:59 AM
link
if the distant planet is a gas giant some 15x bigger than Earth...
it might be possible that it grew from a nucleus of say a couple thousand chunks of ice all balled together in that distant Solar Systems own Ort Cloud.

the ball of ice was so distant from the solar system star itself that it attracted and accumulated inter-Stellar gas which that frontier of space fortunately had in abundance... a million year orbit some 149 times further out than our own Pluto is away from our Sun would put that gaseous body more defined as a rogue planet captured by the red-dwarf central Star
(with a lot of gravitation help from the Ort Cloud of icy comets/asteroids that has all it's mass inside the rogue planets orbit)

I think the piece is a drummed up speculation to excite interest in a wide range of science
...instead of being swamped by social-media technology and devices that command one's attention