Police believe the fight erupted between rival people smuggling gangs against a backdrop of simmering tensions between Muslims and Christians in the camp.
David Michaux, a CRS anti-riot officer from the Unsa-police union, told Le Figaro: "There is a real problem of Muslims and non-Muslims. Most of the camp's 3,000-odd occupants are Muslim Kurds from Iraq, Iran and Syria but a minority are Christians from Iran.

"The Muslims are trying to expel the Christians from the camp," Mr Michaux claimed. 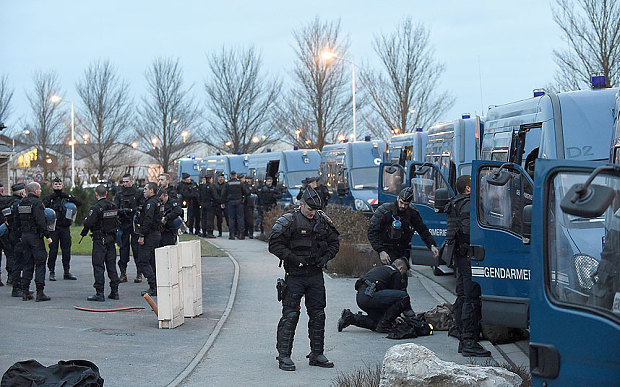 This is why they don't want people wandering around with cameras. The aid workers and supporters are coming out with more and more fanciful excuses for the camera ban at French migrant/refugee camps. The true reason is the criminals don't want evidence of who they are, what they do, and where they hide their weapons etc.

posted on Jan, 28 2016 @ 01:28 AM
link
a reply to: Kester
I'm noticing a media campaign against Kurds. BBC and now this. I'm not saying this story is untrue but in one morning I've seen two stories demonising Kurds.

The hate between sects of religious idiots is not going to end in my lifetime or anyone else's who is reading this.

The criminal gangs are the main focus. But when they can largely control a group everyone suffers.

Well the BBC story was about the PKK in Turkey. A few months ago they were heroes fighting ISIS. Now they are terrorists shaking the Turkish applecart. What's going on here?

After reviewing the BBC report again, it seems that theire is civil war kicking off in Turkey. A NATO member I must add. Things are escalating quickly.

originally posted by: Discotech
a reply to: Wide-Eyes


That's a pretty good play,plenty of Europeans likely feel comfortable with nato backing,watching a nato member suffer a similar fate to the rest of the middle east that might have a large resurgence of fear on the general populace

posted on Jan, 28 2016 @ 03:58 AM
link
There has been lots of fighting between different sects in Germany for some time now . This was a report from last October but just last week there was a similar situation m.spiegel.de...=www&referrrer=

Thats another thing that hasnt been thought out by EU leaders putting all these different nationalities and religions together was never going to work.

I believe at Calais there are terrorists being hidden, drugs and weapons that is why they dont want the cameras to see too much. The camp there is split into different nationalities Pakistanis, Eritrea, Somalia, Afghan etc.

"The Muslims are trying to expel the Christians from the camp," Mr Michaux claimed.

Well... they can talk can't they? They should expell themselves from the camp and go back home!

In a separate story, i've just read on skynews that Sweden are sending 80,000 Migrants back home... good news I'd say.

I'm sure it would be split, at least from my experience many Brits haven't much love for Turkey due to perceived human rights abuses, and I hope we don't forget the Peshmerga were seemingly the only people local who actually took the fight to daesh.

posted on Jan, 28 2016 @ 09:18 AM
link
The middle east and fanatical Muslims need dictators and it has been said here on ATS and its true. This is one reason why hardline Islam and Christianity cannot coexist side by side. The thing with dictators and the middle east is that for one up until the time they met their demise they had Western backing which meant they had military hardware and army's to wield it. It is not this alone though it is that the dictator is one of them and has the means to inflict violence and enforce rules. They need strict rules to live by in order for things to make sense for them and it has to be someone that believes in what they believe in. Christianity offers too much choice and acceptance it confuses and frightens them.

Disclaimer I know that their are plenty of muslims that have immigrated amicably with their host nations. I would say however that they are the exception to the rule. I would kind of call it westernized Islam where these few comparatively to the larger group understand that they can in fact practice their beliefs side by side with Christians in peace. The trend seems to be and I hate to say it is that the areas where the demographic lean heavy with christianity seem to be safer than the places that are overwhelmingly Islamic. Sorry guys I don't hate you I just don't know what the right answer on all of these global religious differences is or how to get to it in a reasonable and humane fashion.

Muslims and Christians have peacefully coexisted for centuries. Then the Muslims got the # bombed out of them and felt a little sour. Unfortunately the damage is done. Now we just have to ride it out.

posted on Jan, 28 2016 @ 03:37 PM
link
I wouldn't say that they have just mingled and everything was all good. Even during a point during the crusades they did coexist in the midst of a holy war but it was because of an uneasy truce between military commanders. Things were certainly not all hugs and rainbows. Remember I did say that it does happen but that does not mean that it is a good idea when dealing with large groups of migrant men. The point has been made that it would be one thing if the refugee's were mostly women and children but that is not the case. It is swarms of angry displaced military aged males that are the problem.

posted on Jan, 29 2016 @ 12:19 AM
link
a reply to: RainbowPhoenix
I agree. I was just alluding to the fact that all the countries we(the west) have destroyed in the last decade were secular before hand.