posted on Jan, 22 2016 @ 02:24 PM
link
This morning I read That Hillary fans were angered over a 5 minute brush off, this after having a singer Demi Lovato perform and draw a crowd. I started thinking that this was not logical that Hillary would not work the crowd, and she left them with a lot of questions. No attack on Sanders, nor much of anything was talked about by Hillary. 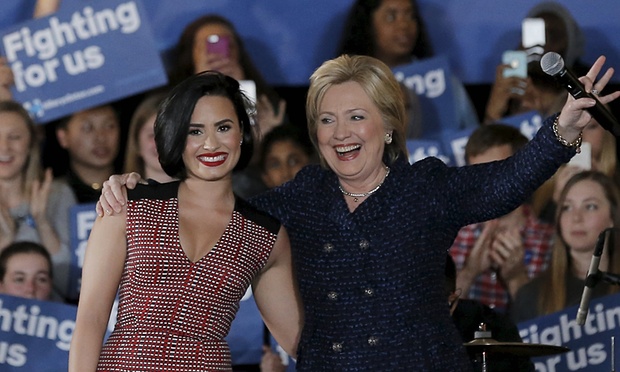 Hillary Clinton left her audience cold in Iowa City on Thursday night, after she spoke for less than five minutes to a crowd of more than a thousand people, some of whom had lined up for more than an hour to see her.

But Clinton did not refer to the Vermont senator, or much else, in her speech. The lack of length and substance of her address appeared to upset some in the crowd.

“It was like a political commercial,” said Allison Steigerwald, a 24-year-old graduate student at the university. “I thought she was saying goodbye to Demi and then she’d start her speech. But it never happened.”

“It was very short,” said Jennifer Marks, 22. “There were a lot of statements. Like: ‘We are we going to make things happen.’” Marks said. “No actual how.”

“I just feel bad for the people who got here at five,” she said.

So I ask ask you, why would an experienced politician in an important early state, where she she has found herself in a tight race, Iowa, why would she rush out of her own political rally???

There are rumours that Hillary is still suffering from a concussion:

The former president revealed that his wife's injury "required six months of very serious work to get over," he said during a question-and-answer session at the Peterson Foundation in Washington.

"They went to all this trouble to say she had staged what was a terrible concussion that required six months of very serious work to get over," he said. "It's something she never low-balled with the American people, never tried to pretend it didn't happen."

But Bill Clinton's timeline appears to differ from official comments from the State Department at the time.

She has medical issues and legal issues, and huuuuggge p.r. image problems.

Most of the people were there to hear Demi Lovato anyway.

That alone is enough to send Hillary into an uncontrollable konniption fit.

posted on Jan, 22 2016 @ 04:52 PM
link
I don't think there's anything wrong with her health. This is her M.O. in general. Give the little people a few minutes here, a few minutes there. Want serious time with her on the mic? Buy a $5,000 plate at a dinner. Supporters just tend not to see it.

Detractors shouldn't use right-wing sourced hooey though. No offense.

posted on Jan, 22 2016 @ 04:54 PM
link
Well if Hillary does get the nomination, it will be mighty interesting to see who the VP slot is awarded to.

Most certainly it would be that person as POTUS after Hillary either resigns from legal issues or her health.

originally posted by: tothetenthpower
Well if Hillary does get the nomination, it will be mighty interesting to see who the VP slot is awarded to.

Most certainly it would be that person as POTUS after Hillary either resigns from legal issues or her health.


She'll probably do what Obama did...choose a complete idiot as V.P., so nobody will want to see her step down.


Maybe not a bad idea.


Maybe not a bad idea.


Well, Biden DID say he'd be willing to serve 1 term.