Just so you know I haven't read the book, but I am feeling this series, however it look a lil too much like Lord Of The Rings, you know the quest to bring a seedling to some magical place going through demon , trolls, and bad human places ,plus that ass kicker from Spartacus Blood on the sand Manu Bennett as a kick ass Druid make it a must watch for me..slight nudity is involved.
edit on 21-1-2016 by Spider879 because: (no reason given)


Congrats on your milestone

posted on Jan, 21 2016 @ 11:51 PM
link
I've read the whole series a long time ago as a kid. Can't remember the story but remember that I really enjoyed all of it, maybe I should read it to my kids. Would love to watch it. I just love trolls and druids and fairy folk stories and I absolutely love make up and special FX that goes it to making fantasy movies. Thanks for bringing this out of the woodwork.

Can't say I'm that proud of it, it just means I spend a lot of time sitting on my ass looking at a screen. Lol.


Me too and while I am not a fan of magic I think of it in terms of "Any sufficiently advanced technology is indistinguishable from magic." - Arthur C. Clarke...

I really like the show. 5th episode this Tuesday. Never read the books, but I too thought the parallel to LOTR is pretty much the same.

I don't really watch shows like this, but this one is getting good.***

***Looks like a Sci-fi channel show. Unusual for an MTV production!

The show is actually doing the books justice at the moment. That's hard to do with Terry Brooks.

I'm very much enjoying it, I"m surprised MTV put up so much cash for production, but so far it's all smiles for me.

I'm most happy with the LOTR feeling anyway. Nobody has been able to capture that on TV yet to my knowledge.

posted on Jan, 22 2016 @ 10:46 AM
link
both shannara and the band of four series by ed greenwood, i wanted to see adapted for television.

but not by mtv. never by mtv.

Yes, even when the books were written it was a poor knock off of Tolkien. But let's be honest, Tolkien is the father of most of our current Fantasy genre. I have read the books several times when i was young and even fairly recently, they are following the plot rather loosely. The author Terry Brooks is fine with the changes. He is behind the series fully.

They spared no expense on the look, I like it so far. My only gripe is the Amberle character is played by someone who has real trouble acting. I don't know what she did to get the part, but acting was not part of it. Some of the scenes with her are excruciating for me to watch. Watch her facial expressions when she has an intense scene. It's like she doesn't even believe it so why should I. The other actors seem fine to me.

You have to sort of go along with the dialogue, which is all a nod to today's teens. But i am all for the show in general. LoTR really upped the bar for Fantasy imho. Before LoTR, I think a lot of the directors were not Fantasy fans and the resulting material was usually really cheesy. The D&D movies/shows are a prime example, always really poorly done and there is a whole world of material to pull from from it. But you need good acting to bring the characters to life, you need good plot and story and, of course, the look and feel adds to the suspension of disbelief. LoTR did everything right, I'm not talking about the Tolkien' books, i am talking about the movies. Anyway. That's my two cents.

I couldn't. The CGI is cheesy, the actors are all....so good looking? Why the hell is Alanon some handsome, beefcake?

It's just terrible IMO. Please, do yourselves a favor and get the audio books or read the books.

EDIT: Out of all the books, my favorite is still the first 3. It seems Brooks kinds of wafles and recycles a lot of stuff in his later additions to the Shanara universe.
edit on 22-1-2016 by MystikMushroom because: (no reason given)

posted on Jan, 22 2016 @ 12:28 PM
link
Oh, I just finished the entire Riyria Revelations by Michael J Sullivan. It would make a great movie/tv series too...good character development between the two princpal characters...outgoing, witty and charming Hardian...and dark, dangerous, grumpy and sarcastic Royce. They're like the odd couple. With swords. And some magic here and there... 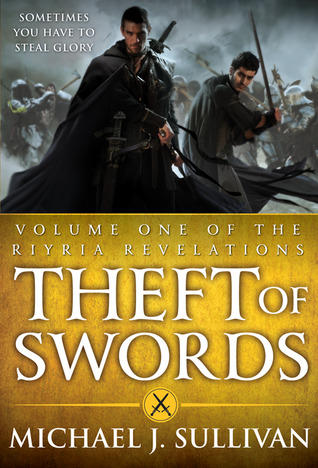 It's really quite good ... the audio book is done excellently as well.

posted on Feb, 25 2016 @ 03:46 AM
link
I'm enjoying this take on the books although it's been a quarter century or so since I read them. I can't remember everything in them but this is good. I do remember that the books were quite a while after the fall of man, IIRC, and this seems to be not very long after the fall. Some characters involved that weren't there but not too many and it's somewhat faithful to what I remember.

I haven't read the books but Im glad you feeling it, I loved the the shout out to Star Trek in the last installment.

I'm not a big Star Trek fan so I missed what you are referring to. It happens.

I do plan on listening to the audio books though, great suggestion.

Already deleted it so I can't go back and watch it. Since I'm not a big ST fan and I've already seen the episode I doubt re-watching it would enlighten me.