Detachable passenger aircraft design: The future or is there something wrong with this picture?

posted on Jan, 19 2016 @ 02:14 PM
link
A recent article illustrates an innovative design for an aircraft that detaches the cockpit from the cabin in an emergency.
The idea is that the passengers float down safely with a massive parachute, while the pilots can keep flying to safety.
It's already been shelved by airlines due to cost factors for now, but I think, as far as the passengers are concerned, more is wrong with this picture. 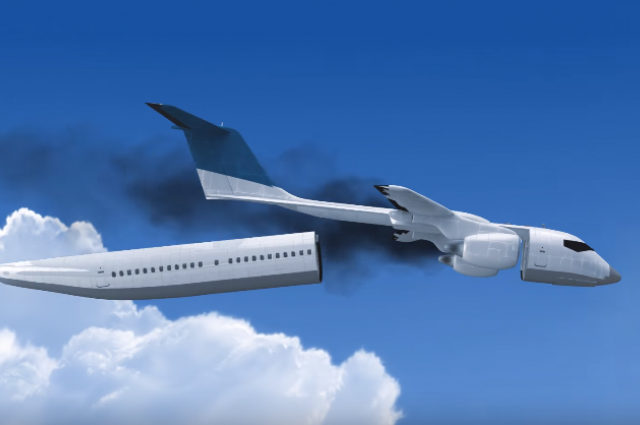 For the full article: www.iflscience.com...

Firstly, wouldn't the cabin section have to remain horizontal for the parachute to open, unless they want it to float down vertically, which means all passengers and cabin crew not strapped into their seats will fall out the bottom?

But OK, as long as it doesn't land on my head.

Wouldn't it be better to have potential cockpits at both ends (with expandable wings in an emergency for the cabin section), and then suicidal pilots, for example, can fly one way, and the passengers can be flown to safety via the other?

Not trying to be funny but should you not tell us what you think is wrong with it instead of playing a guessing game? After all, this is just a picture. The only thing I can see is the passenger section dropping, before the parachute(s) open?

Too much weight, complexity, and risk involved, in addition to cost.

posted on Jan, 19 2016 @ 02:23 PM
link
I've alays thouht that somehow safety capsules could be installed inside aircraft - i.e. a block of seats is its own capsule that can be released and float down to earth in case of emergency. The OP is teh same thing, just one giant capsule.
I prefer the idea of more individual capsules though as it spreads out the risk.

Cost and weight will always be the issue I guess, but I bet a plane with those sort of safety characteristics selling very expensive tickets would still sell out every flight.

that they're probably still traveling at several hundred miles an hour?

I'm not an engineer or knowledgeable in aerodynamics/physics, what else do you see wrong with the design?

Agreed, something wrong with that.

Can't imagine what it must be like in the passenger cabin to plunge 33000 feet to your death in an out of control dive.

Imagine the first drop in the worlds tallest roller coaster-- you come up over the hill, look down and at the bottom, the ride ends in the ground.

There is no alternative to mass transit that makes $en$e from a profit perspective. Issue parachutes, a hand gun, cyanide pills?

Actually, the oxygen masks that drop down in emergencies sort of help, pure oxygen combined with rapid breathing (from adrenalin) puts you to sleep.

The idea is that the passengers float down safely with a massive parachute, while the pilots can keep flying to safety.

I think I gave my misgivings, but maybe you saw my post before it was complete.
Would the cabin come down vertically or horizontally, and at what speed does it land?
And where (on whom) does it land, and does it resolve the problems of a water landing?
A parachute would drag it underwater even quicker?

Then, which section authorizes the split?
A suicidal pilot probably wouldn't anyway, so the cabin crew perhaps?
But are they always sane or of sound judgement?

posted on Jan, 19 2016 @ 02:32 PM
link
I'd be afraid of the people in the cockpit having the power to just eject the rest of the plane if they want to. Imagine a fire out of control in the cabin, they can't put it out, the plane is going to crash - so the pilot ejects the cabin and then lands safely.

Hypothetical of course, but I can't imagine any pilot that wouldn't do this if it was life or death.

Why don't they just have all the seats drop out with parachutes packed inside of them. Not cost effective sure but we're talking about alternatives to what we have today (Which is pretty much kiss your ass goodbye)

Putting aside the fact that passenger air travel is literally the safest way to travel, this design would not address the most dangerous aspects of flight (take off and landing).

If both engines blew out on take off, or a load shift happened, etc. by the time the capsule would be able to disconnect and slow down via parachutes it would be too late. Same thing on landing, say if wind shear or a microburst is encountered, they would be too low (or the atmospheric conditions would also negatively affect the safety capsule / parachute apparatus as well).

I think you're better off asking for a double wild turkey if flying makes you nervous, than trusting this idea.

originally posted by: Zaphod58
Apparently this part was missed:

The idea is that the passengers float down safely with a massive parachute, while the pilots can keep flying to safety.


Not missed at all, just laughable. A chute large enough to lower a whole passenger cabin safely to the ground, or float like a boat if "ejecting" over water? The engineering for that, including cabin 'capsule', seams, explosive bolts, inflatable pontoons, let alone that chute…. boggled.

The F111 Ardvark had a crew cabin eject mechanism…. care to comment?

nice idea but yes many flaws i can imagine

be better if each individual passenger seat was an ejector seat like pilots.

the roof just opens and then Bam! everyone shoots out with a parachute attached to the seat.
you might have the odd collision but the majority will survive at least

in addition each seat has GPS so they can be found as they might be at sea, and each chair has an inflatable thing in case you land in water.

I think that it's a neat idea, but like at least one other noted, I don't think that the cost involved (and then recouped through increased ticket prices) is necessarily warranted by the statistics concerning planes crashing.

But, it would be neat to make something like this possible for those who are so scared of flying that it would ease their minds a little. They'd pay extra for the piece of mind, but I'm sure that there are some who would be ready and willing.

As I think of it more, it could have merit on trans-oceanic flights where there is no good place to land...maybe...

originally posted by: SonOfThor
If both engines blew out on take off, or a load shift happened, etc. by the time the capsule would be able to disconnect and slow down via parachutes it would be too late. Same thing on landing, say if wind shear or a microburst is encountered, they would be too low (or the atmospheric conditions would also negatively affect the safety capsule / parachute apparatus as well).

Not if you have (drum roll!) a zero-zero cabin jettison system!

I can see it now...you could have really honkin' solid fuel thrusters pop out and shoot the cabin into the air, then use rocket propelled drogues to extract and reef the canopy in a blink.

Of course, you'd only be able to have a half dozen passengers or so, but it's SAFE.

The parachute would be attached at the top to keep it level, and it would have bags that would inflate prior to landing around the bottom of the fuselage, to soften the landing, as well as act as flotation devices in the water. It's similar to the ejection capsules used on the F-111 and early B-1s, but on a far larger scale.

As for who ejects it, that's just one of the issues that comes in to play. The most effective way to separate is explosive bolts. They're stable as far as turbulence goes, but they do occasionally misfire with age. If one fires, then you have a partially hanging passenger cabin, or a cabin that doesn't separate properly and damages the aircraft.

Hydraulic, fuel, and air lines go through the passenger cabin to the rest of the aircraft. They'd have to find ways to reroute them that bypass the cabin, which adds size and weight to the aircraft, in addition to the safety system, etc. There are a lot of things that would have to be changed, which would probably end up pricing the aircraft so high they couldn't afford them to begin with, and making travel costs so high the regular person couldn't fly anymore just so the airlines could make enough money to stay in business.

Not to mention that most accidents occur on landing and take off. I don't see the parachutes effectively opening at those altitudes, no matter what the video may say.

And the F-111 capsule worked great. We had several crews saved by it at Pease and Plattsburgh.

It doesn't necessarily have to be one huge parachute, you could use multiple chutes. The Aardvark used two or three for the capsule. As for floating, the Aardvark had, as I commented in my post above, air bags that were used at landing that doubled as a raft in the water. The capsule would float for hours before the bags started to deflate. Plenty long enough for a rescue craft to get to them.

while the pilots can keep flying to safety

I think I would go with the pilots...

Reminds me of an Apollo landing, only bigger.

It would have to have landing gear like the Q400, where they retract into the wing/engine.